What Are Datil Peppers?

Plus, 4 places to taste the peppers' sweet heat in Florida.

Freelance food and travel writer Beth Graham worked in public relations for more than 25 years representing clients in the food and travel industries. Today, as a freelance writer, she draws on that experience to tell the stories of the people, food, and places along her journeys. Her stories have been featured in many food and travel magazines. She is a passionate home cook and missed her calling to attend culinary school so one of her passions is interviewing chefs and telling their stories.

Pepper aficionados, listen up. If you think you’ve tried them all, there’s one more pepper you need to add to your tasting repertoire. But you’ll have to head to America’s oldest city, St. Augustine, to find it.

That’s because the datil pepper only grows in this part of North Florida thanks to the right combination of salt air and humidity. Farmers across Florida have tried to grow these finicky peppers season after season but with little success.

So what makes this elusive pepper so special?

Peppers can add heat to foods, and they can add flavor. But the datil pepper does both adding a unique, sweet heat to foods.

Is a datil pepper hotter than a habanero?

With a heat index similar to the habanero—100,000 to 300,000 on the Scoville scale—datil peppers are sweet, tart, and have an almost fruity flavor that make them the perfect complement to everything from seafood to vegetables to craft cocktails.

These small, yellow-orange peppers are a variety of the Capsicum Chinese species, also known as the "yellow lantern chili.”

We have St. Augustine’s Spanish heritage to thank for the pepper’s origin and popularity. Some believe it was the Minorcans who brought the datil pepper with them when they arrived in 1777.  And you’ll find Minorcan and Spanish dishes on menus throughout the city, with datil peppers flavoring some of the classics.

St. Augustine takes such pride in its home-grown specialty that the city celebrates with the Datil Pepper Festival each October.

Where to try datil peppers

Mike O’Steen might be the foremost expert on datil peppers. The peppers have been grown and used in his family for generations, and as a direct descendant of the Minorcans, he pays homage to their heritage with his line of Minorcan Mike’s products.

He uses roughly 100 pounds of peppers a year in his sauces, salsas, jellies, rubs, and vinegars. You’ll often find him at one of the local farmers' markets or you’ll find his products used in the kitchens of local restaurants."

"It’s hard to find these peppers outside of North Florida. People who love peppers don’t know what they’re missing so my goal is to get more products out there so everyone can enjoy the datil’s unique flavor profile," he said.

Datil peppers, available most of the year, can be found in everything from pizza sauces to meat marinades to vodka that gives your Bloody Mary the perfect kick.

They have also made their way into the hands of local chefs who take great pride in showcasing this local treasure including St. Augustine’s signature dish, Minorcan clam chowder. O’Steen’s Restaurant (Mike’s family’s restaurant) has been serving this datil-spiced comfort food to tourists and locals since 1965.

Michael Lugo, the owner of fine dining spot Michael’s, says that his Plantain Bon Bons, sweet plantains wrapped in prosciutto with datil guava glaze, are one of his menu’s most popular items.

As one of the country’s top tourist destinations, St. Augustine attracts travelers for its rich history. But it’s also becoming a foodie destination for the local seafood and Spanish specialties.

Travelers would be remiss to visit without tasting the datil pepper, whether it’s in a dipping sauce with the South’s iconic fried shrimp, a datil-infused blueberry jelly on biscuits, or as a salsa on everything from burgers to eggs. Fortunately for most visitors (and locals), you can find datil pepper products in gift shops all over the city, making it the perfect souvenir to take home. 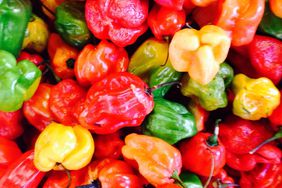