It’s the most wonderful time of the year in Virginia’s capital.

Paige Porter Fischer is a writer and editor with 23 years of experience in journalism. She has covered travel, food, architecture, home design, celebrities, and lifestyle for national magazines and newspapers. Paige has been a features writer for Coastal Living, West Coast Editor for Better Homes & Gardens, Editor-at-Large (lifestyle) for Sunset magazine, and a weekly design and travel columnist for the San Francisco Chronicle. As a freelancer, she scouts locations, pitches stories, produces and art directs major photo shoots, writes and edits features, and consults with interior designers and architects to help develop content for their web sites, writing everything from bios to blog posts. She is a storyteller who loves the convergence of words, pictures, and people. Her work appears in publications such as Coastal Living, Southern Living, Better Homes & Gardens, Country Home, Veranda, Sunset, Luxe, Real Simple, Modern Farmhouse, and Cottage Style.

Cary Street is Richmond's main artery of shops and restaurants. Stop by Can Can Brasserie, and enjoy a cappuccino at the 50-foot-long zinc bar—be sure to get one of their beloved fruit breads too. (Cherry Almond, Cranberry Pecan, and Apricot Pistachio are all perennial favorites.) Nearby, Crème de la Crème makes browsing for presents a treat. A French-inspired store, it features exquisite home goods you may not stumble upon anywhere else. Buy organic skin-care products at Mamie's Apothecary; a stroll through this serene shop feels as relaxing as a visit to the spa. Down the road is World of Mirth, the city's best toy store. Next door, BBGB has a carefully curated selection of books in a gallery-like environment. Mongrel is an eclectic place that prides itself on selling the most uncommon gifts and cards you'll find in Richmond. Grab lunch on the weekends at The Fancy Biscuit, where a fried chicken sandwich on a flaky, buttery biscuit will make your day. Score a slice of the delicious Christmas Cake (chocolate cake infused with an Andes mint-filled mousse) at Shyndigz. The Byrd Theatre, a landmark cinema that opened in 1928, presents holiday movies throughout December. Many of the daily showings include a caroling sing-along with the theater's house organist playing the Wurlitzer. 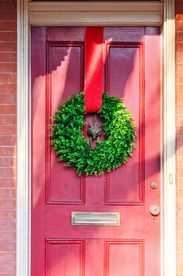 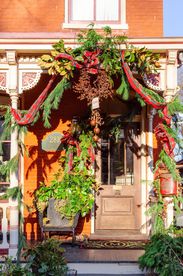 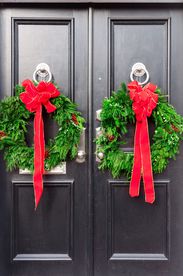 One of Richmond's most storied neighborhoods is Church Hill, not far from downtown. You'll want to stroll the streets (studded with elegant row houses decorated for the holidays) near picturesque Historic Saint John's Church, where Patrick Henry famously gave his "Give me liberty, or give me death!" speech. Breakfast at Sub Rosa Bakery is a must. Many claim it's the best one in town, and their croissants might convince you. Pick up lunch (try the Reuben) at Union Market and unique gifts at Dear Neighbor. Locals flock to The Roosevelt for upscale Southern cuisine (and such small plates as BBQ Pork Rinds with house-made pimiento cheese or cornbread with whipped maple butter). They also frequent Metzger Bar & Butchery for the duck breast, spaetzle, and pork schnitzel. Alewife is the seafood darling in RVA, where the Siren's Song sampler may be the greatest gift you give yourself this year. Don't miss dessert at Proper Pie Co. Seasonal favorites like the Pumpkin & Salted Caramel go fast, so get yours while you can.

In The West End, you will want to start your day at Westhampton Pastry Shop, an institution where lines form for Christmas tree coffee cakes and "Fadeaway" bakery confections available only during the holidays. Hit the Shops at 5807 for booth-style browsing in a large market hall. Take a short walk over to Grove Avenue, where you can be fitted for a custom suit from Richmond-based menswear brand Alton Lane, grab presents for her at Nellie George, and buy decadent handcrafted sweets at Gearharts Fine Chocolates. Eat lunch at Jack Brown's. The burgers here are legendary, but save some room for supper at Shagbark, featuring artisan cocktails and a menu that celebrates Virginia.

Cross the James River on the photogenic Nickel Bridge (the toll is now 35 cents, but the nickname remains), and hit the artsy Southside. Blanchard's Coffee Roasting Co. is popular with java connoisseurs, and WPA Bakery has tempting homemade treats. Head to Nest antiques for one-of-a-kind gifts. At dinnertime, a cozy booth at Laura Lee's is the perfect spot to relax. Then stop by The Veil Brewing Co.'s new outpost on Forest Hill Avenue for a craft IPA. 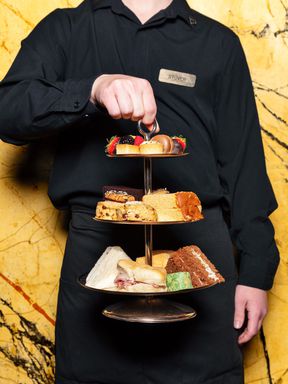 Sandwiches and treats are served during Holiday Afternoon Tea at The Jefferson Hotel. 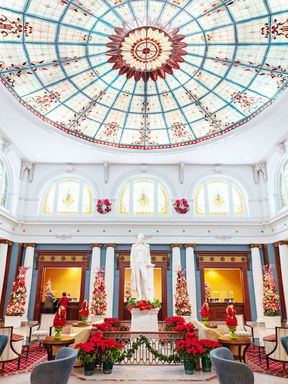 Richmond is passionate about its seasonal traditions, many of which require some advance planning.

Mandy Scandlen, who moved here from Washington, D.C., loves tea at The Jefferson Hotel. "The day the reservations start, you have to be up early and call when the lines open in order to get a table," says the mom of four. "There's not a square inch of the hotel that hasn't been touched with decorations. Getting dressed up to go downtown for tea is what signals the arrival of the holidays for me."

Another can't-miss is the RTD Tacky Lights Tour. (A list of showy stops is posted annually on the Richmond Times-Dispatch website.) "My family adores this, and it always makes me giggle with joy to see these wild and crazy displays people put so much time into," says English transplant Alexandra Krost, a film producer. "There is nothing quite like it back where I come from." 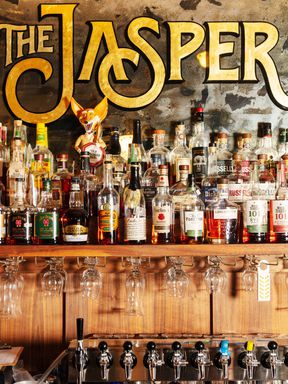 Stop by The Jasper, one of Richmond’s most popular bars, to enjoy a cocktail and chase the chill. 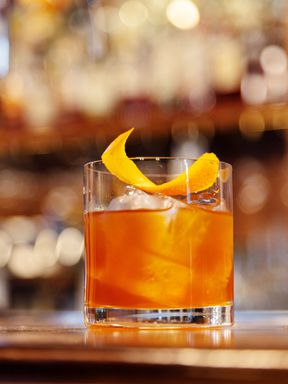 Peyton Jenkins, co-founder, and president of Alton Lane, shares his two must-dos: "First, get dressed up, grab some friends, go to Lemaire, treat yourself to a cocktail (the 1895 will do), and find a seat in the Rotunda room to take in all the decorations. Second, head to my favorite cocktail bar in the city, The Jasper, where they do the holidays right. It's Richmond's version of Rolf's in New York City. Get there early, or dress warmly, as you'll have quite the line to wade through."

Lillian Bennett Saadatmand, principal and owner of Lillian Bennett Studio, loves wandering the illuminated Lewis Ginter Botanical Garden and then going to the Quirk Hotel for a cocktail by the pink Christmas tree. Artist WonJung Choi and her husband, glassblower Bo Yoon, bundle up for long walks with their daughter through the Fan District to the Virginia Museum of Fine Arts (VMFA), where admission is free and the cafe, Amuse, serves a special holiday luncheon on Christmas Day.

For creative consultant Courtney Ferrell, nothing else can compare to the Richmond Community Nativity Pageant, an annual event held since the 1920s. "It's one of our richest traditions, with people in the community taking part in it every year on 'Christmas Adam,' which is December 23," she says. "Listening to everyone singing 'Silent Night' is one of the Hallmark moments of the season for my family."

The Jefferson Hotel, which first opened in 1895, is a Richmond institution, especially at this time of year. Locals flock here for drinks and dinner at Lemaire, while out-of-towners come for food and festivities—such as the Holiday Afternoon Tea and the impressive 30-foot Christmas tree, which will be shining on November 29, the same day the giant gingerbread display will be unveiled. The seasonal house cocktail is a Smoking Cigar made from Lemaire's barrel-select Elijah Craig bourbon.

At the modern Quirk Hotel downtown, the signature pink Christmas tree in its stunning arcade is an homage to the happy hue that adorns this chic stay. The Quirk's thoughtfully curated boutique is the ideal spot for finding gifts and stocking stuffers.

Insider tip: Both the Quirk Hotel and The Jefferson are near the Science Museum of Virginia, where Richmond's annual Christmas Parade begins. 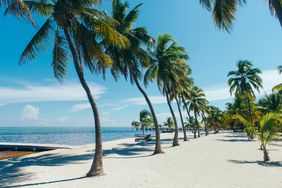 The Best Mother-Daughter Vacations to Take This Summer 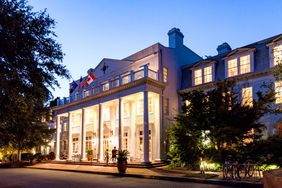