Beaches, seafood, and family fun...what's not to love?

Once a peaceful fishing village, Chincoteague Island, Virginia, now bustles with visitors, welcoming them with delicious local seafood, abundant lodging, shopping, and family activities. It's a great spot to visit any time of year, but this Eastern Shore island especially shines as a summer destination. In summer, 50-cent trolley rides whisk people around town with stops at the downtown shopping district, carnival grounds, community center, Museum of Chincoteague Island, and Chincoteague Chamber of Commerce. This laid-back town offers relaxing beaches, plentiful wildlife, and fun annual traditions, with its pony swim attracting thousands of visitors each year. While summer is always a high season, repeat visitors often prefer fall, when most of the tourists (and mosquitoes) have dispersed. Take your pick; you can't go wrong with a trip to this charming island. Read on to see why Chincoteague is a must-visit travel destination.

Fishing Village: Then and Now

Cradled between Assateague Island and the Virginia coast, Chincoteague is the smaller of the two islands and is known as the gateway to the southern part of Assateague. The waters of Assateague Bay and the Atlantic Ocean supported island growth, and now they entice many licensed anglers to fish the area beaches and inlets, which are ripe with flounder, striped bass, and other game fish. For some quick and easy fun, fish or crab at Chincoteague Veteran's Memorial Park. No individual license or permit is required on the pier.

You'll climb 175 steps up a spiral staircase to reach the top of the lofty Assateague Lighthouse, but the breathtaking panoramas of Chincoteague and Assateague islands that you'll enjoy from the viewing platform are worth the effort. Pause for a moment, and you might see a few bands of Virginia's southern herd nibbling grass at Black Duck Marsh.

Plan for the Pony Swim

While the small coastal community offers many family activities, all are dwarfed by the area's most famous celebration, the Chincoteague Island Pony Swim. Virginia's herd of wild ponies, owned by the Chincoteague Volunteer Fire Company (CVFC), grazes with permission on the southern part of Assateague Island. Each year in late July, Chincoteague's population of about 3,000 (humans, that is) swells to 10 times its usual size as tourists and former residents make the pilgrimage to witness the event.

Made famous by Marguerite Henry's novel Misty of Chincoteague, this renowned festival is now a weeklong affair. "Saltwater Cowboys," members of the CVFC who are skilled horse wranglers, move the northern herd along the Atlantic coastline during the popular Beach Walk to join ponies in the Southern Corral. The wildlife refuge opens early that day with limited parking, so visitors and locals are encouraged to bike or hike in.

The Pony Swim occurs on the last Wednesday before the last Thursday of July and always starts during the slack tide—a 30-minute lull between low and high tides when there is no current. Thousands of people wait for hours to watch the horses make a six-minute swim across the narrow channel separating the two islands.

After a rest, the ponies parade to the carnival grounds for the evening. The foal auction on Thursday helps control the pony population and also provides funding for the CVFC and for veterinary care for the animals during the year. The remaining adult ponies, along with foals not mature enough to be separated from their mothers, return to their grazing grounds.

"We haven't missed a Pony Penning in more than 20 years, but the sunsets, beaches, and fishing are what keep us coming back from spring through fall," says Northern Virginia resident Doreen Meadows. Her advice: "Slow down, and enjoy the town. You're on island time."

The annual Pony Penning and the popular Misty franchise are credited for Chincoteague's successful transition from commercial-seafood producer to tourist attraction, but the area has even more to offer.

You can't visit Chincoteague without indulging in some fresh local fare. At the popular Pico Taqueria, the inventive taco menu encourages hungry diners to try several options, such as The Main Street (seared shrimp, slaw, and chipotle creme fraiche) or The Maddox (local fried oysters topped with pickled carrots and Thai basil). Their modest pricing makes it easy to experiment with different options and mix and match to create your ideal spread. When it's time for dessert, you'll discover the reason for the long line of people queued up at Island Creamery. Their small-batch ice cream and homemade waffle cones are a national phenomenon and an island treasure. Go online to see dozens of daily flavors.

For dinner, AJ's on the Creek skirts the line between casual and upscale with tables covered in crisp white linens and topped with paper napkins and bottles of hot sauce. Seafood lovers can find the best of the best of the Eastern Shore catches here. Seasonal soft-shell crab is served deliciously fried on platters, and a romaine salad is transported into sublime territory with a zesty citrus Caesar dressing, Parmesan crumbs, and crisped bread.

Hotels situated along Main Street are within walking distance of shopping, dining, and trolley stops, and many of them also offer visitors some beautiful sunset views across Chincoteague Bay. The Island Resort, Waterside Inn, and Marina Bay Hotel & Suites are all great options for travelers and can give you easy access to the island's fun attractions and seasonal draws.

When it comes to planning a visit to Virginia's Eastern Shore, you'd be remiss if you skipped a trip to Chincoteague, where exciting experiences abound, from bites of fresh seafood to seeing the annual Chincoteague Island Pony Swim. With all of the fun on offer, you might forget to leave some time for relaxing on the beach, but we're here to remind you to save a few tranquil hours for the sands too. It is a coastal vacation, after all. 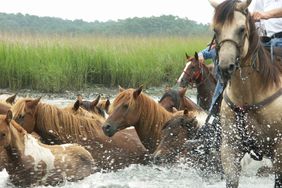 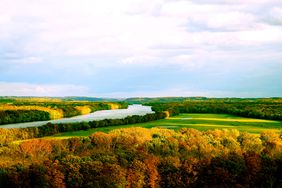