This coastal escape has been flying under the radar—but not anymore.

This friendly town on the Chesapeake Bay feels a bit like Mayberry. Here on the southern end of Virginia's Eastern Shore, kids shuffle down the pier with fishing poles and Cokes, wispy-haired men swap stories outside the hardware store, and the whole place seems to tuck in for the night not long after the sun goes down. But Cape Charles is decidedly more cosmopolitan than Andy Griffith's stomping grounds.

Once the economic hub of the Eastern Shore, Cape Charles settled into a sleepier routine with the decline of the railroad industry and the opening of the Chesapeake Bay Bridge-Tunnel. But more than 50 years later, the salty little hamlet has officially made a comeback, holding tight to its small-town character even as it welcomes a new and growing crowd of beach lovers. Now meet the folks ushering Cape Charles into its most exciting chapter yet.

Swing by family-owned The Bakery on Mason for warm pastries and picnic-perfect sandwiches. Settle into Ambrogia Caffe & Enoteca for homemade pasta, fresh seafood, and beautiful desserts. Slurp local oysters and catch the sunset from the deck at Shanty restaurant. 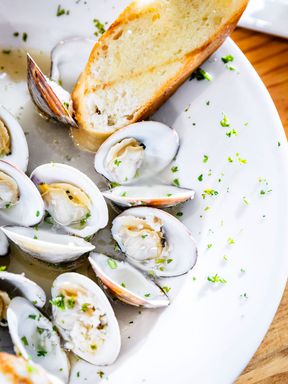 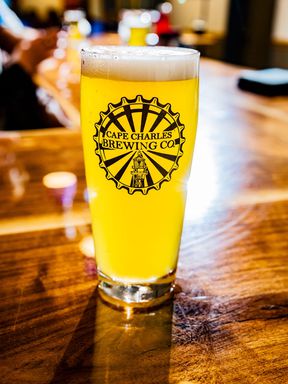 The Brown Dog Ice Cream owner, Miriam Wagner, never planned to have a scoop shop. "My then-husband and I were in Virginia Beach for a wedding," she says. "We had a little bit of time to kill and had never been over the Chesapeake Bay Bridge-Tunnel, so we said, 'What the heck! Let's see what's on the other side.' " There, they found Cape Charles, a quiet bayside haven. Smitten with this place, they closed on a house just 15 days later—something Miriam says is not altogether unusual for the area. "That's the story of so many people who live here," she says. "They come, they fall in love with it, and they buy something."

That was in 2005. Then, seven years later, Miriam found herself with another piece of real estate—a rented retail space on Mason Avenue, the town's main drag—and no idea what to do with it. "I thought, 'What does a beach town really need?'" So then she opened Brown Dog Ice Cream, where the tasty flavors are determined by what's in season and available just down the road. "The old adage, 'A rising tide lifts all boats,' is very true here," says Miriam. "To make our coffee ice cream, we source from the local roaster. All the farmers come and bring me the produce that is freshest to use. If I find myself needing more peaches, they will let me go pick them."

While the menu (which features coffee and doughnuts in addition to its inventive ice creams) changes daily, the welcoming atmosphere at the shop and across Cape Charles, in general, remains a constant. "There is a sense of community here, even if you're just visiting this area," says Miriam. "People will come and stay for a week. By the second day, we've talked to them and know who they are. And by the end of the week, they will come in and tell us, 'We're really sorry that it's our last day, but we'll be back next year.' " 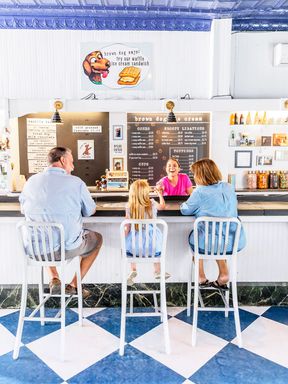 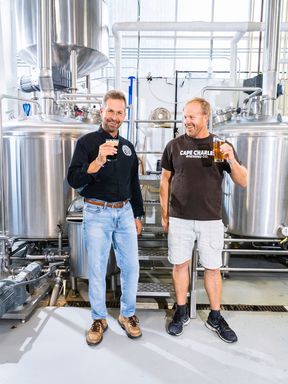 Mark and Chris Marshallare siblings, business partners, and near-perfect foils for each other. Mark, the self-proclaimed "serious brother," wears a collared shirt and wiry glasses. He talks about things like the town's old "cash economy." Chris, aka "fun brother," looks more like a surfer than a sales guy and wears a T-shirt he tie-dyed himself. But that's probably why the two work well together—and also why their Cape Charles Brewing Company enjoys so much success. "We wanted to create a true destination: a place where you could have a great craft beer, eat good food, and listen to music," says Mark.

For Chris, the proof that they had done just that was parked right outside—at least before the coronavirus pandemic. He pulled into the brewery parking lot one day to find license plates from all over: Pennsylvania, New Jersey, and New York. Now, as people begin to feel safer and more comfortable traveling, the brothers hope to see an entire lot again this summer. "You have this pristine piece of geography here," says Mark. "It's a little slice of paradise that everybody is finding out about and coming down to discover."

Just east of the hardware store is Hotel Cape Charles, a sleek boutique stay that offers complimentary beach cruisers for guests. Hotel Cape Charles makes sunny days out on the sand a breeze. Guests at this hotel can help themselves to complimentary bicycles, beach chairs, and towels. Vrbo and Airbnb also have plenty of good options for visitors who want a little more space.

Families will love Cape Charles Beach, as the waters of the Chesapeake Bay are calm and shallow at this vast public stretch of shoreline. Rental company SouthEast Expeditions offers stand-up paddleboards, kayaks, and guided excursions. Paddle to a wine tasting on their Chatham Vineyards tour. Shop the length of Mason Avenue for unique souvenirs. Pop into Moonrise Jewelry for fish-leather accessories, or stop by Gull Hummock Gourmet Market to sample local wines and snacks.

The Sabo sisters, Carol and Beth Ann are not very good at retirement. "The joke on the Shore is that everybody has two jobs," says Beth Ann. "We already had second jobs (I train dogs, and Carol owns Machipongo Trading Company up the road) when we had careers. Once we retired from our full-time gigs as an equine vet and forensic scientist, we just needed another thing to fill the career space." They did that with coffee, bagels, and gently used books. 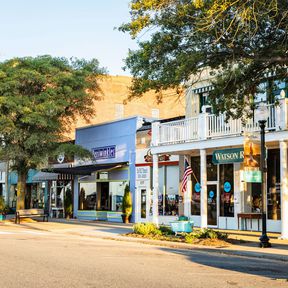 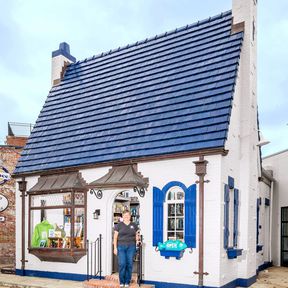 In November 2018, they opened Peach Street Books in a light-filled 1930s building that had been a Pure Oil station and then a garage. "We love the feeling here," says Beth Ann of the cottage-meets-contemporary space. "We knew from the plans what it would look like but not what it would feel like—welcoming and cheery. It has historic angles but is still modern, which is very much like Cape Charles itself." For the sisters, the bookstore is a means of connecting with everyone who meanders to this Eastern Shore. "When you go into a town and see that there are other people who love books and reading or writing, it just gives you a good feeling of community," says Beth Ann. "It makes the world seem both smaller and larger at the same time."