Deep in its ridges and valleys, the Texas Hill Country has spectacular seasonal color—if you know where to look.

Our cell phones hadn't had a lick of service since we'd passed the last gas station at least 30 miles back. No pings or rings of new emails and texts piercing the air, just a downloaded Willie Nelson album playing on a loop. It had also been a while since we'd made any turns or seen any other cars. Each side of the curving road was lined with untouched grassy terrain and the occasional herd of cows or bison behind fences, with no people in sight—until a sign eventually pointed us in the right direction: Utopia, Texas. My road trip pal and I were on the hunt for fall color in what seemed like the most unlikely place. But then we saw red.

When people think of Texas, "fall" and "color" might not be the first two words that come to mind—"desert" and "scorpions," maybe. But the Hill Country, an exception, is renowned for having enough elevation and greenery to deserve its name. People come here to explore the winery trail in Fredericksburg or go tubing down the river in New Braunfels. There isn't nearly as much talk about the one-stop towns settled deep in the region, the ones with limited cell service, like Utopia. Remarkably, many Texans have never been to this rural area or even heard about the two state parks nestled covertly into the wild landscape.

Little do they know that this is where autumn puts on one of its final and most surprising shows.

Long after the GPS had stopped working, Utopia came into view like a humble mirage. The strip of shops and diners could be missed in a blink, but the options are more than sufficient for the size of the constituency, which hasn't grown much since Utopia was established in the late 1800s. The town's population rings in at a whopping 167. For this small crook of Texas Hill Country, that's big. There's a sign that greets visitors with a somewhat ambiguous message: "Welcome to Utopia, a paradise. Let's keep it nice."

Anyone passing through town is likely here for two reasons: Lost Maples State Natural Area and Garner State Park. Utopia is located smack-dab in the middle of the protected sites, with each around the same distance from the main drag in perpendicular directions. If you're ambitious, you can visit both destinations in a day. After remaining little-known and crowd-free spots for decades, they've both seen surges of visitors in recent years, thanks partly to a larger public turnout at national and state parks in general. That and people have found out about the fall color.

"Once the pandemic started, our tourism increased quite dramatically," says Lisa Fitzsimmons, who has been Lost Maples State Natural Area's superintendent for four years. "It pushed everybody outside to go seek something new."

At nearly 3,000 acres, Lost Maples State Natural Area contains the headwaters of the Sabinal River and trails that lead up to views of undisturbed rolling hills. Each year, once the leaves have already changed and dropped to the ground in heaps throughout most of North America, the park's famed bigtooth maples begin their show. Bursting into brilliant shades of red, orange, and yellow during late October and November, they descend upon their hot, dry surroundings like a seasonal miracle.

"This park is 43 years old," says Fitzsimmons. "When it first opened in 1979, it was a sleepy little place. Not a lot of people knew about it, and really only the locals were aware of the maple trees in this canyon." A Texas Hill Country native, she lived in the area at the time. "I came here a month after it opened, and there wasn't anyone around," she recalls.

Biologists would say that bigtooth maples aren't even really supposed to be in this part of the state, objectively speaking, but these hardy trees are survivors from the Ice Age that first covered the continent over two million years ago and lasted until about 10,000 years ago. After the planet started thawing and warming up, they evolved to survive in hotter temperatures, mirroring a long-held Texas attitude of resilient stubbornness.

The park is so named for that very reason. These maples are, well, lost—out of place. They sit at the entrance, flank the trails, and paint the horizons of the scenic overlooks, having forged an improbable home of their own in the Sabinal Canyon.

Anyone planning to visit in late autumn should heed the high attendance numbers and book a reservation well in advance to avoid being turned away at the gate, with only rogue glimpses of the fleeting red show to remember. "This isn't a Vermont or Maine fall. This is a Texas fall," Fitzsimmons tells out-of-towners.

Less than 30 miles away, Garner State Park bears the season differently. Autumn colors hug the Frio River, creating a sparkling, gilded reflection on the water's crystal clear turquoise surface. Towering bald cypress trees with trunks 5 feet wide line each side of the curving river, their large exposed roots (or "knees") gripping into the river's banks. The leaves turn bright shades of sherbet orange and yellow during autumn, blanketing the park in a golden-hour haze.

A tubing and swimming destination in the warmer months, Garner State Park sees more visitors year-round than the nearby natural area. During fall, temperatures are often still high enough for enjoying the water—but they aren't sweltering—so you can swim, hike, view the changing leaves, and take advantage of the park's more developed campsites all in one trip. Weekends can get crowded, but weekdays are quieter, meaning the short, steep hikes to various overlooks—including Old Baldy (the park's most notable hill)—are more private.

Heading down the 15-mile stretch back to town from Garner State Park, it'd be impossible to find Laurel Waters' tree houses without her leading the way. A Texas native and longtime Utopia local, she grew up climbing the trees and swimming the waters of the area with her family before later creating her own piece of paradise, which includes a Saturday-only restaurant (The Laurel Tree) and four luxury escapes (Treehouse Utopia). Reservations for both get snapped up quick, especially in autumn. 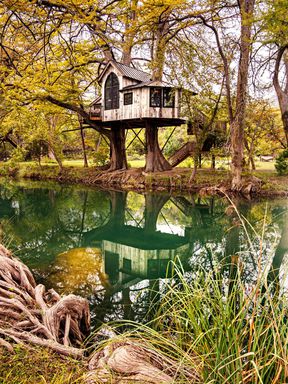 At Treehouse Utopia, book the Chapelle. 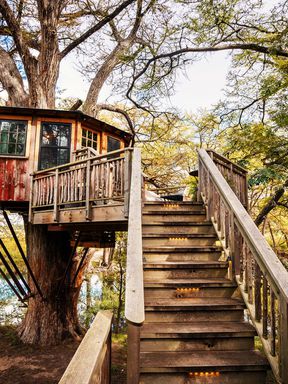 After attending cooking school in France as a young adult, Waters returned home with the dream of opening a destination bistro that would draw people from across Texas to this secluded corner of the Hill Country. She made the vision a reality in 2004, and after only two years in business, she expanded, doubling her restaurant's size.

About a decade later, she decided to build a private-dining tree house in an over-450-year-old live oak in the backyard, with help from Pete Nelson of the popular television show Treehouse Masters. (He had been inspired by the massive oak while he and his crew ate dinner at her restaurant after filming in the area.) "Everyone kept asking why they couldn't spend the night here!" she laughs. "So eventually we decided to give them the chance."

Waters leads guests individually to the property to ensure utmost privacy and tranquility. "I want people to feel free to unplug from real life, and what better way to do that than in a tree house in the woods?" she says. All four accommodations are built into centuries-old bald cypress trees, one of which Waters says has been estimated to be around 800 years old. Each is fully furnished and outfitted with an outer deck and a bathroom boasting a walk-in shower, making it rustic but still comfortable.

Watching the sunlight peek through the trees' orange leaves as water trickles in the translucent swimming hole that's just yards away, you can easily see what she envisioned: a hidden utopia within Utopia.

Around 45 minutes outside town, our cell phones spring back to life, pings and rings intruding on Willie Nelson's chorus. He was probably singing about Texas. It's rumored that these secluded roads used to be among his favorite to ride alone on his motorcycle. If he knows about the Hill Country's autumn secret, I don't recall him ever singing its praises. Perhaps that's just to help it stay hidden awhile longer. 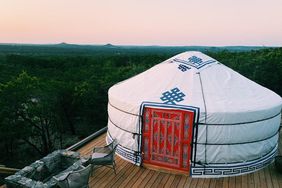 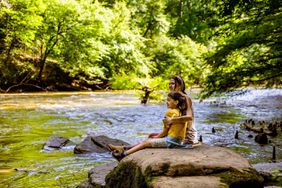 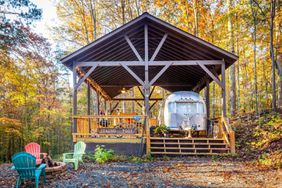 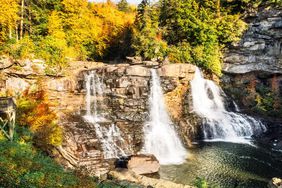 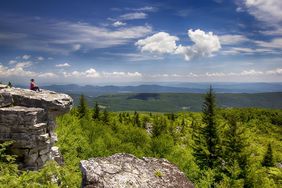