Logan Ward is a journalist. His work has appeared in ARCHITECT, The Atlantic, Garden & Gun, House Beautiful, Men's Journal, National Geographic Adventure, New Old House, the New York Times, Outside, Popular Mechanics, Popular Science, Preservation, Smithsonian, Southern Living, This Old House, and more. He is the author of See You in a Hundred Years: One Family's Search for a Simpler Life.

The number one selling point for San Marcos is its location. A gateway to the Hill Country, this Central Texas college town is sandwiched between two of the most desirable cities in the U.S.—Austin and San Antonio. Thousands of years ago, prehistoric people came here, no doubt for the blue-green, spring-fed river and the mild climate, which combined to sustain a plenitude of life.

The pristine San Marcos River runs through more than 130 acres of town parkland, providing many sites for swimming, snorkeling, and paddling. The source, Spring Lake, is on the campus of Texas State University, where The Meadows Center for Water and the Environment offers glass-bottomed boat tours. The headwaters are a nature lover's paradise, providing habitat for eight rare aquatic species, including the San Marcos fountain darter, a blind salamander, and a variety of wild rice.

With more than 38,000 students, Texas State University (home of the Bobcats) keeps the community young and vibrant. The school is a hub for the arts and boasts a fine performance center. "Over the past 25 years, I've met count-less prospective new residents," says Jason Mock, president of the San Marcos Area Chamber of Commerce. "I've learned that older people want to be where young people are. They tell me, 'I'm retired from nine-to-five, butI want to stay engaged in the community.' San Marcos allows for that."

Another benefit of moving here: Texas is one of only seven U.S. states that don't have an income tax. But the word is out about San Marcos. In 2016, the large North American developer Brookfield Residential chose this as the site of Kissing Tree, a 3,000-home community catering to those who are 55 and up. 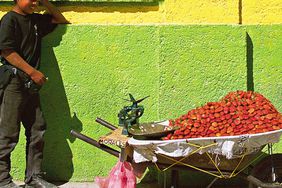