Hundreds of whooping cranes spend their winters on the Texas coast.

Caroline Rogers
Caroline Rogers is the travel and culture editor at Southern Living, where she writes and edits travel stories exploring the American South. She also contributes articles about books, arts, and the outdoors to the brand's digital platforms. She joined the magazine in 2016 and since then has reported on the beaches of the Florida Keys, opera in Houston's Theater District, and waterfalls across West Virginia, among many other spaces and places.
Southern Living's editorial guidelines
Fact checked by
Khara Scheppmann

You can't miss them. Standing nearly five feet tall—with a wingspan rivaling the world's biggest birds—the Port Aransas whooping cranes really make an entrance. Each year, hundreds of whooping cranes settle near Port Aransas on Texas's Mustang Island. When summer ends, they set their sights southward towards the Gulf and embark on a migration thousands of miles southward from Canada. Through mid-April, birders can glimpse the majestic birds in the wild at the Aransas National Wildlife Refuge and the Texas Coastal Bend.

Whooping cranes, known by the scientific name Grus americana, are some of the tallest avians in the world. They have an average lifespan of 22-24 years with bodies averaging 4.9 feet and wingspans of 7.5 feet. According to National Geographic, "These majestic white birds are the tallest in North America. They live in family groups and frequent marshes, shallow lakes, and lagoons. Cranes feed by foraging with their bills and gobbling up plants, shellfish, insects, fish, and frogs."

They are also an endangered species. Audubon explains, "As recently as 1912, about 90 birds wintered at various points in coastal Texas and Louisiana, and there was a nonmigratory population in southwestern Louisiana as well. By 1941 the Texas wintering flock was down to only 15 birds (another six were still resident in Louisiana, but that flock soon dwindled away)" due to habitat loss, ecological events, and predation. In the following years, the flock's numbers gradually rose thanks to management, captive breeding, and reintroduction efforts, but they remain a species with precarious numbers in danger of extinction.

In recent years, as reported by the U.S. Fish and Wildlife Service, "biologists have completed analysis of aerial surveys of the Aransas-Wood Buffalo whooping crane population during January 2022 through February 2022. The survey indicated 543 whooping cranes, including 31 juveniles and 196 adult pairs, in the primary survey area (approximately 160,125 acres) centered on Aransas National Wildlife Refuge near Austwell, Texas. This marks the fifth year in a row that the population has topped the 500 mark." It's encouraging news for those studying the population of whooping cranes wintering amid Texas's Gulf breezes and protected habitats.

Port Aransas is home to several locations along the Great Texas Coastal Birding Trail, which invites visitors to explore the area's coastal communities and wetlands, and possibly glimpse their populations of migratory birds. To learn more about the annual Whooping Crane Festival in Port Aransas, visit their site. More information is also available from the Port Aransas/Mustang Island Tourism Bureau & Chamber of Commerce.

Have you ever visited Texas's Gulf coast? What's your next wish-list destination? 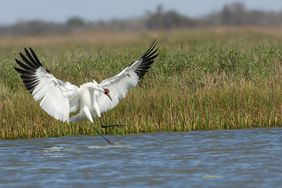 Attention, Birders: The Whooping Crane Festival in Port Aransas, Texas, Is Next Month 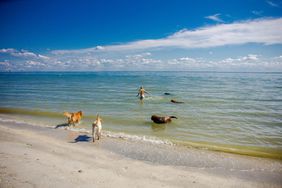 Dog-Friendly Beaches for Sandy Paws in the South