Nestled deep within the very heart of Hill Country, Texas, is the tiny town of Luckenbach. There are just 13 residents living inside the town's borders. But, don't let the population size fool you. The unincorporated community that sits about 60 miles north of San Antonio has a lot more going on than you'd expect. Here are three things you need to know about Luckenbach, Texas, before heading over for a visit.

It was founded by German farmers

According to the Texas State Historical Association, the small community was founded in the 1840s by German farmers. Those farming families included both the Engel and Luckenbach families. At the time, the town was known as South Grape Creek.

According to the town's website, Luckenbach and his family may have been early settlers, however, they are not credited with founding the town. Instead, that is typically credited to the Engels. However, the two families were ridiculously intertwined. As the site noted, "When August Engel Jr. applied for a post office, his sister, Minna Engel, agreed to work as his clerk. While they were filling out the postal application, Minna selected the name of her fiancé, Carl Albert Luckenbach, who was the son of Jacob."

After settling into the town, the Luckenbach family made sure it felt like home. They quickly opened a general store as well as a saloon, followed by a dance hall located in the center of town. Though the general store has turned into a gift shop, the saloon and the dance hall remain popular places to visit, dance, and drink, for both locals and tourists alike.

It's a country music mecca

In the 1970s, the entire town went up for sale. But, rather than see it sold off to some outsider, a local legend by the name of John "Hondo" Crouch, along with a few partners, plunked down the cash to buy it. And all he wanted to do was make it a place where country music and a little bit of magic could happen. And boy were his dreams fulfilled.

Willie Nelson, Lyle Lovett, and Waylon Jennings have all performed in the town. Now, Luckenbach's tiny dance hall often hosts popular live music events and festivals throughout the year. And truly, it's a welcoming place for visitors to roam in and spend some time. As the town's motto states, "Everybody's Somebody in Luckenbach." 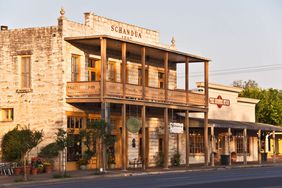 7 Things To Do During Your Visit to Fredericksburg, Texas