With state park attendance having skyrocketed across the South in recent years, there's no better time to hit the road and enjoy the natural wonders of Texas. Together, Texas' state parks tell a story of the whole state and its historic terrains, from the Hill Country rivers to the West Texas deserts to the East Texas bayous. These lands have been inhabited for over 10,000 years, and many of the state-protected parks still look just as they did long ago.

Put on your old Willie Nelson album, and grab plenty of snacks from Buc-ees. Here are the best state parks in Texas to add to your travel list.

West Texas isn't known for being busy or close to, well, anything—but Big Bend State Park and its surrounding majestic desert scenery makes it more than worth a visit. With over 800,000 acres, it's the eighth-largest national park in the continental U.S., despite seeing less than half a million annual visitors, which makes it one of the most sparsely touristed parks in the system. A must-do on any West Texas checklist is a float trip on the Rio Grande, so book a trip with Big Bend Boating and Hiking.

Short, sweet, and steep are the best descriptors of the flagship trail at Enchanted Rock State Natural Area. Characterized (and named for) a massive pink granite dome—the same unique Texas pink granite that was used to build the State Capitol building—this park is a popular outing for those visiting or residing around Central Texas. From the top of the steep Summit Trail, you'll see unparalleled 360-degree views of untouched terrain. For more entertainment, Fredericksburg, a charming German-Texan small town, is only 20-minutes' drive away.

Tucked away in a quiet nook of Texas Hill Country, this scenic park offers many attractions, including not-too-challenging overlook hikes (we recommend its Old Baldy Trail), clear aqua-blue waters courtesy the Frio River, and comfortable camping cabins available for booking ahead. The best time of year to visit is undoubtedly early spring or late fall, with autumn being privy to bright shades of orange and yellow that coat the park's signature cypress trees—while still being mild enough weather for camping and swimming.

Tubing down Guadalupe River is about as Texan as it gets, and this state park welcomes you with four miles of river frontage. Just one hour from San Antonio and two hours from Austin, Guadalupe River State Park is also one of the more popular camping destinations in the state, particularly during the summertime when swimming in its cool waters is extra appealing for families and kids. When you're not tubing, paddling, or taking a dip, embark on its hiking and biking trails.

This off-the-beaten-path park is known primarily for the show its leaves put on during the autumn season. The Uvalde bigtooth maple trees are found only in this area of Texas and are remnants of the Ice Age. The leaves turn bright red and orange later in the fall, and the primary trail loop leads up 2,200 feet to an unobstructed view of the whole surrounding rural lands, overlooking the Sabinal River. Visit nearby town Utopia for snacks and cell service, which isn't found easily in the area.

Could anyone have imagined rolling sandhills in the state of Texas? Perhaps not, but it's certainly not a mirage. Located in West Texas near the New Mexico border, the Monahans Sandhills State Park features an ocean of sand—a Texas-sized sandbox, if you will—that makes great fun for renting sand disks and surfing the dunes. The unique desert environment is one of few in the country, and the park is even friendly for horseback riders to traverse its 800-acre equestrian area.

Find this state park near Amarillo in the Texas Panhandle. Palo Duro Canyon is also known as the "Grand Canyon of Texas," and photographers come from far and wide to capture the blending colors of the canyon walls. In addition to over 30 miles of trails for hiking, mountain biking, and horse-riding, the park hosts the TEXAS Outdoor Musical in its amphitheater throughout the summer, with musical performances highlighting the struggles and triumphs of Texas pioneers.

You'll feel more like you're in the water-centered parks of Florida, South Carolina, and Louisiana when visiting Caddo Lake State Park. The East Texas park differs in terrain from its counterparts, featuring bald cypress trees draped with Spanish moss that tower over a maze of bayous, sloughs, and ponds. You're able to paddle these waterways, try your luck fishing, and even book a historic cabin within the park for your trip. Locals and park rangers make sure to recommend looking out for alligators who call the park home!

You might recognize this one from an old Willie Nelson song; the Texan bard sang rather romantically of the Pedernales River. One of the most striking parks on the list, Pedernales Falls State Park is home to a system of massive cascading slabs on limestone. More often than not, you're able to traverse the prehistoric-appearing limestone on foot in some areas while being steps from the water that flows down it. Since the expansive park is just 30 miles west of Austin, visitors are able to come over for an afternoon or load up gear for an overnight adventure. 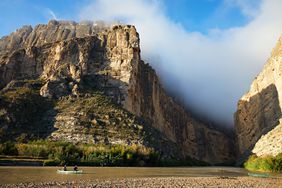 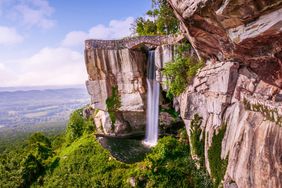 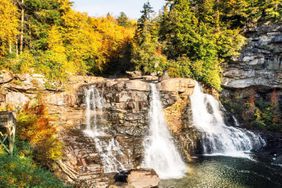