“Dennis” is currently on display in San Antonio.

Laura Young was at a Goodwill in Austin, Texas, in 2018 when she found a bust under a table with a yellow price tag affixed haphazardly to its right cheek.

"Clearly antique—clearly old," Young, who runs her own business as an antiques dealer, recalled to KUT.

An employee helped Young carry the 50-pound marble sculpture to her car. She buckled it into the passenger seat and took the bust home. It would be one of the easiest journeys it had ever taken.

Young told The New York Times that she immediately did a Google image search for "Roman bust" and realized, "They look a lot like my guy."

So, she reached out to some auction houses in London. Sotheby's confirmed that the sculpture was even older than she suspected, dating it back to the late 1st century B.C. or early 1st century A.D. Bonhams later identified it as a portrait bust of a Roman general that was part of the art collection of Ludwig I, a Bavarian king. The bust had been displayed in his replica of a Roman villa until it was destroyed during World War II. 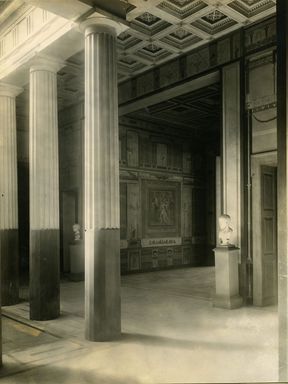 The portrait displayed in the courtyard of the Pompejanum, Aschaffenbu rg, 1931. 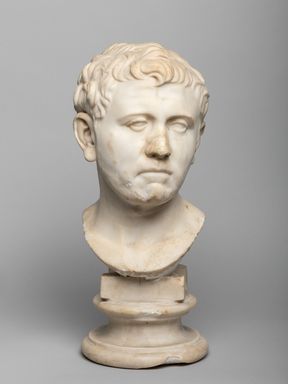 Young was in possession of a looted piece of 2,000-year-old art. She could neither keep it nor sell it.

"At that point, I realized I was probably going to need some help," Young told KUT.

She got in contact with a lawyer who specializes in international art law, and the complicated negotiations began. In the meantime, the bust sat on a small credenza near the entryway in Young's house. She nicknamed him Dennis.

Eventually, all parties reached a deal. The Germans would take Dennis back, but first he would be displayed at San Antonio Museum of Art for about a year.

Even with his future settled, the mysteries surrounding Dennis' past remain. Experts believe he could be one of two people, either a son of Pompey the Great or Nero Claudius Drusus Germanicus. And as for how he ended up at a Goodwill in Austin? We might never know. But because the bust turned up in Texas, it seems likely that it was either stolen or traded for by an American WWII service member and brought back the states in a duffle bag.

"There are plenty of Roman portrait sculptures in the world. There's a lot of them around. They're generally not in Goodwills," Stephennie Mulder, an art history professor at UT Austin, said to KUT. "So, the object itself is not terribly unusual, but the presence of it here is what makes it extraordinary."

As for Young? She told KUT that she was sad to see Dennis go, but she's happy that he's finally headed home.

"It hurt a little bit. It was bittersweet. Like, it's nice that there's a resolution to it and that it's working out for the best," she said. "It'll be a little bittersweet to see him in the museum, but he needs to go home. He wasn't supposed to be here."

Portrait of a man is currently on display at the San Antonio Museum of Art. It will remain there until its return to Germany in 2023.