Plan a road trip to this charming city, just south of Nashville.

It's like clockwork. As soon as summer's heat is ushered out by a breath of fresh fall air, Southerners start thinking about road trips. Whether you're dreaming of a quiet cabin in the woods, antiquing in a quaint town, leaf-peeping on a hike, or finding fresh apple cider doughnuts at a farm stand, it doesn't get much better than a weekend trip to Franklin in Middle Tennessee.

Franklin might be small compared to Nashville, its neighbor to the north, but it has developed a big reputation over the years. Various media outlets (including this one) have proclaimed the city the "prettiest," "most charming," "friendliest," and "most romantic" as well as a "Southern dream town" and the "nicest place in the South." That is quite a lot of hype for any location to live up to, but year after year, Franklin continues to attract visitors and new residents. According to the U.S. Census Bureau, it was one of the 15 fastest-growing cities in America from 2010 to 2019.

Take a stroll around the vibrant 16-block historic downtown district, and you'll find it hard not to be charmed. Main Street is lined with handsomely restored buildings, many from the Victorian era, that house an impressive array of small businesses, both old-fashioned and decidedly modern. Beginning in the early 1980s, the city and local preservation organizations like the Downtown Franklin Association took on the task of restoring many of these formerly run-down gems—like The Franklin Theatre, an Art Deco building from 1937 where people now watch movies and hear live music.

When you enter a space with creaky wood floors in Franklin, chances are that they're original. The local outpost of White's Mercantile, a shopper's paradise owned by singer-songwriter Holly Williams, fills the ground floor of a circa-1900 building with clothing, home goods, and gifts (like hand-beaded coin purses saying "Howdy"). Just off Main Street is Biscuit Love, a busy cafe that occupies the Corn House, a Queen Anne-style home built in 1892. There, you can order an oat milk latte with your Southern Benny (a buttermilk biscuit topped with shaved country ham, eggs, and sausage gravy). Browse the old and new titles at Landmark Booksellers, which occupies one of the earliest Greek Revival-style structures in Middle Tennessee, dating all the way back to 1808.

History has been preserved here in more weighty and significant ways as well. As you explore the city center, you're never far from a landmark or sign pointing out its role in the Civil War, particularly the Battle of Franklin, one of the last major conflicts. At the center of the town square, a monument to Confederate soldiers who died in the battle has stood since 1899. In recent years, residents have pushed for a more inclusive display, and in 2017, local pastors and community leaders created the Fuller Story project, an effort to educate the public about the African American experience before, during, and after the war. Two years later, five new markers were added in and around the square. Then last October, a bronze statue of a United States Colored Troops soldier was erected.

There is only one hotel in downtown Franklin, but it's a good one and is located about a block away from the square. Since opening in late 2019, The Harpeth, an elegant 119-room stay named after the river that runs through the area, has become the prime spot for out-of-towners and a place where locals gather to dine and drink. You can try a new whiskey—the bar offers over 35 different types—fireside in the lobby or alfresco in the beautiful courtyard. Or sit down at the swanky in-house restaurant and bar, 1799 Kitchen and Cocktails, for a hearty brunch (try the Beef Cheek Hash) or dinner (try the Cornish hen or elk chop). 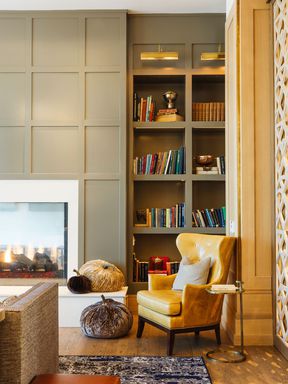 Cozy up at The Harpeth hotel. 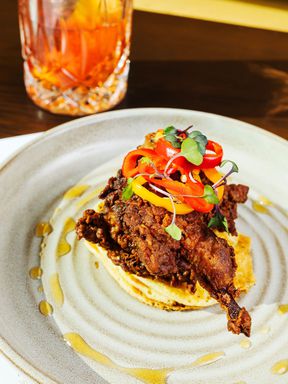 Local lodging options will grow in early 2023, when Southall, a 325-acre luxury resort, opens. A short drive from downtown Franklin, the sprawling property will have a working farm, trails, and fishing spots as well as perks for the not-so outdoorsy—such as poolside cocktails, a spa, and cooking classes. Much of the produce grown on-site will be used at the resort's two restaurants and sold at its Farm Stand, which will stock prepared foods, picnic baskets, and more.

To surround yourself with fall foliage, plan to visit one of Franklin's many hiking paths. Locals like Timberland Park, just southwest of the State 96 entrance to the Natchez Trace Parkway. Choose from nine trails of varying difficulty, and borrow a walking stick (made from a reclaimed branch found on the property) as you set out. For dramatic vistas, head to Preservation Park, hike the Battlefield Trail, and enjoy the elevated view of the park's 200 acres of wooded hills and former pastureland.

If you prefer to appreciate nature from your car window, the Natchez Trace Parkway is one of the most beautiful drives in the South, with plenty of fall color and the stunning Double Arch Bridge. A masterpiece of engineering, the concrete structure can be experienced from the top by car or bike or viewed from below at Birdsong Hollow, a grassy area ideal for a picnic. Whichever you choose, it's worth visiting for the photo opportunities alone.

But don't limit yourself to just the Franklin area. One of the best things about this city is that there are neighboring towns with character that far exceeds their small size: Leipers Fork, a tiny village brimming with personality (and some seriously good bourbon), and Arrington, a bucolic spot for wine, antiques, and family farms. Both of these destinations are located just a few miles away from Franklin, making it a good home base for a weekend trip.

Make a Stop in Leipers Fork

There are small towns, and then there is Leipers Fork. Depending on how fast you drive along the winding two-lane road, it would be conceivable to get distracted by the scenery and miss it on the way to Franklin or Nashville. Don't make that mistake—it would be a shame to bypass this gem of a place, especially in the fall. The main street, Old Hillsboro Road, is about a mile long with no traffic lights and serves as the location for a dozen or so small businesses, including stylish boutiques, galleries, and restaurants.

Serenite Maison, a home-goods shop in a former general store dating back to 1914, would feel right at home in Paris with its glittering chandeliers, antique furniture, handmade jewelry, and aroma of tobacco-scented candles. Props Antiques is filled to the ceiling with fascinating finds plus retro toys and gifts. Tucked away just off the main road in a tiny building resembling a hobbit's house is Tennessee Turquoise Company, which features an exquisite collection of vintage jewelry made with the bright blue gemstones. The store is owned by Morgane Stapleton, wife of country musician Chris Stapleton, and each purchase helps support the National Indigenous Women's Resource Center.

The fine art scene is so robust here that you can spend an afternoon exploring. The Copper Fox Gallery is a beautifully restored 1888 house filled with a thoughtfully curated collection of art (created in all media, from sculptures to felted animals) by Tennessee makers. Next door is the charming tin-roofed gallery of David Arms, an event designer turned artist best known for his lifelike paintings of birds. Just a short walk from there, Leiper's Creek Gallery has artists from around the country in a sophisticated yet relaxed space that shows no traces of its former life as a gas station.

Restaurant options are limited but surprisingly varied in Leipers Fork. The Country Boy, the oldest diner in the county, serves up hearty breakfast plates and Southern fare like fried chicken and catfish. Across the street is Fox & Locke (formerly called Puckett's), which rebranded this year, keeping the same live music and updating the menu to include meat 'n' three options, burgers, sandwiches, and ice cream. For a fancier meal, 1892 offers an elegant farmhouse setting and artfully constructed, seasonally changing dishes like pork shank with sweet potatoes topped with a rosemary marshmallow.

Wines in the Fork is a shop and tasting room specializing in local vino, that you can enjoy overlooking the Harpeth River. A quick drive away is Leiper's Fork Distillery, which produces small-batch bourbon and whiskey from grains grown nearby. The tastings (which take place in a snug, carefully restored cabin from the 1820s) feel like stepping back in time.

Consider booking a stay in the village at White's Room and Board, a revamped 1892 cottage complete with a front porch swing and Gibson guitars in the event that musical inspiration strikes. For larger groups, Pot N' Kettle Cottages offers five rental properties, including the brightly decorated Leiper's Fork Inn, which has four bedrooms and can sleep up to 11 people.

Soak up the Scenery in Arrington

Known for its rolling hills and countryside, Arrington is about 20 minutes from Franklin—though the drive is so spectacular you might wish it took longer. Family farms and produce stands abound here, and many are overflowing with pumpkins and gourds. At this time of year, Delvin Farms is piled high with them as well as colorful potted mums. Check out their store that stocks fruits, veggies, and locally made products like preserves, candy, and even kombucha. Fast's Greenery is also worth a stop, especially for plants and outdoor decorations. For fresh-picked apples and cider, head to Morning Glory Orchard, a second-generation farm in nearby Nolensville. (Pro tip: Cider doughnuts are sold only on Saturdays. Get there early.)

In an area where whiskey is king, it might surprise you that the main attraction in Arrington is wine—and that it's locally produced. Co-owned by country musician Kix Brooks (of Brooks & Dunn), Arrington Vineyards has 16 acres of grapes, which are used (along with fruit from other growers) to make red, white, and sparkling wines. Various tasting options are available. One of the best choices is to purchase a flight of four types of wine and then enjoy it outside on the lush, green property, which is a perfect spot for picnicking. You can bring your own food, or stop by the winery's weekend snack bar that's open through November. Depending on the date, you'll often find food trucks and live music on-site.

For a bit of shopping, try Mercantile 1858 (the store has a second location in Franklin) for old and new furniture and decorative pieces for every room of the house. Over at Backroads Revival, you'll discover an unexpected mix of vintage industrial furniture (like apothecary cabinets) sourced from historic buildings and factories throughout the East Coast. The small store and barn, which is open only on weekends or by appointment, is also filled with local art, including striking landscape and nature photographs by the shop's co-owner Cherie Carter. 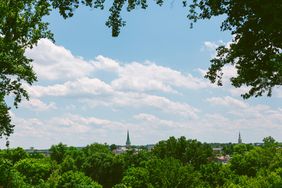