Nothing has changed about these burgers in 100 years. Not even the grease.

The year was 1912. Americans elected Woodrow Wilson as U.S. President, Arizona became the 48th state and the Titanic sank into the Atlantic Ocean. That same year, in Memphis, Tennessee, another piece of history was unfolding. Elmer "Doc" Dyer opened the doors to his new café aptly named Dyer's Burgers. But these were not your average hamburgers. Dyer's burgers were made from specially seasoned ground beef that created extra grease when cooked. Then one night, there was a mistake in the kitchen. "One of the cooks didn't change the grease in the pan one night and he ended up cooking burgers in it," current owner of Dyer's Burgers, Kendall Robertson, told Southern Living. "The next day somebody came in and ate a burger and was like, 'That's the best burger I've ever had in my life!'" Fast forward to 2022 and believe it or not, Dyer's Burgers not only still exists, but the burgers are still cooked in the original grease that made the restaurant famous more than 100 years ago.

But if the idea of eating century-old grease doesn't sit well with you, Robertson assured us that it's perfectly safe. "We strain it through to get any particles out of it and then we season it," he explained. "It's the same molecules from 1912, it's never been changed." Something else that hasn't changed is the way the burgers are served. "We only do mustard, pickle, onion and pepper. We don't even carry lettuce, tomato, or any of that, that's the way they come," stated Robertson. And don't ask him what the special seasoning is made of. "I can't tell you!" he said. "That's part of the secret!"

The burgers start out as three-ounce balls of meat. They're pounded down with a wooden mallet into paper thin patties before being dropped into the legendary grease. The burgers are cooked in huge custom-made cast iron skillets. "They're about four inches deep and they're probably three feet wide," said Robertson. Each skillet can hold up to 75 burgers at a time. It's a good thing too, since Robertson said Dyer's goes through 750 to 1000 pounds of ground beef each week. "When it cooks it gets a little bit smaller, so most people get doubles. But we have a triple also, because a single doesn't really fill you up."

Some patrons special order their burger, taking full advantage of the world-famous grease. "It's called 'double dipping it'," described Robertson. "We'll take the whole burger, with the bun and everything, and dip it in the grease, then wrap it up and give it to them. That's how they want it." And in case you're worried Dyer's will run out of grease before you make it there, Robertson said they've got back up. "We keep five-gallon pickle buckets, and I think right now I have 10."

In addition to the famous burgers, Dyer's serves up deep fried bologna, hand cut fries, and a sandwich called the "Filthy Diablo". "It's got three meats and three cheeses on it. And then it's got polish sausages on it," said Robertson. "It all comes on a bun just like the burger does." The grease-laden menu plays into the restaurant's slogan, 'Have you had your vitamin G today?' That's "G" for grease, of course.

Three of Dyer's employees have worked there since the restaurant moved to Beale Street in 1999. Linda Burks is one of them. When asked what she loves most about working there, she said it's the family-oriented atmosphere and the many celebrities that have come through the door. Robertson said that list includes famous faces such as Tom Hanks, Michael Jordan and Mike Tyson. "It's a great experience," said Burks. "I get to meet a lot of people." Burks said she's collected pictures over the years that she now keeps in a shadowbox.

WATCH: Chef David Rose Wants You to Only Flip that Burger One Time

If you can't make it to Memphis, there's still hope you could one day feast on Dyer's famous burgers. "I do plan on hopefully growing it, and I would eventually like to have it all around the south," Robertson said. "But we haven't gotten there yet." 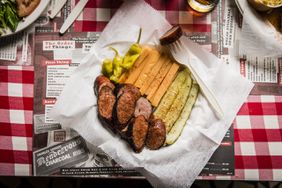