With unspoiled beaches washed by the Atlantic, these solitary Sea Islands will take your breath away.

It's a bit like a fragile family heirloom passed down with care and love. What better way to describe South Carolina's remarkable St. Phillips Island? Jigsaw-puzzled among its marshy sea-isle sisters southeast of Beaufort and just northeast of Hilton Head, St. Phillips lay largely undisturbed—other than by temporary Native American habitation, colonial oversight by the Spanish, and well-heeled sportsmen who came here for pig hunts—until famed media mogul Ted Turner bought the island for $2.4 million in 1979.

St. Phillips encompasses nearly 4,682 acres of ancient landscape, all of it accessible only by boat, featuring narrow ridges of upland dunes flanking freshwater sloughs, with live oaks and magnolias on the high ground, palmettos and marsh grasses on the low. Here was a strand of pale and shifting sands cradling the boneyard remnants of trees, a salty Eden where dolphins leaped and vivid painted buntings perched on low branches while eagles and ospreys gazed from the treetops. 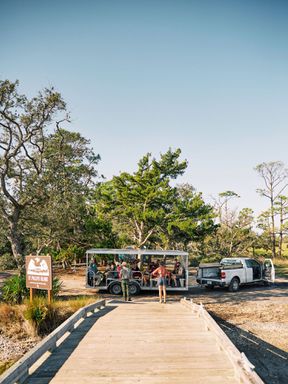 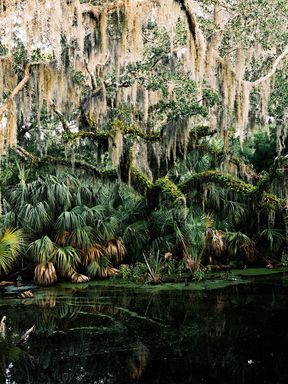 Turner, an avid conservationist, took hold gently, carving a sandy 3.7-mile track from the island's back side on the Story River to an open berm facing the Atlantic, where he built a low-key five-bedroom home with a screened porch that's long enough to hold a row of rocking chairs and a Pawleys Island Hammock. Eventually, he would see St. Phillips named one of only six National Natural Landmarks in South Carolina, protected by a conservation easement with The Nature Conservancy.

When the Turner family looked to find a buyer for the island after nearly 40 years of ownership, a deal was struck with the state of South Carolina. Hunting Island State Park is now managing St. Phillips and will book five-night minimum stays at The Turner House. Private-island buyouts (meaning no tours will arrive during your visit) are offered as well.

Paul McCormack took over directing the state park system just months after the purchase of St. Phillips and has come here dozens of times since then. As cool as The Turner House is, McCormack says, "It's the island that's the experience."

What dinners they must have had. Imagine writers, scientists, and artists from around the world spending days in splendid isolation pursuing private projects, inquiries, and dreams. They stayed in a mansion of sun-bleached pink stucco, making the sole footsteps along miles of tawny beaches or through dense maritime forests, breathing in the musky velvet air of marshes and the salty breeze of the Atlantic, overhearing the grunts of feral donkeys and the trill of birdsong.

Here on Ossabaw Island, these lucky visionaries visited, for weeks sometimes, as guests of a one-of-a-kind hostess, Eleanor "Sandy" Torrey West and her husband, Cliff. The only payment was to join the couple every evening for dinner and share conversation.

Due south of Savannah and tucked among Georgia's 14 barrier islands was one heiress's vision of a wild cultural utopia: Ossabaw Island. "This place was to be their inspiration," says Elizabeth DuBose, executive director of the Ossabaw Island Foundation, a nonprofit that now acts as a steward to ensure that West's fierce protection of this locale and her endless curiosity will endure.

DuBose explains that inspiration runs deep on Ossabaw. The heart-shaped Sea Island, 10 miles long and 7 miles wide, is accessible only by boat (a 20-minute ride from nearby Tybee Island). Its history reads like an epic poem: habitation by Native American peoples 4,000 years ago; Guale Indians encountering Spanish explorers in the 16th century; the British then replacing the Spanish; settlers forcing enslaved people to the island for labor in timber cutting, farming, and the creation of four cotton plantations in the 1800s; liberation after the Civil War for a small group of freedmen and families; and then a hunting retreat for wealthy businessmen. Finally, it was purchased in 1924 by West's parents—surgeon Henry Norton Torrey and his wife, Nell Ford Torrey, an heiress to a plate glass fortune. 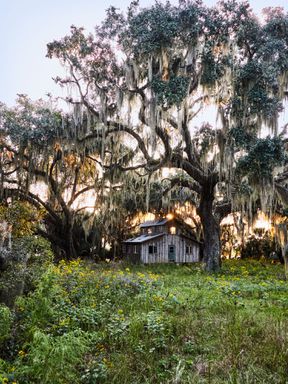 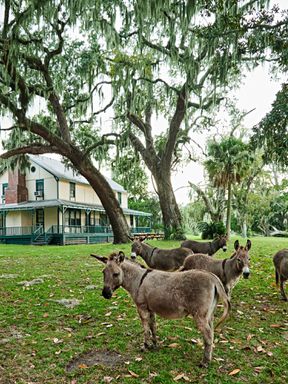 The Torreys, who lived in Michigan, spent their winters on Ossabaw and built an opulent estate—like the American aristocrats who surrounded them, including the Carnegies on Cumberland Island and the Reynolds family on Sapelo Island. It was here that West unlaced her bows and learned to run free; explore the crumbling tabby slave quarters at the far end of the island; climb live oaks; and spy on egrets, herons, and plovers, who seemed amenable to sharing their environs with her.

This is a breathless tale touched by occupation, war, wealth, and aspiration, but that's part of what makes Ossabaw so rich and even a bit mysterious, DuBose says. Unfortunately, West's funding for what grew to four philanthropic initiatives that ran from 1961 until 1983 diminished. In 1978, she sold Ossabaw to Georgia, and it became the state's first heritage preserve, to be used only for natural, scientific, and cultural purposes.

"We are not looking to duplicate everything that Mrs. West did," DuBose admits, "but we're in the spirit of her organizations." What this means now, she says, is carefully controlled access to Ossabaw. That said, there are tours and special events—pig roasts and a New Year's Eve celebration, for example—that the public can experience. The Ossabaw Island Writers' Retreat runs programs several times a year. It's a thoughtful next chapter in this island's epic story. And with a pig roast on the calendar, perhaps there's room for bracing Ossabaw-only dinner conversations still.

The irony of Little Talbot Island is the secret to its marvels: What made it virtually uninhabitable for thousands of years—exposure to the high energy of the Atlantic Ocean and sandy soil not friendly to planting—now makes it a treasured place for humankind to briefly, respectfully, and joyfully occupy. Here, you can camp amid the shady, primeval tangle of its hammock forest and feel like you have this incredible place all to yourself.

Allison Conboy, park services specialist for the Florida Department of Environmental Protection, says, "It's still wild and beautiful, but it belongs to the people."

Conboy is a deep admirer of the sea-isle sibling to Big Talbot Island just south of Amelia Island and northeast of Jacksonville. "The fact that it's a preserved barrier island without any development is pretty spectacular," she says. 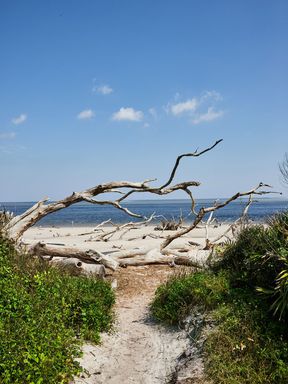 Protected as a Florida State Park since 1951, Little Talbot invites you to paddle and fish its waterways and explore its solitary white sand beaches. 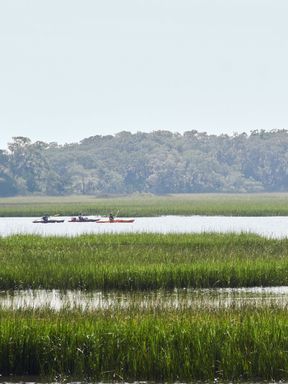 Indeed it is. The native Timucua people opted for more-inland dwellings 10,000 years ago, settling the larger and more protected land on Big Talbot and Fort George Islands. Much later, colonial-era planters also eschewed Little Talbot, leaving it to grow whatever it wanted: loblolly pine, magnolia, live oak, cedar, palmetto, bay, and holly trees; sea oats; railroad vine; and even cacti. Everywhere, nature took hold and then beckoned—not to people, but to birds.

What a haven emerged for avian life that either calls the island home year-round or migrates to it for rest or nesting, says Conboy.

While piping plovers—the ultimate snowbirds—settle in on the island's inviting north end for the winter, new arrivals come in the spring. Beginning in March, she says, the solitary nesters (Wilson's plovers and oystercatchers) pair up and pick a spot along Little Talbot's fine white sands to build their scrapes and raise their families. By mid-May the migrating seabirds arrive, she says. The critical habitats are closed during nesting season because birds matter so much here.

Still, humans get their fair share. Little Talbot's campground of just 36 sites is tucked away amid dunes and maritime hammock. For the lucky few who know to reserve early, this is perhaps the ultimate place to lay one's head along Florida's Atlantic seaboard.

Amelia Island, FL
It's easy to forget there's a real world at this family-friendly treasure on Florida's northeast coast, where both the Omni and Ritz-Carlton have established resort beachheads. Whether you're aiming to paddleboard, saddle up, tee off, or just chill out, you won't have trouble finding a great place here.

Hilton Head Island, SC
Every golfer in the South has either been to Hilton Head or placed it on the proverbial bucket list. No disrespect to its pristine greens, but the beaches here consistently rank as favorites among readers.

Kiawah Island, SC
This dreamy destination is just a hop away from Charleston. While Kiawah has luxe accommodations at The Sanctuary, it also features public Kiawah Beachwalker Park on its west end—an affordable vantage point for taking in the priceless sunsets.

Little Tybee Island, GA
Part of a state heritage preserve, this retreat lies just over Tybee Creek from Tybee Island. It's actually much bigger than its sister island—and it's definitely much wilder. Salt marshes and tidal creeks make it a paddler's dream—you'll need a boat to get here.

Sea Island, GA
Best known for The Cloister, one of the South's most venerable stays, this isle has lots to explore. The hotel is part of Sea Island resort, which also features two lodges, an inn, and cottages for rent, all in beautiful coastal Georgia.

Wassaw Island, GA
The 10,053-acre barrier island located near Savannah became a National Wildlife Refuge in 1969. You can reach this isolated escape only by boat. It's absolutely teeming with wildlife, making it perfect for hikers, bird-watchers, and kayakers.