Bass Pro Shops founder Johnny Morris dreamed, designed, and built Missouri's Big Cedar Lodge so you could escape to his slice of heaven on earth.

Johnny Morris is the man when it comes to the great outdoors, and as unofficial tackle box king, he was pretty much the perfect person to start a lodge property on a nearly 60,000-acre lake just outside Branson, Missouri. Since it opened in 1988, Big Cedar Lodge has been Johnny's hometown hide out on Table Rock Lake, barely 30 minutes from where he started his first bait shop 37 years ago in the back of his dad's liquor store. The Bass Pro spirit and Johnny's gentle call of the wild fill all 81 cabins, 3 lodges, 4 restaurants, and 100 boat slips. Here, the local boy-done-good shares his Big Cedar favorites.

Johnny originally wanted a place for customers to test fishing boats but ended up building an Ozarks lodge on par with any lake resort in the country. "Jeanie [his wife] originally found the ad for the property in the Springfield News-Leader classifieds," Johnny says. "What we discovered looked like a run-down roadside motel." Now guests choose between cottages, cabins, and handsome hotel rooms in one of three ridge-side lodges.

2: His high school buddy lit up the lobby

3: One of the boats is named after Waylon Jennings's wife

A ride on Goin' Jessi, Big Cedar's replica 1939 Chris-Craft cruiser, is the perfect end to the day. "I bought it on a whim in upstate New York," Johnny says. "We named it after Waylon's wife because the Jenningses always stayed with us when he played Branson."

Twenty-three years ago, before a single guest stayed the night, Johnny and his shop-owner father (and hero), John A. Morris, broke in the grounds with sunset cookouts. And they weren't alone. "I remember two big old dogs always hung around what's now the Truman Smokehouse," he says. Today, guests enjoy lattes and bagels on the same patio.

5: The furniture is driftwood

6: You can build a fire in July
Crank up the AC so you can start a wood fire in the cabins. Johnny says so.

7: The Missouri mountain trout is the best thing on the menu

Johnny recommends chef Andy Hampshire's Ozark Trout at the Worman House--once a retreat for Frisco Railroad executive Harry Worman. The trout are farmed at the Rockbridge freshwater hatchery 100 miles east. On the opposite hill, find huntsman grandeur at the Buzzard Bar, which has a mahogany bar top that's twice as old as man-made Table Rock. Local musicians play nightly.

8: The best fishing is early in the shallow gravel beds
I remember when the first water came over Table Rock Dam and filled the lake," Johnny says. "I was 10." Thousands of fishing hours later, he is full of secrets ("Fish early and hit the shallow gravel beds for smallmouth.") and determined to give back: Bass Pro Shops has put $2.5 million into the National Fish and Wildlife Foundation's More Fish campaign for lake conservation.

9: The Adirondacks inspired the design

10: The main road is Johnny's decompression chamber
For Johnny, Big Cedar's half-mile-long entry drive meanders from ridgetop to shoreline like a man walking in the woods, giving a mysterious sense of arrival for 600,000 guests every year. "The road is an escape," Johnny says. "It's my decompression chamber." He's currently building a second road, this one four times as long and leading cars through a limestone cave.

The Best of Big Cedar Lodge

Best Room: For families, Knotty Pine one-room cottages with a second-bed loft, $91-$411. For couples, try the super-spacious cabins, $171-$398. (Rates are low season to high season.)
Best Economy Tips: Ski boats rent for $75 an hour, but canoes are free. Also, the dive-in movies for kids at the Swimming Hole (held four or five nights a week) are free.
Best Way To Get There: In May, the $140-million Branson Airport opened 10 miles from Big Cedar Lodge. From Atlanta and Dallas, Airtran flies for $89 one-way. 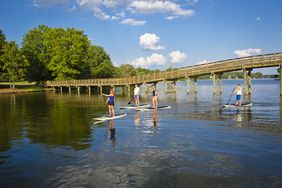 Your Ultimate Guide to Greensboro, Georgia 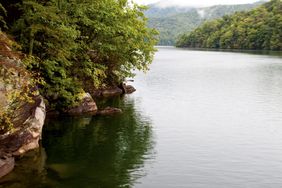