Nothing beckons like the open road. So we've mapped out a South-wide road trip, armed with a bucket list of essential experiences. Strap in and join us as we go from the Lowcountry to the Upcountry in the first of this six-part series.

As much as the cross-country road trip has become an American rite of passage, we think it's high time it got a Southern twist. So we set out to chart an iconic path across the region. Knowing full well that any attempt to lay down a definitive route would, by necessity, leave off more spots than it could include, we opted instead for an experiential approach. We'd dip our toes in a Smoky Mountain stream and a Hill Country swimming hole. We'd visit a literary landmark, hit up juke joints, and gobble boiled peanuts out of a paper sack. We'd follow a gravel road—and a stranger's advice. Where each of those, and others, would happen would be less important than that they would. So join us for the next six issues on our trip from Charleston to Austin. Then gas up your tank and blaze your own trail. And don't forget to send us a postcard from the road!

We couldn't have asked for a more poetic start for our journey than the sign on Highway 171 welcoming us to "the Edge of America," the tagline adopted by the laid-back community of Folly Beach on a 7-mile barrier island south of Charleston. And as we drive deeper into the coastal landscape—bright green swaths of marsh it'd be easy to mistake for fields—the moniker doesn't feel like much of an exaggeration. It's even more apt once Tim, my Texas-born, Virginia-raised driving buddy (and beau), and I are standing on the wide, windy beach at The Washout, a popular surf spot that gets its gusts (and gusto) from the steamroller effects of Hurricane Hugo, which leveled the chunk of homes behind it in 1989. We wanted the Atlantic, and we got it in all its implacable glory. We consider renting a surfboard at family-owned McKevlin's (mckevlins.com), but fearing that a wipeout on day one might put a damper on the trip, we settle for a wade in the surf, then steer ourselves to Rita's Seaside Grille (ritasseasidegrille.com), a family-friendly hangout that serves favorites like a pimiento-bacon burger and blackened tuna nachos.

Thus fortified, we make the 20-minute trek into Charleston to drop off our bags at Zero George Street Hotel (zerogeorge.com; rooms from $359), an 18-room boutique hotel in the Ansonborough neighborhood, which is spread across five 1804 buildings stitched with moss-edged brick pathways and palmetto-shaded courtyards. It's like a microcosm of the city itself—lush, beautifully aged, and composed of disparate styles that work seamlessly together. Eager to explore the town on foot, we forgo the abundant walking-tour options, as practically every third structure has a plaque explaining its age and significance (here, a Revolutionary War hero's home; there, a cotton merchant's manse). And while the Georgian, Italianate, and Victorian edifices make us swoon, it's the fragrant clouds of star jasmine, draping doorframes like shaggy manes and climbing toward the rooftops, that stop us in our tracks time and again. Eventually, we wander into the 200-plus-year-old historic Charleston City Market (thecharlestoncitymarket.com), which reopened in 2011 after a $6 million renovation, and linger over jewelry fashioned from antique flatware and handmade sweetgrass baskets. As the sun starts to dip, we cruise past the thronged sidewalks of Upper King Street for something more off the beaten path: chef Bob Carter's Rutledge Cab Co. (rutledgecabco.com), set in a converted 1950s gas station in the residential Wagener Terrace neighborhood. The vast wraparound patio quickly fills with locals feasting on reimagined standbys (a quirky charcuterie platter with deviled ham rillettes and fried bologna) and standout sandwiches (roasted lamb with Havarti and pickled cabbage). For nightcaps, we pop in for an expertly made craft cocktail at The Gin Joint (theginjoint.com) and then make our way around the corner to the roadhouse-y The Griffon (griffoncharleston.com). Its beer selection is solid—locally brewed Holy City Pluff Mud Porter; Westbrook Gozu, a sour-salty gose beer with yuzu juice—and the decor is intentionally slapdash, with every surface plastered with dollar bills. It's the kind of place where your server might be persuaded to do a shot with you come closing time, in a dive-bar salute to Southern hospitality.

It's so hard to say goodbye to our room at Zero George—those heart-pine floors! the marble bath!—but the road calls. Our first stop is in North Charleston at Mixson Market (mixsonmarket.com), a cafe/gift shop within an eco-friendly planned community anchored by a members-only pool and racquet club. The staff sets up lounge chairs by the pool as we wait for our breakfast tacos—delicious (but messy) assemblages of Sriracha-spiked fried egg, Cotija cheese, and griddled arugula on toasted corn tortillas—and shop for snacks and souvenirs.

Afterward, we head to Greenville to check out its revitalized downtown and a food scene that's fast becoming one of the South's most vibrant. The landscape changes so gradually—the low-lying coastal plain composes nearly half of the state before creeping up to the Piedmont plateau—that we barely realize we've climbed from sea level to 1,000 feet over the three-hour drive. In town, we check in at the Park House Bed and Breakfast (parkhousebedandbreakfast.com; rooms from $169), a five-room inn in a renovated 1911 home on a leafy stretch just north of downtown. From there, we hoof it to Main Street, which gleams with new construction and spruced-up public spaces, including the 14-acre Falls Park, built around the Reedy River. Happy to be stretching our legs, we cover most of Main Street's mile-long turf, from the north end—where Joe Fenten offers daily tastings of his small-batch moonshines at Dark Corner Distillery (darkcornerdistillery.com)—all the way down to Fluor Field (milb.com), home to the Red Sox farm team the Greenville Drive. The stadium is modeled after Fenway, complete with a manual scoreboard and a scaled-down version of the Green Monster. We get tickets for the lawn, where we spread out a blanket and scarf down hot dogs and pretzels while watching costumed relay races and air-guitar competitions that are occasionally interrupted by innings of actual baseball. (The fiercest competition is among the youngsters lined up along the left-field wall, waiting for foul balls. Tim looks only a little jealous that he's too old to join in.) By the end of the game, lying on our backs on the grass watching the fireworks, we feel like we've hit a home run.

After the stadium empties, we head toward our second show of the night—dinner. We pass Mediterranean-inspired The Lazy Goat (thelazygoat.com) and Nose Dive gastropub (thenosedive.com) for Aaron Manter's The Owl (at press time, The Owl is closed, with plans to re-open in August. facebook.com/owlrestaurant), a marvel of inventive cooking (foie gras with Riesling gel, apricot conserve, and granola crumble). As the bartender mixes up a round of Sun Shines (pineapple, crème de violette, and Dark Corner moonshine), we realize why this place has become a favorite of Greenville's off-duty cooks and attitude-allergic gourmands. And because part of what makes Manter's creations so special are the raw materials, we spend the dessert course hatching a plan to get our hands on some of that farm-fresh produce the next day.

It's early morning in downtown Greenville, and an alfresco yoga session is going on in NOMA Square. Farther down Main Street, a farmers' market has unfurled (a Saturday staple all summer), but we want to get to the source. So after breakfast among the hungry masses at Tupelo Honey Cafe (tupelohoneycafe.com), we set out to survey the region's bounty. We drive north toward the mountains and hit Perdue Fruit Farm (864/979-8378) on the Cherokee Foothills Scenic Byway, where we watch as folks make preserves and linger to listen in on the crop talk and local gossip up near the counter. Then, veering east, past disintegrating farmhouses and antiques stores with names like Copper Kettle, we make our way to Fisher's Pick-Your-Own Orchard (fishersorchard.com), one of several state-certified roadside stands where you can harvest your own fruit. It's still a little early in the year for peaches, but we've been told that South Carolina's are the best, so we follow the orchard's hand-drawn, color-coded map to the 'Flavorich' and 'Sunbrite' swaths, the earliest ripening varieties on this plot. Swapping tips with a grandfather-and-grandson duo under the trees' low, heavy branches, we fill a basket with enough fruit to feed us for the rest of the trip—but don't even wait to get back in the car before biting into the first one. 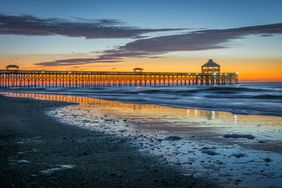