Although Nashville is known for its music, its food scene is something worth singing about. Yes, the Music City still has its fair share of hot chicken and Southern-fried spots (not to mention some killer biscuits), but the city's food scene has blossomed in recent years. Many talented chefs, both natives and transplants, continue to feed Nashville's hungry diners with exciting concepts that embrace seasonality, sustainability, and a commitment to showcasing their individual point of view. As a result, Nashville's food scene is only becoming more international and more community-focused rather than tourist-driven. Long gone are the days of fast food joints and nationwide chain restaurants. Instead you can nosh on Indian-Southern fusion from a celebrity chef or homemade pasta from James Beard nominees. To get a true taste of the city, you'd have to spend weeks or even months trying all its delicious bites. If you haven't got that much time, here are some good places to start.

The three entrepreneurs behind Slim & Husky's Pizza Beeria grew up in Nashville and are longtime friends—one slim and two husky. Some good-natured ribbing inspired the name of their business, and community influenced their vision, as the pizza joint welcomes an eclectic clientele to help revitalize its North Nashville neighborhood. Unconventionally shaped pies—oblong discs of house-made dough—get smeared generously with sauces and piled with fresh, local ingredients. Customization is encouraged, too, with a buffet-style line of toppings. While the partners have been expanding their empire, the original location—a small box of white-painted brick and ductwork with communal tables and local beers on tap—remains a favorite. As guests wait, a playlist ranging from OutKast to Salt-N-Pepa keeps heads bobbing. slimandhuskys.com

With a splash of neon to light up a formerly dull bit of East Nashville's Gallatin Avenue, Pearl Diver beckons as a place to escape. Four industry pros with lots of experience and roots in this city were inspired by ama (Japanese divers who look for pearls), and the decor takes you on a deep dive, too, with a lighting scheme and green-and-blue hues reminiscent of the fantasy film "The Shape of Water". Palm-frond wallpaper, seafoam booths, and coral stools lead the way to the bar for such drinks as a classic daiquiri with rum, pressed sugarcane, and lime. Or head to the colorfully enclosed patio with a mai tai or El Padrino, made with Blanco tequila, fresh cucumber, serrano chili, agave, fresh lime & black salt. Pair your drink of choice with a Latin-Asian fusion dishes like the Hawaiian Big Mac Burger and Hot Chicken Tacos. pearldivernashville.com

Chef Hrant Arakelian and Elizabeth Endicott, a husband-and-wife duo, paid their dues for many years by working around town as a chef and cocktail creator. In 2018, the couple opened a space of their own, an homage to Arakelian's Middle Eastern family roots in Lebanon. While the restaurant has a sleek, airy, and hip environment, the food here is straight comfort. Drag fresh pita bread through Hummus Mushakal topped with braised short rib, lamb, and zhoug. Scoop up delicious Baba Ganoush from a whole-roasted eggplant with creamy tahini and red onion dusted with Aleppo pepper. The house-made bread, which is baked in a glowing, tiled, wood-fired oven, nods to Nashville's Kurdish community, the largest in the United States. It all makes Lyra the kind of place where you'll feel transported yet right at home. lyranashville.com

Chef Philip Krajeck made his mark in Music City back in 2012 with Rolf and Daughters, which remains a favorite for locals and visitors alike. Then in 2018 he gave the area another gem, Folk. Located in growing East Nashville, this place turns out fresh configurations of seasonal ingredients in a space that feels equally fresh and light with its paper lantern globes, exposed brick wall, and humming open kitchen. The menu is broken up into four easy sections: Snacks, Vegetables & Fruits, Seafood & Meat, and Pizzas. In the veggie section, find winners like Fioretto cauliflower with almond, raisin, calabrian chili, and anchovy. The wood-fired pizzas, with their patches of charred edges. sometimes arrive piled with local produce or umami flavors such as the clam pie with bonito, chili, lemon, and parsley. goodasfolk.com

You might expect Maneet Chauhan—one of the city's brightest food stars with her television appearances, books, and restaurants—to be too famous to actually spend time in Nashville. But she can be spotted regularly in the kitchen at her flagship restaurant Chauhan Ale & Masala House. The restaurant's menu is a beautiful collaboration between Chauhan's love for Southern cuisine and her background in Indian cooking. Dishes range from the innovative Pork Keema Papadi Nachos with tamarind chutney and provel cheese to the traditional Masala Braised Lamb. The space, chock-full of cozy exposed brick and warm lighting, feels just as vibrant and inviting as Chauhan's personality. chauhannashville.com

In late 2018, Nashville native and supper club maestro Vivek Surti put down roots in a brick-and-mortar space that seats about 40 people in a cozy Germantown nook. He has maintained an intimate atmosphere, even under a massive, 7-foot crystal chandelier that he found in his parents' garage. Surti, a first-generation son of immigrants, serves food that feels like home cooking–in other words, his grandmothers' own recipes—which he explains through stories between courses. Choose from two seating times, four nights a week, starting at $100 per person. tailornashville.com

Local and seasonal produce appears in many forms on the menu of Chef Julia Sullivan's American eatery and oyster bar. The Nashville native opened the contemporary eatery in 2017 and it was nominated as a semifinalist for the James Beard Award Best Restaurant category only a year later. At Henrietta Red, named for Sullivan's grandparents, seafood is the star of the menu. In addition to an impressive raw bar featuring more than 15 different oyster varieties, you can get your catch expertly prepared in dishes like the Snapper with farro, eggplant, basil chermoula broth, calabrian chili and Wood Roasted Squid with chicory, pepita, apple, and shishito. It all pairs perfectly with general manager and sommelier Allie Poindexter's natural wine selection. henriettared.com

Nashville native Chef Tandy Wilson's longtime local favorite is still as relevant as ever with Southern-Italian dishes interweaving Nashville-grown and sourced ingredients. There's a bit of everything on the menu, so bring friends and be prepared to share. Start with a few small plates, that show off the best of the season's bounty. In fall, you might find options like spaghetti squash with garlic crema, pecorino, apples, arugula, and pecan pesto or sour corn cake with white beans, escarole, toasted garlic, and pepper sauce. For dinner, go super Southern with a showstopper like the cornmeal-crusted catfish with cabbage, winter squash, marinated peppers, and cornbread crumbs. And definitely don't miss a slice of the restaurant's signature peanut butter tahini ice box pie. cityhousenashville.com

Dining is an experience at this tasting menu-only restaurant from famed chef Sean Brock. After opening in July 2022, a seat at Chef Brock's table has quickly become one of the hottest tickets in town. Dinner at June consists of 18-20 courses split into five acts. The menu changes eight times a year, twice a season, so there's always something new to discover. Located in East Nashville's McFerrin Park, the space features a large open kitchen where diners can watch chefs--more like artists--prepare each meticulously designed dish. Past creations have included cherrywood smoked scallop with fennel, grilled porcini with yuba, eggplant, and garlic scapes, and Texas deer with corn and okra. junenashville.com 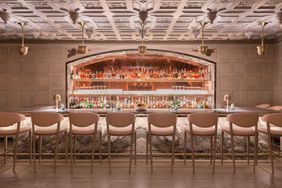 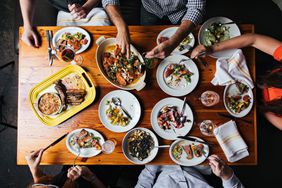 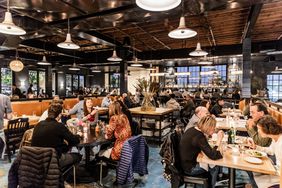