When you're looking for a fun trip that the whole family can get excited about, visiting a national park is always a good bet. These destinations have lots to recommend them, including plenty of outdoor attractions plus fresh air, learning opportunities, and room to roam. We've rounded up a few of the best national parks in South Carolina to inspire your next trip to the Palmetto State. Whether you're looking for trails to hike, historical info to absorb, or picnic spots where you can sit awhile, there's a spot on this list for you. This is just a small selection of South Carolina's parks, and you can learn about the rest at nps.gov. Read on for an introduction to a few of the South Carolina state parks that are well worth a visit this season.

Those who love spotting wildlife will enjoy a trip to Congaree National Park. The National Park Service explains that "astonishing biodiversity exists in Congaree National Park, the largest intact expanse of old growth bottomland hardwood forest remaining in the southeastern United States." There, you'll find rivers including the Congaree and Wateree, as well as opportunities for camping, fishing, and paddling canoes and kayaks.

The historical significance of this site dates to the American Revolution, when a battle was fought here. According to the National Park Service, "A pasturing area at the time of the battle, this Revolutionary War site commemorates the place where Daniel Morgan and his army turned the flanks of Banastre Tarleton's British army. This classic military tactic, known as a double envelopment, was one of only a few in history." You can find videos of past guided walks of the 845-acre park online.

When you visit Fort Sumter and Fort Moultrie, you can learn about the American Revolution and the Civil War through tours, exhibits, and the resources available in on the grounds and in the The Fort Sumter Visitor Education Center at Liberty Square. You can reach Fort Sumter, an island in Charleston Harbor, by ferry, while Fort Moultrie is located on Sullivan's Island.

This national park commemorates an important battle of the American Revolution. The National Park Services describes it, saying, "The battle of Kings Mountain, fought October 7th, 1780, was an important American victory during the Revolutionary War. The battle was the first major patriot victory to occur after the British invasion of Charleston, South Carolina, in May 1780." You can take hikes through the park during the day and see an array of the plant and animal life that calls the park home.

This historic site examines the life of Charles Pinckney and preserves Snee Farm, one of the plantations he owned in the Charleston area. Visitors can learn about the site's history and the lives of the African people he enslaved through the site's interpretive signage, educational exhibits, and films. According to the National Park Service, "Congress established Charles Pinckney National Historic Site in 1988 to preserve the site of Pinckney's former home […], and to interpret his life, the lives of Snee Farm's free and enslaved inhabitants, and the early history of the United States." The site is also part of the Gullah Geechee National Cultural Heritage Corridor, which, according to the NPS, "preserves and interprets the unique local culture of descendants of enslaved Africans."

Visit this National Historic Site in South Carolina's Piedmont region to learn about the 18th century history of the Palmetto State. The programming here explores the original frontier settlement that was established here—which included an earthen star-shaped fort—as well as the South's first land battle during the Revolutionary War. According to the National Park Service, "The unusual name [of the town] was given by Charleston traders in the early 1700's because they thought it was the estimated remaining number of miles from here to the Cherokee village of Keowee in the upper South Carolina foothills." 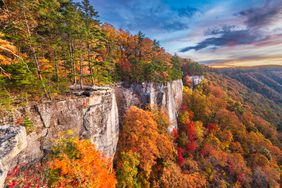