There's a moment at Hunting Island State Park as you're biking along the Lagoon Trail—ocean breezes and intoxicating beach vistas playing peekaboo to your left—when the sandy path turns inland and a sign points to Diamondback Rattlesnake Trail. A good idea? Yes.

"Yes," it turns out, sums up the best way to experience Beaufort, South Carolina, and its environs, including Hunting Island. Yes, the path less taken is an excellent idea, as is the Sweet Tea Float at Scout Southern Market. Spending hours strolling through The Old Point and gazing at historic homes and even older live oaks offers endless enchantment. But with my eyes peeled for rattlers, I was (yes) relieved that the only serpentine thing I discovered was more of the winding trail along old dune ridgelines through a primordial wonderland. 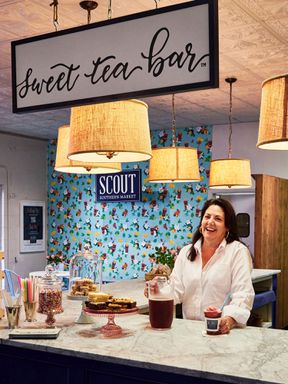 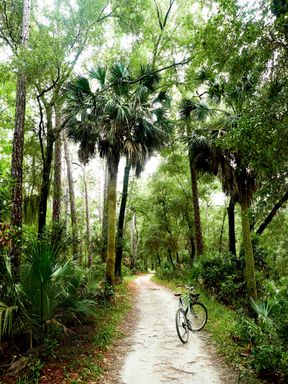 The trail affirms why Hunting Island, a breathtaking 25-minute drive from Beaufort, is South Carolina's most popular state park. With a dozen similar paths and 5 miles of pristine beach, this place leads you back eons in time through an untouched maritime forest with towering pines and ospreys soaring overhead as well as magnolias and saw palmettos tangled with yaupon hollies and wax myrtles in the dense understory. Here you breathe deeper and look more closely. Life slows down, and a sense of awe percolates up.

Take a seat on one of the bench swings at Beaufort's Waterfront Park. Wide and welcoming, they move back and forth in a rhythmic lullaby. You can't help relaxing, especially if you happen to catch a sunset or tune into the soft lapping of the Beaufort River against the floating dock, hearing the jingling clink of pulleys against sailboat masts—a mariner's wind chime. 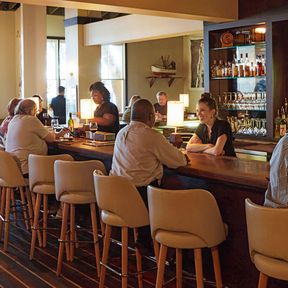 Saltus River Grill, where the scenic setting rivals the exceptional food and drink. 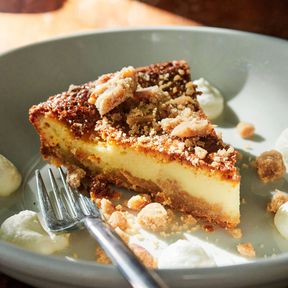 Waterfront Park showcases the smart civic planning that makes Beaufort such a delight: The town's best vistas are protected and preserved. There are thoughtful amenities (parking, public bathrooms, an amphitheater, picnic tables, and plenty of green lawn for kids and dogs to play on). Plus it's all conveniently adjacent to an enticing array of restaurants, coffee shops, and stores along Bay Street. What better nightcap than to sit and swing a spell after enjoying grilled scallops or top-notch sushi at Saltus River Grill? 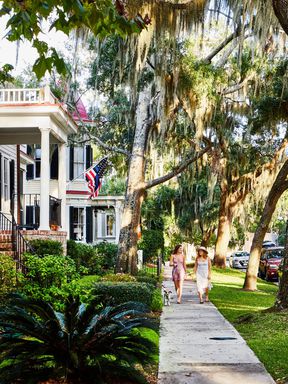 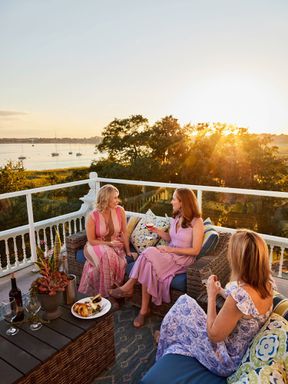 Beaufort is subdued in the best possible way. She has the same deep history and stunning architecture that her nearby sisters, Charleston and Savannah, are celebrated for, but she's fine staying slightly out of the limelight. Wise and mature, Beaufort wears her age like the badge of honor it is. Her Lowcountry aura feels elemental, with more patina and less pomp. Along Short Street at the edge of The Old Point, moss-heaped limbs cradle historic mansions. Beaufort's treescape shouts of grandeur in whatever language oaks speak. Gardens and yards aren't so much manicured as they are magical. It's easy to see why Hollywood frequently comes calling (a stairwell at The Beaufort Inn features posters from major motion pictures filmed here). Longtime resident Pat Conroy was so smitten that he wrote, "When I came to Beaufort I had struck upon a land so beautiful I had to hunt for other words."

Not far from Short Street, the First African Baptist Church, a Gothic Revival gem built by freedmen in 1865, bears witness to Beaufort's African American, Gullah, and Reconstruction-era history. "Robert Smalls was a member here. This document notes his Sunday school attendance and that he put a few cents in the offering plate," says the Rev. Alexander McBride, a jovial former marine and the church's pastor of almost 20 years, pointing to framed, yellowing pages hanging behind the sanctuary. A statue of Smalls, an enslaved crewman who heroically commandeered a Confederate ship and later served as a U.S. Congressman, is less than a mile away at Tabernacle Baptist Church, where a monument to Harriet Tubman is also planned.

Both churches are worthy stops, along with the Penn Center across the bridge on St. Helena Island, the Gullah Art Gallery/Museum on Bladen Street, and the Legacy Art Gallery on Bay Street. Each place gives a deeper insight into the region's vibrant and enduring African American and Gullah Geechee culture. Providing an overview of Beaufort's past, Capt. Henry Brandt of Coastal Expeditions offers a boat tour that cruises through the area's Native American, Spanish, and French history; Union occupation; and a view of Camp Saxton's tabby ruins, where the Emancipation Proclamation was first read in South Carolina—all interspersed with musings on estuary ecosystems and the fecund marvels of pluff mud.

"You don't fully experience Beaufort until you see it from the water," Brandt claims. After watching dolphins curl and glide from the boat's bow and admiring the town's steeples rising in the background, I absolutely believe him.

Anchorage 1770
Boutique hotel in an 18th-century mansion with fine dining at the Ribaut Social Club; anchorage1770.com

Scout Southern Market
Unique gifts and home goods as well as delicious treats like the famous float at the Sweet Tea Bar; scoutsouthernmarket.com

The Chocolate Tree
Confections such as fudge, truffles, and peanut brittle; thechocolatetree.us

See the other Small Town winners here
Was this page helpful?
Thanks for your feedback!
Tell us why!
Related Articles