“P.S. If you listen to country music you know who this is…”

A server at a Waffle House in Greensboro, North Carolina, was shocked by the kind words and generosity of an anonymous country singer last month.

Shirell "Honey" Lackey shared the interaction on Facebook along with a photo of the receipt boasting a staggering $1,000 tip on an $11.99 meal.

"A country music star just came in the restaurant and tipped me $1,000 gave me two tickets to his next show and got my address to send the baby diapers clothes etc. (plus hugged me... twice) because I had to have her at work with me for 15 hours today," Lackey revealed.

She said she thought "long and hard" about whether to share the story out of respect for the singer's privacy but decided to "just keep his name out of it."

According to Lackey, the singer's bus driver overheard her and a coworker talking about how she is sometimes forced to bring her young daughter to work when she "absolutely has to." The bus driver reportedly relayed the story to the unnamed singer, who approached Lackey personally.

"He came to me and said that in a society where nobody wants to work, he had to respect the hustle of someone who is willing to do whatever it took no matter what to support their child and I started crying," she wrote on Facebook. "I was almost in shock to receive such an amazing gift."

"P.S. If you listen to country music you know who this is…" Lackey added.

Thoughts on who the kind benefactor was? We have a few guesses ourselves 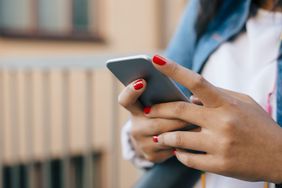 Is a Thank-You Text Ever Okay?