The Tradition of North Carolina Fish Camps, And How the Recipes Live on Today

Fish camps are casual restaurants that specialize in perfectly fried seafood with plenty of piping hot hushpuppies and simple side dishes, washed down with endlessly refillable cups of ice-cold sweet tea. These restaurants are often family run, akin to hometown barbecue joints, with similar vibes and loyalties. Although one can find a few fish camps in South Carolina, Georgia, and Florida, they are strongly associated with North Carolina.

The original fish camps date back to before World War II. They were little more than rudimentary waterside kitchens, either outdoors or in smaller spots along riverbanks or coastal sounds, where fishermen could cook what they caught. Some of the fishermen saw entrepreneurial opportunities and hired cooks to help out. Over time, these camps evolved into no-frills seafood restaurants, a few of which remain in business today. Some are in the same locations as the old camps, while others moved a little closer to town.

Fish camps served not only as restaurants, but as community gathering places where friends and extended family could catch up over a good meal. The fare provided hearty servings at reasonable prices.

Coastal fish camps catered to locals and tourists alike. Some places were so busy during the high season that guests had to wait in line for their turn, but were happy to do so because a fish camp feast is a must-do vacation tradition.

Fish camps have their distinct personalities, but their menus are remarkably similar. Fried fish and seafood hold center stage. (There might be a token burger or chicken finger choice, but that's only for stubborn landlubbers who don't know what they're missing.) Few places do a better job of frying fish than a fish camp. One can order broiled or steamed seafood, but that's a bit like going to an ice cream parlor for the ice water. Fish camp fish is battered or dredged and then deep-fried in oil that's hot enough to ensure it turns out browned and crisp instead of heavy or greasy. Guests can order their favorite kind of fish, but many look to a classic seafood platter for a little bit of everything, even old-fashioned deviled crab, which is essentially a crab cake cooked inside a clean crab shell that's far more charming than a ramekin.

One of the most popular fish camp items is Calabash shrimp, a style of fried shrimp that originated in the North Carolina coastal community of the same name. What distinguishes it from other types of fried shrimp is the size of the shrimp (quite small, no larger than bite-size) and the type of batter (notably light). Fish camps can have their secret ingredients and signature ways, but most written recipes for Calabash shrimp batter include self-rising flour and canned evaporated milk. The shrimp are flash fried, only until batter sets and well before the shrimp overcook. The result is plump, sweet shrimp encased in a pale golden crust that is so light and airy it almost shatters. An order of Calabash shrimp, even a so-called half order, is a towering pile of shellfish. They'll give you a fork (often wrapped in a paper napkin secured with a paper ring), although many people cannot resist tossing Calabash shrimp into their mouths like a handful of popcorn. It's a fish camp favorite that never goes out of style.

Fish camp orders come with plenty of hot hushpuppies, usually fried in the same hot oil used for the fish. Some are round, about the size of a golf ball. Others are oblong, about an inch in diameter and a couple of inches long with slightly tapered ends. Some hushpuppies have a whisper of sweetness, while others are seasoned with finely minced onion. At one time, the cooks dropped the batter off spoons into the hot oil, but most fish camps now rely on machines that extrude hushpuppies into the fryers at a pace that can keep up with demand. It takes a lot of hushpuppies to keep a fish camp going. One North Carolina fish camp at a busy crossroads in a small mountain town estimates they've served at least 9 million hushpuppies over the course of their 50 years in business.

Most fish camps provide big squirt bottles of tartar sauce and classic red cocktail sauce on the table, as expected as ketchup, hot sauce, salt, and pepper. People are coming for the fish, so side dishes are modest, but good, usually a choice of potato (crinkly fries or baked) and a serving of creamy coleslaw. Most fish camps offer simple desserts such as banana pudding and peach cobbler. Those who have just polished off a fish camp feast often forgo dessert, swearing that they're so full that they'll never eat again. Who are they kidding? Fish camps keep folks coming back. 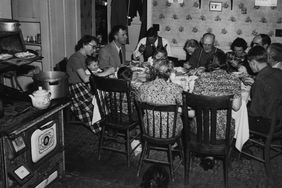 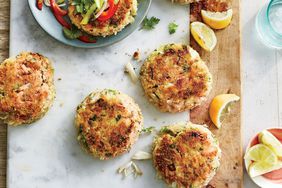