"It was everything I've ever wanted, ever dreamed of."

A North Carolina couple became the first couple to get married at the iconic Frying Pan Tower over the weekend.

Surrounded by 10 of their closest friends and family members, Ben and Audrey Black said "I do" atop the old lighthouse 32 miles off the coast of Wilmington on Saturday. All 12 of them arrived via helicopter.

"It was everything I've ever wanted, ever dreamed of," Audrey told WWAY. "It was perfect."

Frying Pan Tower, which made headlines for its Hurricane Dorian livestream in 2019, stands 135 feet above the ocean. It was constructed in the early 1960s to replace the U.S. Coast Guard lightship that had helped mariners navigate the shallow waters of Frying Pan Shoals for more than a century.

The Frying Pan Shoals Light Station was abandoned by the Coast Guard in 2004 and was purchased at auction by software engineer Richard Neal in 2010. Neal established the FPTower non-profit in 2018 and has spent the following years restoring the structure and promoting environmental research.

Ben volunteered to help with the restoration of the tower in 2020. Speaking with WWAY, he recalled how exactly one year before the wedding, he sat on its helipad and prayed that he would find his soulmate. Four days later, he reconnected with an old friend: Audrey.

Later, when Audrey suggested they get married at Frying Pan Tower, he was instantly sold on the idea.

"It wasn't necessarily a race to get out there to be the first by any stretch, it just so happened it worked out that way," Ben told WWAY. "To be the first to get married out there is pretty cool."

Neal, who in addition to running the operation is now an ordained minister, told Southern Living that he hopes Frying Pan Tower will host more weddings in the future.

"It turned out to be such an amazingly unique and special event," Neal said.

You can certainly say that again! Congrats, y'all. 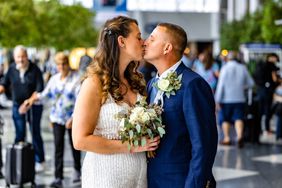 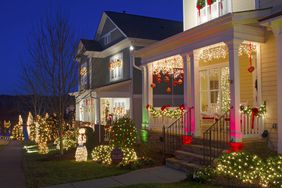