With more breweries per capita than any other city in the U.S., an ice-cold tall one is never more than a few blocks away in the western North Carolina mountain town of Asheville. The perennial contender for the country's best beer city offers a dizzying array of brews to whet every beer lover's whistle. But what makes the city extra impressive is its brilliant class of brewers dedicated to pushing the boundaries of their craft. Their talent and creativity is apparent in everything they bring to the bar, from funky fruit sours and double-hopped IPAs to malty stouts and crisp ales. Here are the best breweries to visit in Asheville.

When Archetype was founded in 2016, its West Asheville home was just beginning to bloom. Owners Brad and Corina Casanova wanted to create a social hub that reflected the neighborhood's vibrant personality. The result was Archetype, a small-batch brewery utilizing Belgian brewing practices to create everything from funky farmhouse ales to aged saisons and well-balanced lagers. In 2019, Archetype added a second taproom in downtown Asheville with intimate gatherings and events in mind.

Forgot popcorn and a movie. At Asheville Brewing Company, the name of the game is "brew and view," thanks to a combo movie theater and brewpub that redefined the "dinner and a movie" date in 1998. Over the years, the city's third brewery has opened two more locations in South Asheville and South Slope. Each offers a huge selection of canned and on tap beer, including the award-winning Ninja Porter and fun twists like the Big Red Llama strawberry hibiscus ginger beer.

Sour and barrel-aged brews take center stage at this funky South Slope taproom. Named after the Hindu goddess of bees, Bhramari has remained buzzing since opening in 2016—partially because its brewers aren't afraid to take risks. Case in the point: the Stout Chocula, an imperial stout brewed with Count Chocula cereal, marshmallow, cocao nib, and vanilla. They also produce a specialty sour brewed with toaster pastries.

New Orleans transplants Doug and Jess Reiser will celebrate the 10th anniversary of their South Slope brewery in 2023. The brewery shines in nearly every style of beer and is known for its ever-expanding list of one-off microbrews. And though Burial is playfully morbid (with brew names like A Fall From Grace, Put Youth Behind You, and The Final Serenade), their beer is decidedly life-giving. Check out their Forestry Camp location for more Burial magic, including a tour and tasting experience, thoughtful food pairings, and special wild and sour barrelhouse brews.

New kid on the block, Cellarest Beer Project is shaking things up with a modern approach to brewing. The microbrewery features just four barrels, but the big kicker is that Cellarest utilizes an all-wood fermentation process. Three different types of wood are used for fermentation, lagering, and aging to provide a depth of flavor not found in other beers. The farmhouse inspired lagers pair perfectly with the casual outdoor atmosphere at the operation's beer parlor. It's also worth mentioning that all of Cellarest's beer are friendly for those with gluten allergies or intolerances.

Things tend to get a little weird at this downtown beverage company, and that's exactly the way its owners envisioned it. Beer is at the forefront of the downtown hangout's production, but fermentation for wine, cider, mead, and non-alcoholic beverages is also big part of the plan. DSSOLVR's motto "Brewed Until Surreal" is exhibited in everything the brewery touches, from its psychedelic beer labels and murals to off-kilter brew names like I Hate You…Always Have Amber Ale and Pleasant Murmurs Fruited Marshmallow Smoothie Sour.

Housed in a renovated barber shop in Asheville's bustling South Slope neighborhood, Eurisko has maintained a strong and steady presence since opening its doors in 2017. The three high school friends behind the brewery keep their rotating taps at a manageable number, but still incorporate plenty of specials, like big imperial stouts and modern hop experiments, to keep things interesting. Coffee fiends should be on the lookout for varieties brewed with coffee from local roaster PennyCup.

The French Broad River, which flows through Asheville, is the world's third oldest river. It's older even than the Appalachian Mountains it cuts through. French Broad River Brewery, which opened in 2001, pays homage to the life-giving river with a line of crisp, fresh beers that pair perfectly with a day on the water. Try the Gateway Kolsch or Midnight Paddle Black IPA, which won gold in the 2020 North Carolina Brewer's Cup.

A pioneer in Asheville's craft beer scene, Green Man Brewery has years of wisdom and experience under its belt as one of the city's three longest-running breweries. There are two places in town to get your fill of the brewery's hop-forward beer, the two-story Green Mansion production facility in South Slope, and Dirty Jack's, it's smaller, cozier sister taproom located just down the street. To celebrate its 25th anniversary in 2022, the taprooms are rereleasing several retired classics throughout the year.

See where it all began at Asheville's first brewery. With its larger-than-life footprint and gorgeous setting overlooking the Blue Ridge Mountains, the founding father of Asheville's beer scene is as relevant as ever. The 40-acre facility features several places to stop for a sip, including a sizable taproom, expansive patio, and a huge family-friendly grass venue called The Meadow complete with a bar and stage. Adjoining volleyball courts, hiking trails, and a disc golf course make Highland Brewing the ultimate hub for weekend warriors.

This no-nonsense brewery boasts two locations in the Asheville area, one in Biltmore Village and one in neighboring Old Fort (which happens to be in a dry county). The family-owned operation started with Brad Hillman, who began homebrewing while living in Brooklyn, New York in 2006. Once his brother Greig and sister-in-law Brandi convinced him to make his way South to Asheville, the three began planting the seed for Hillman Beer in 2015. At both breweries, be sure to try the award-winning ESB and the classic IPA.

A veteran of Asheville's brewing scene, circus-themed Hi-Wire Brewing always has something new to surprise and delight thirsty patrons with. With locations in South Slope, Biltmore Village, and the River Arts District, plus a healthy expansion into several other Southern states, Hi-Wire has perfected the art of easy-drinking, approachable beer. Flagships like the Hi-Wire Lager and Mountain Water Citrus Splash Ale are year-round favorites, while seasonal specialties like the Zirkusfest Oktoberfest lager keep things interesting.

Though New Belgium was founded in Fort Collins, Colorado, we couldn't resist including the brand's massive East Coast outpost to our list. The sprawling campus anchors West Asheville's River Arts District along the French Broad River and is as much a part of the fabric of the city as any locally grown brewery. While you can always get favorites like Fat Tire and all of the Voodoo Ranger IPAs at the brewery, be on the lookout for limited-time barrel-aged experiments tested on site. A family-friendly greenspace and rotating food truck lineup round out New Belgium's community feel.

Thirsty Monk started out as a single brewpub pouring Belgian-style beers in 2008. In the 14 years since, the operation has expanded to include three separate Asheville locations, plus two more in Denver, Colorado and Portland, Oregon. In addition to pouring its flagship Belgian beers like Abby Blonde Golden Ale and Ponder Lager, Thirsty Monk diversified its offerings with a line of hard seltzers called Holy Water and house cocktails. If you go, make sure to order a "food flight" of chef-driven pub food to pair with your pour.

This laidback brewery invites visitors to sit and stay for a spell. After years as a home brewer, owner Tim Weber decided to scale his operations by opening Twin Leaf in 2014. He kept the homey feel by supplying his South Slope taproom with giant Jenga, foosball, and shuffleboard, and providing water bowls for four-legged family members who want to join in on the fun. The brewery offers a good mix of styles, but is especially deft at whipping up IPAs.

Wicked Weed is rooted in community. Since opening its first taproom in 2012, the brewery has expanded with two more taprooms, as well as a fine dining restaurant called Cultura, all located in the city. And though the brand has flourished over the past decade, with several flagships distributed across the country and a high-profile buyout by Anheuser Busch in 2017, Wicked Weed will always be quintessential Asheville. Their Funkatorium location, which specializes in sour and funky fermented brews, is often a first stop for those looking to complete their Asheville brewery bucket list. 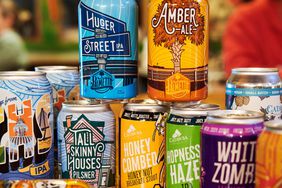 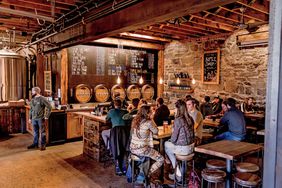