This river town opens its arms to the future (and out-of-towners) in its most hospitable chapter yet.

Oak trees draped in Spanish moss line U.S. 61 as I make my way north from Baton Rouge. Fallen branches, rogue roof shingles, and lagniappe debris also cover the side of the road, a humbling reminder of Hurricane Ida's landfall in August 2021.

But St. Francisville, a hamlet nestled along the Mississippi River between Baton Rouge and Natchez, Mississippi, has persevered for ages. France, England, and Spain each claimed this area for a time. Slavery, wars, and hurricanes all left lasting scars. Now, more than 200 years later, it's still standing, reexamining its past while reimagining the future. 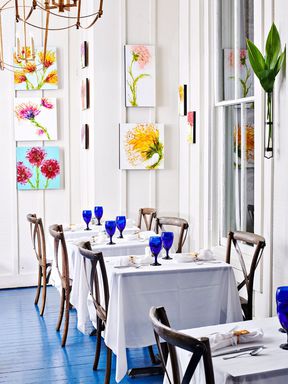 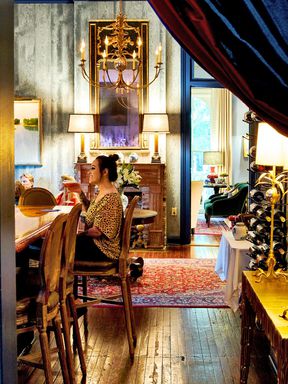 I grew up just a few parishes down the road (Louisiana calls its counties "parishes," a vestige of the state's time under French and Spanish rule), and it always felt like time traveling whenever I visited. Crossing the Mississippi on the now defunct ferry from New Roads seemed magical, sprinkled with the same adventurous allure immortalized by Mark Twain. The riverboat is gone, replaced in 2012 by the John James Audubon Bridge. Its sleek cable design boasts sweeping views of the meandering water, dotted with tugboats, barges, and river-cruise ships (a new development in the past decade that has brought droves of tourists, many international, to St. Francisville and the surrounding West Feliciana Parish). 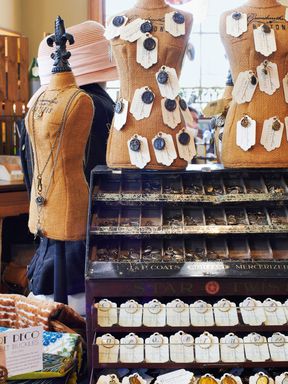 A glimpse of the selection found at Grandmother’s Buttons. 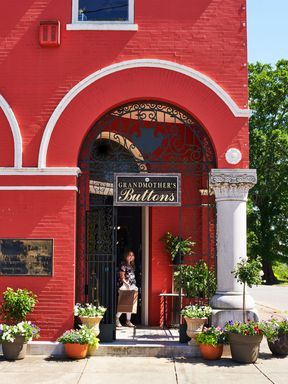 I, too, feel like a tourist because even though I currently live just an hour away, I have only recently moved back after being out of state for the past decade. I'm returning to this historic jewel with a more seasoned lens. It has always been regionally recognized as, to quote the lady at the gas station, "quaint as all get-out." Founded in the early 1800s, the once profitable port still touts many homes and structures from that era. With a population of fewer than 2,000 and an everyone-knows-your-mama energy, it has attracted weekenders and history buffs for years.

While I wander down the streets of the historic district, a New Orleans tour bus unloads a new crop of wide-eyed visitors at the West Feliciana Historical Society Museum. The town's idyllic lanes feel like a movie set, with postcard charms around every corner. Informational plaques are posted outside old homes turned bed-and-breakfasts, like the newly renovated five-star St. Francisville Inn. Shops such as vintage outpost Grandmother's Buttons and antiques hot spot Sage Hill Gifts are catnip for the design-forward set. I eat fried alligator bites at the popular Magnolia Cafe, where vacationers devour regional fare like fried-shrimp po'boys and locals secretly swear by the tasty cheeseburgers. 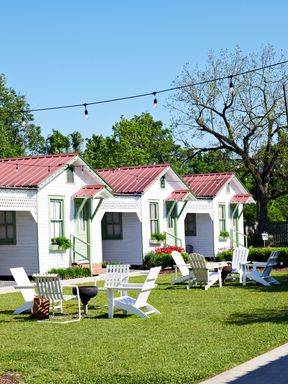 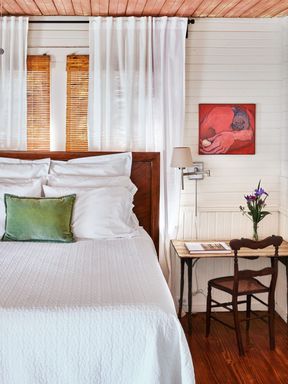 Past the St. Francisville city limits, West Feliciana Parish really sings. Travelers flock to the area's natural attractions, a testament to the booming ecotourism industry. Although Louisiana has never had a reputation as a hiking destination, Tunica Hills Wildlife Management Area is an exception. Its picturesque terrain features some of the state's most diverse flora and fauna plus topflight bird-watching. Cat Island National Wildlife Refuge is the home of the largest bald cypress tree east of the Sierra Nevada mountains; it measures a jaw-dropping 96 feet tall and 17 feet in diameter. 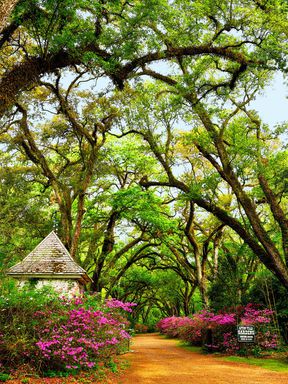 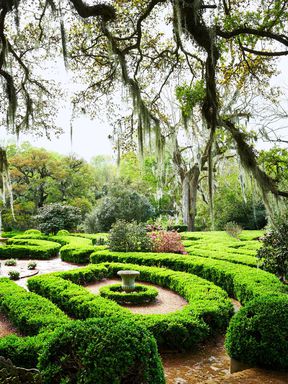 Down U.S. 61 is Afton Villa Gardens. It's virtually impossible not to be moved by the majestic canopy of oak trees and row after row of blooming azaleas leading to over 20 acres of gardens rivaling the great estates of Europe. Immersed in this beauty, you can't help but ask, "Where am I again?"

While the community has made great strides to highlight its unique topography and bird populations, you can't visit St. Francisville without acknowledging the silenced sorrow that lies behind the splendor of the area's other main attractions: plantations.

Six grand estates are currently open to the public for tours. In past decades, the area has leaned heavily on the pomp and pageantry of these historic homes. But over the years, there has been a slow, steady drive to broaden the selective narratives surrounding these properties. People have vocalized the one-dimensional representation or complete omission of the enslaved men, women, and children who worked and died there.

As the community revisits its plantation legacy, change is happening. In June 2020, advocates called attention to the West Feliciana Historical Society's Audubon Pilgrimage. This annual celebration included plantation tours, galas, and antebellum-period costumes. A petition signed by thousands called for change, prompting the West Feliciana Historical Society to permanently cancel the decades-old event, saying, "We will focus our efforts on providing a complete and accurate history of our parish in a meaningful way that is relevant today and in the future." 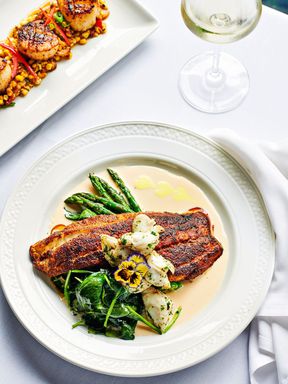 Chef Michael Dardenne’s blend of Cajun and European traditions at The Saint. 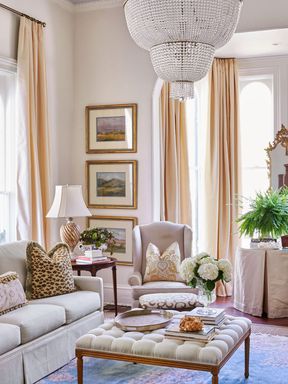 More progress is on the horizon as this river town continues to learn and grow. But the magic I rediscovered isn't in its photogenic streets, natural beauty, or mystifying Southern allure (like that of the winding Mississippi River I crossed by ferry years ago). It's in the people who call St. Francisville home and strive to make it a better place tomorrow.

Vintage frocks, regional art, and heirloom jewelry fill the first floor of Grandmother's Buttons. Formerly a historic downtown bank, this shop is complete with a button museum. Owner Susan Davis' passion for the tiny accessory took flight in 1985, thanks to her then 95-year-old grandmother, Bettie, a consummate collector who shared more than 30 boxes of vintage buttons with her. Davis sorted through the treasure trove, pausing on sparkling 1930s jet-glass ones and commented, "These should be earrings." The rest is history. She began repurposing them into jewelry, eventually turning the hobby into a full-time business. In the museum, Davis displays just over 1,000 rare and historic buttons that date from the 1770s to the 1950s. But her total collection numbers over 50,000, much more than her grandmother once had. Customers from as far away as New Zealand have enjoyed the shop, and she hopes St. Francisville will continue to attract more people while maintaining its charm. "Everyone goes to the post office every day," says the lifelong resident with a laugh. "Even with the tourists, it's still a close community."

"I was hired for a two-week job to pull vines out of azaleas in 1973. Almost 50 years later, they still haven't asked me to leave," says Ivy Jones, laughing. He's now head gardener and manager of Afton Villa Gardens. The property has more than 20 acres, including the ruins gardens (the site's historic home burned in 1963), a daffodil valley, a formal parterre garden, and more. It's owned by Genevieve Trimble, a nationally recognized garden preservationist. Even at 100 years old, Trimble still talks with Jones daily about the garden. He loves springtime at Afton Villa. "While they don't last long, tulips are my favorite," says Jones, who plants 8,000 tulip bulbs, along with daffodils, every winter for mid-March blooms. "It's a beautiful sight to see and never gets old."

Brandon Branch and Jim Johnston of The St. Francisville Inn

An interior designer and star of Southern Charm Savannah on Bravo, Brandon Branch was looking for a fun new chapter with his partner, Jim Johnston. "We wanted to work together and fulfill our lifelong dream of owning an inn," shares Branch, who grew up less than two hours away in Franklinton. After they purchased the circa-1880 St. Francisville Inn (previously called the Wolf-Schlesinger House) in 2018, the couple tackled a massive renovation, creating a destination with luxurious accommodations and a renowned restaurant and bar, The Saint. "We're attracting guests from all over the U.S.A.," notes Branch, who loves spotlighting his adopted city. "St. Francisville is amazing. It's not scared of change and embraces everyone. I was worried about two gay men moving to small-town Louisiana, but this place really opened its arms and welcomed us wholeheartedly." 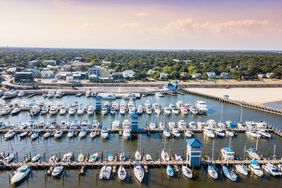