The Crescent City has a mighty hold on Kelly Fields, owner of the restaurant and bakery Willa Jean.

Like many visitors to this city, Kelly Fields fell in love with New Orleans at first sight. She was a teenager when she traveled there for Mardi Gras from Charleston, South Carolina, but she recalls that she knew it would be her future home. "I moved here as soon as I finished high school," Fields says.

Although she didn't come to New Orleans with dreams of becoming a chef, Fields soon found herself working, with little experience, at a small family-run bakery that had just landed a big contract. "They had to make 18,000 pieces of bread overnight," she recalls. "They recruited everybody they'd ever met or talked to, or even seen on the streets, to come help." That one day turned into a full-time job.

Like her instant attraction to the city, she knew the kitchen was where she belonged. Fields started her career working with Susan Spicer (one of NOLA's best chefs) at Spice, Inc.,a now-closed bakery and food market. "My nickname was 'Googly Eyes' because I just tried to absorb everything that I could," she says.

When Hurricane Katrina hit and flooded Fields' home, she spent some time away, living in Asheville, North Carolina, and then San Francisco. But New Orleans called her back. "When I returned in 2010, it was even more amazing than before because everybody who was here had made a really conscious decision to be here and be in it together," she says.

Now, more than 10 years later, it's hard to talk about baked goods in NOLA and not mention Willa Jean, Fields' restaurant and bakery that was named after her grandmother. Her ever-changing pastry case and Southern-style menu with biscuit sandwiches and buttery cornbread served with Poirier's Cane Syrup has earned national praise (including a 2019 James Beard Award) as well as a devoted local following.

The way the kitchen operates is as important to Fields as what comes out of it. When Willa Jean opened in 2015, she used her experiences—both good and bad—working in restaurants to create a supportive space where staff could learn and experiment. "I love the idea of people coming here and having fun and cooking food," she says. "They're finding their own voices and then taking all their knowledge and abilities and talents to go out and create their own versions of Willa Jean, whatever their dreams are."

Some of those dreams have already enriched the dining scene, like Luncheon, a pop-up by chefs Camille Staub and Colleen Allerton-Hollier, who met at Willa Jean. Fields calls their food exceptional and says she's equally impressed by their community work with local organizations like Southern Solidarity, which helps unhoused New Orleanians. Allerton-Hollier says, "Kelly was pretty clear with Camille and me; she wanted us to learn and chase after the things we wanted to do, even if it meant leaving Willa Jean. I have a lot of respect for that."

Although many of Fields' more recent projects (like mail-order baked goods and her first cookbook, The Good Book of Southern Baking) are taking her expertise far and wide, New Orleans' special energy keeps her there. "[It] has more soul than any city in America," she says. "I love so many places, but the way New Orleans lives and breathes is unlike anywhere else I've been in this country."

Her top spots for visitors and locals alike

Paladar 511
"It's a little Italian place. I usually sit at the bar and get a couple of appetizers. Paladar does such a beautiful job with produce. They show off what we have growing around us better than most restaurants in the city."
paladar511.com, 504-509-6782, 511 Marigny Street, New Orleans, LA 70117

Coutelier
"Many people need good kitchen stuff. I buy my mom a knife [there] every holiday to build her collection, because a sharp knife was not something I knew as a child."
couteliernola.com, 504-475-5606, 8239 Oak Street, New Orleans, LA 70118

City Park, Crescent Park
"I take my dog on long walks in City Park through the sculpture gardens. Crescent Park has a pedestrian area along the river, and you can see the whole city. You have the breeze and sounds and other things that make New Orleans what it is. It breathes life back into me."
neworleanscitypark.com; crescentparknola.org 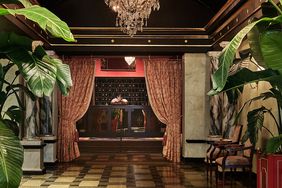