"To think this traveled so far.”

When Katie Posten walked out to her car on Saturday, she thought someone had left a note on her window.

She told CNN that when she got closer, she realized it was actually an old black-and-white photograph. The photo shows a woman in a striped dress with a child on her lap.

"Walked out to my car in New Albany, Indiana, and found this picture stuck to the window," Posten wrote on Facebook. "It looks like it reads 'Gertie Swatzell and JD Swatzell, 1942.'"

Posten told NBC News that she had been tracking the severe storms that tore across parts of the South and Midwest the night before, and immediately thought the photo could have traveled from nearby Kentucky.

"Seeing the date, I realized that was likely from a home hit by a tornado. How else is it going to be there?" she told NBC. "It's not a receipt. It's well-kept photo."

With help from Facebook, Posten was able to connect with Cole Swatzell, who said the photo belonged to his family in Dawson Springs, Kentucky—130 miles southwest of New Albany.

"To think this traveled so far, this is my dad's grandparents," Swatzell commented on the now-viral Facebook post.

In the small town of Dawson Springs, about 75% of the community was wiped out and replaced by "chaos," mayor Chris Smiley told CNN on Sunday.

"It's the worst thing I've ever seen," said Smiley. "It's just devastating."

Nevertheless, the Swatzell family plans to meet with Posten later in the week to retrieve the photo.

"(Social media is) a really powerful informational tool and when it's at its best, it's excellent and I'm thankful that when we use it for things like this that it has the power to connect us," Posten told CNN. "It has the power to accomplish things that are next to impossible." 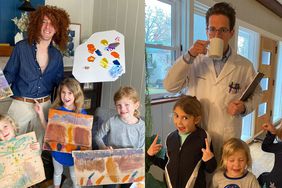