The Classic City’s grown-up food scene calls alumni back as much as the school spirit.

Ivy Odom
Ivy is an Editorial Producer for Dotdash Meredith and hosts an array of lifestyle videos. She also authors a bi-monthly recipe column for Southern Living. Ivy has over four years of experience as on-camera talent across multiple platforms, including TikTok, Snapchat, television, and other social channels, as well as extensive producing and editing experience for TikTok.
Southern Living's editorial guidelines

I like to pass the time on drives back to my college town by devising an itinerary based entirely on where I plan to eat. No matter the purpose behind the trip, whether a football-rival meeting between the hedges or a visit to a former professor's class, my focus is always the food. I start out by visualizing a map of the city. Punctuated by intersections I once crossed often, the streets link together in my mind. After taking the University of Georgia's exit, I'm led to the familiar intersection of Lumpkin Street, Milledge Avenue, and Milledge Circle. This crossroads is the heart of the historic Five Points area, and that means a homemade pick-me-up from Condor Chocolates is in order. Influenced by their mother's Ecuadorean roots, brothers Nick and Peter Dale launched their first location on Lumpkin Street to make their chocolate confections.

Their selection of artisanal truffles, bars, and other delights is vast, but their sipping chocolate and affogato are my go-to indulgences. Depending on my hotel check-in time, I may scoot a few doors down to some of the newer kids on the Five Points block. The Expat, situated in a quaint 1930s cottage, features a menu of Italian favorites, and the cleverly crafted cocktail list and friendly neighborhood service keep me coming back. Dinner Party is a can't-miss for every trip to Athens. Szechuan-influenced dishes (like Bouncy Peanut Noodles, Very Tasty Tofu, and Dry Fried Eggplant) are all served family style and are extra lovely when paired with a bottle of crisp white vino.

The next day, I love taking an early outing to Independent Baking Company for a croissant or cinnamony Morning Roll. Right next to the famous five-point intersection, locals line up for fresh loaves, coffee, and pastries to go. I'll head toward campus via Lumpkin Street for lunch on the patio at Cali-N-Tito's. The beloved BYOB, Latin-Caribbean-inspired cafe is in a prime spot within walking distance of South Campus and tailgates alike. If I'm lucky, I'll pass by an event that has called in the Lil' Ice Cream Dude to serve frozen treats from his Cool World mobile stand. Kid entrepreneur Beau Shell has been scooping since age 8 and has created an impressive ice-cream empire. I pass the corner of Sanford Stadium and swear I can hear the tune of "Glory, Glory to Old Georgia!" being played by the lone trumpeter inside. Just like that, my school spirit is reignited.

On game weekends, I try to avoid the busy corridor of Milledge Avenue from Five Points to Broad Street, as it's the main thoroughfare of Greek life here. Past the historic houses lining Milledge Avenue, I turn onto Baxter Street and make my way to Home.Made, a supper club turned dinner hot spot known for Southern cuisine with a modern spin. Even if I can't stay long, I pop in to grab cheese straws and pepper-jelly pecans for the road. 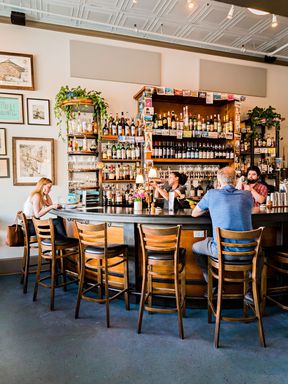 The first-come, first-served bar at The National. 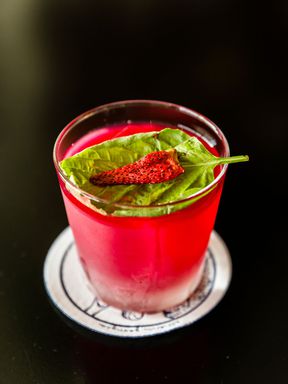 At the end of the day, I venture back downtown to West Hancock Avenue for a bite at The National. Although the globally inspired menu changes to reflect the seasonal bounty of northeast Georgia farmers, I've never had a meal here that didn't make me feel right at home. Across the street is Creature Comforts Brewing Co., featuring the famed Tropicália IPA. 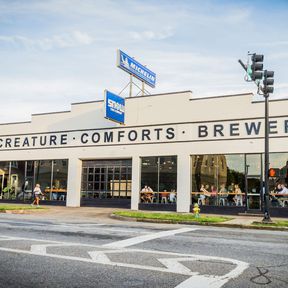 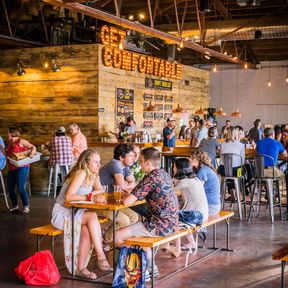 On off-season Saturdays, the Athens Farmers Market at Bishop Park is bustling. I might snag a sip of Juju from The Plate Sale. Splitting time between Athens and Atlanta, Shyretha and Michael Sheats have made a name for themselves in the food and farming industries of North Georgia. If you can make it to a Plate Sale pop-up dinner, you won't regret it. 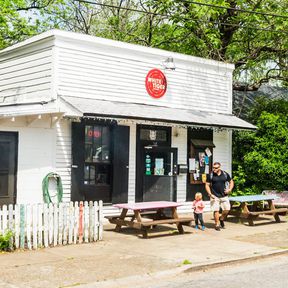 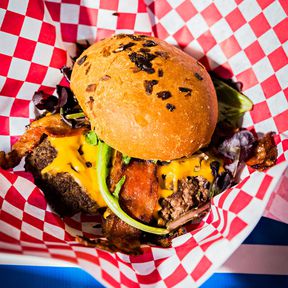 Afterward, I head to the Boulevard District, home to Maepole and White Tiger Gourmet, two off-the-beaten-path lunch places. Maepole, known for its plant-forward and gluten-free menu, lets you choose a base (like mashed sweet potatoes or quinoa), a protein, two sides, and a sauce. It approaches Southern food in a healthy, wholesome way. White Tiger is my pick for barbecue and burgers, but the vegetarian offerings are impressive too. It's housed in a 100-year-old building that once served as a grocery store, so the charm goes far beyond the smoked meats.

I finish out the night at Seabear Oyster Bar, where a dozen bivalves on the half shell are best accompanied by brown butter-balsamic Parker House rolls.

A final sleep at the Graduate Athens hotel wraps up my weekend, but not without a trip down Broad Street to Ideal Bagel, where I get the everything version with a flavored cream cheese spread. If it's Sunday, I'll mosey over to Food for the Soul for lunch. This eatery makes some of the best fried chicken and slow-cooked vegetables outside of Atlanta. 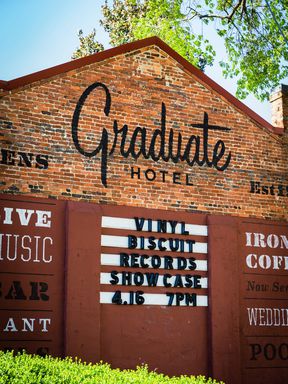 Graduate Athens hotel is a great location and vibe. 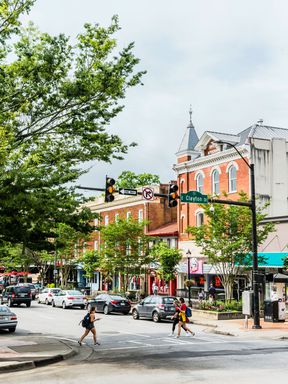 With both my belly and my mind full from memories of a weekend well spent, I hunker down for my journey home. But if "Old Lady Luck" is on my side, it won't be long until I return, because there's one thing all Dawgs know: If you're hungry enough, all roads lead to Athens.

See the other College Town winners here
Was this page helpful?
Thanks for your feedback!
Tell us why!
Related Articles