This Food-Friendly Florida Town Is an Architectural Treasure

It might be the Ancient City, but it's not a sleepy one.

The best getaways are those that leave you feeling like you've really been somewhere—a destination that takes you out of the ordinary. St. Augustine fits the bill.

Founded by the Spanish in 1565, the "Ancient City" is an architectural jewel on Florida's Atlantic Coast, about midway between Jacksonville and Daytona. Gilded Age industrialist Henry Flagler first saw the tourism potential in this charming town on the Matanzas River, now just a bridge crossing from the surf at Vilano Beach and Anastasia State Park.

Given convenient rail transportation and upscale hotels, Flagler believed his wealthy friends from the Northeast would flock to Florida. You can spot his influence all over the city, from his spectacular Ponce de León Hotel, now Flagler College, to other hotels and churches he built in the Spanish Renaissance style. Eventually, the posh set came to prefer warmer weather farther South, but what they left behind was a pedestrian-friendly town with an overflow of historic character.

Want to duck the public parking lots and touristy trams? Book a room within north-south bounds of Cuna and Bridge Streets, with Avenida Menendez and Cordova Street as your east-west borders. You can walk to just about everything. Try splurge-worthy Hilton St. Augustine Historic Bayfront and marvelous Casa Monica Resort & Spa. The Inn on Charlotte Bed & Breakfast is convenient and adults-only, while the Agustin Inn Bed and Breakfast actually has an elevator and accessible lodging. The Collector Luxury Inn & Gardens is another more intimate option.

Don't miss the food and seriously crafted cocktails at Ice Plant, a 1920s factory converted into a distillery. Other dining favorites include Casa Maya, Preserved Restaurant, Gaufre's & Goods, Scarlett O'Hara's, and The Floridian in town. At the beach try Cap's on the Water or Beaches across the Vilano Causeway. St. George Street is shopaholic central. Stroll the pedestrian end for touristy shops and the opposite end for galleries like Lost Art, Sea Spirits, and Grand Bohemian. 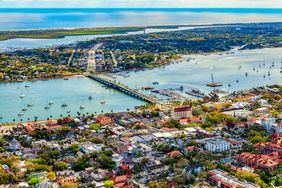