The college is located in Lakeland, Florida.

Frank Lloyd Wright-designed buildings can be found throughout the South, and the region is also home to the largest single-site collection of Wright architecture anywhere. A large portion of the buildings on the campus of Florida Southern College are Wright's distinctive designs. Located in the small Central Florida town of Lakeland, the campus has 13 Wright-designed buildings, including the Thad Buckner Building, Danforth Chapel, Annie Pfeiffer Chapel, and a Usonian house.

In the 1930s, the president of Florida Southern College approached Wright, who had just completed Fallingwater, one of his most well-known structures. When asked to design the buildings on the Florida campus, Wright agreed. They broke ground in 1938 on the first of the designs, the Annie Pfeiffer Chapel, which was completed in the 1940s. Construction of the Wright structures was completed in the 1950s and other buildings were added after Wright's death.

Today, the campus provides guided and self-guided tours of the Wright architecture. Additionally, according to Florida Southern College, "The Sharp Family Tourism and Education Center provides a home for the permanent display of photographs, furniture, and drawings depicting Wright's relationship with the College. The Center also acts as a home for visiting exhibits on loan from various other Wright sites."

You can learn more about the Frank Lloyd Wright buildings at Florida Southern College at flsouthern.edu. The college also sells a variety of Wright-themed merchandise in their online shop, including a Fallingwater puzzle.

WATCH: What Is a Sleeping Porch?

Have you ever visited Florida Southern College? What Frank Lloyd Wright-designed buildings have you seen in person?

The Greatest Day Trips To Take In Every Southern State
11 Things to Do in Pawhuska, Oklahoma 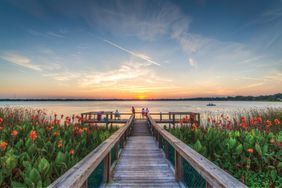