Florida has been a popular retirement destination for ages, and its showing no signs of slowing down. Retirees keep flocking to the state to enjoy its mild weather—including breezy winters—and plenty of fun in the sun, sand, and surf. The relatively low housing prices in certain corners of the state combined with the absence of a state income tax mean there are lots of reasons to retire to Florida. Whether you're looking to join a retirement community or find a house or condo in a new city, there's a Florida spot that will speak to you. Read on for info about some of our favorite Florida retirement spots, but keep in mind that the population numbers listed are based on the U.S. Census Bureau's 2019 data, so they should be treated as approximations and may be slightly different today. Ready to retire? Let's get going!

Located in Palm Beach County, this coastal town is known for its public beaches and golf clubs. There are also lots of retirement living styles to choose from, including active communities and multi-generational programming alongside the area's available condominiums and single-family homes.

Clermont might not have the name recognition of other hot retirement spots, but it's no less worthy of your attention. This small town lies just over 20 miles west of Orlando and is a suburban oasis in the center of the state. Locals love the small-town feel, restaurants, and historic downtown as well as the fact that it's surrounded by lakes, preserves, and golf clubs. Also check out Winter Garden, Florida, another great retirement spot located next door.

Delray Beach, a coastal town that has only grown in popularity in recent years, has lots to recommend it. Locals love its proximity to the Atlantic as well as the in-town offerings, such as the Pineapple Grove Arts District, Cornell Art Museum, public art, gardens, and parks for wildlife watching.

This small town on Florida's Gulf Coast is located west of Tampa and north of Clearwater. It's packed with personality and has a walkable downtown as well as a long trail system for strolls and bike rides. Caladesi Island State Park and Honeymoon Island State Park are located just across the sound.

Just west of Big Cypress National Preserve and the verdant reach of the Everglades is Naples, a South Florida town locals would like to keep to themselves, but you really should know about. It's a relaxed town with plenty of golf courses, parks, docks, shops, restaurants, and beach- and bayfront stretches for retirees to enjoy. (Plus, Marco Island and Sanibel are nearby.)

You'll find Sarasota south of Tampa and north of Fort Myers on the Gulf Coast. Art museums, aquariums, and botanical gardens are favorite features here, as is the town's lively dining and social scene. Just across Sarasota Bay on the causeway is Lido Key, which has stunning white-sand beaches and popular sunset cruises.

This town is known as the oldest in the country, but its attractions are far from old news. There's lots to do here, including marveling at the town's architecture, lounging on Atlantic beaches, exploring Anastasia State Park on Anastasia Island, and trying out all the seafood spots in town. Historic sites and wildlife sanctuaries round out the area offerings in St. Augustine.

If you love the Panhandle and don't mind summer crowds, Pensacola could be the retirement destination for you. While the high season brings lots of visitors, Pensacola can be a fun and livable spot, and it's also close to nature. It's home to a huge stretch of federally protected coastline, and its downtown has great parks, restaurants, and a historic district.

Locals tout the affordability of Port St. Lucie, a community with access to the Atlantic Ocean and lots of natural wonders, including the Port St. Lucie Botanical Gardens, Riverwalk Boardwalk, and North Fork St. Lucie Aquatic Preserve. Located between Miami and Orlando, it's a hub that was named U.S. News & World Report's third-best place to retire in the country in 2020.

Locals love Venice, a small town that puts you close to adventure. Caspersen Beach (a hotbed for sharks' teeth), Venetian Water Way Park, Oscar Scherer State Park, and walking and biking trails along the Intracoastal Waterway mean there's always fun to be had in the outdoors in Venice. 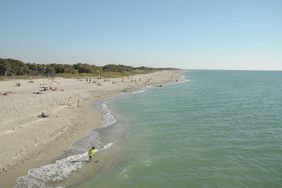