If you happen to be traveling through Florida's Gulf Coast in late April, you might want to watch out for flying fish. For the past 37 years, Perdido Key's Flora-Bama Lounge, Package and Oyster Bar has hosted an event where contestants see how far they can fling a mullet—the fish, not the haircut —across the Florida-Alabama state line.

"We have chairs that line both sides of the area where the mullet fly," Flora-Bama owner and founder of The Legendary Interstate Mullet Toss, Joe Gilchrist, told Southern Living. "But sometimes people are not paying attention, and somebody will throw a mullet and hit them upside the face. So, you have to pay attention!"

The annual tradition started in 1986 when Gilchrist was looking for ways to drum up business for his beachside bar in the off season. A friend told him about a cow chip throwing contest—that's discs of dried cow dung—that he had seen while traveling. The two friends brainstormed what their version of cow chips could be and they came up with the mullet. It's an indigenous fish that is found in abundance around the Florida panhandle.

"So, they grabbed some friends, some coolers, and some beach chairs and they walked out onto the beach and they started the Mullet Toss," Jenifer Parnell, Marketing and PR Director at Flora-Bama, told Southern Living. "Each year it's just sort of grown and grown and grown and now it's the busiest weekend of the year for us!"

The mullet are purchased from a local fish market and therefore, are already dead and ready to cook—or in this case—toss. Participants pay $15 to get their chance to hurl the slender silvery fish across a 200-foot long strip of sand.

"You can throw the fish however you want to," Parnell explained. "Some people throw it like a shot put, some people fold it in half kind of like a football." Parnell said the longest toss ever recorded was 198 feet. "He was a college track and field star, and he chucked that fish really far!"

The Mullet Toss has grown into a three-day beach party drawing around 10,000 people each day from all over the country.

"We have all age groups," Parnell said. "So literally from a little baby infant all the way up to 90 years plus."

Local TV personalities, professional athletes and musicians get in on the fun too. In addition to fish throwing, there's also live musical performances, bikini contests, and plenty of spectacular people watching.

Parnell said the Mullet Toss raises an average of $30,000 every year and that money is donated to the community's Drug & Alcohol Council as well as the Boys & Girls Club of Escambia County and Baldwin County. As for the mullet, the fish used in the contest are also donated to help feed the animals at a local zoo and the alligators at the nearby Alligator Alley.

The evolution of the Mullet Toss is perhaps even more impressive when you consider Gilchrist only had $100 in his checking account when he bought the Flora-Bama on April 17, 1978—which also happened to be his birthday. Now getting ready to celebrate his 80th trip around the sun, Gilchrist said he's just grateful for the journey and the wonderful community he's proud to be a part of.

"It just shows how with a little bit of ingenuity you can have an event that people enjoy and don't take it so seriously," said Gilchrist. "And I just think more people in the world should have fun instead of being quite so miserable."

If you're thinking of joining the tradition this year, Gilchrist just had one piece of advice, "What I usually say is, lower your standards and come on down!" 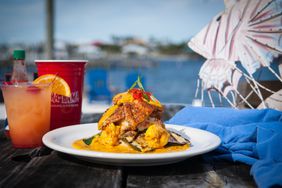 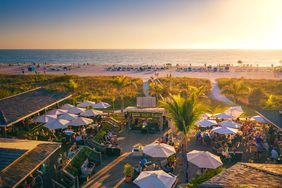 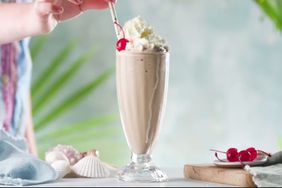 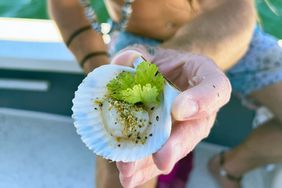