Twenty-six-year-old NFL lineman Dawuane Smoot has made some big plays over the years, but none hold a light to the one he made Tuesday morning when his wife unexpectedly went into labor in the couple's Florida home.

The fifth-year defensive end barely had time to celebrate his team's London win over the Dolphins on Sunday when he was given something even more exciting to celebrate. Smoot's wife Aumari recounted the story of that fateful morning to NFL Network's Good Morning Football.

That Monday started like any other. In fact, Aumari even had a checkup with her doctor who confirmed that she wasn't dilated. With no suspicion that she could go into labor just hours later, she went about her day.

Things took a turn around 3 on Tuesday morning when she woke up to go to the bathroom. That's when, Aumari said, her first contractions began. From that moment on, things unfolded quickly. Dawuane timed her contractions, and the two called their midwife who advised them to head to the birthing center. Aumari, Dawuane, and their two-year-old son Ahmir were headed out the door when Aumari was stopped in her tracks by her biggest contraction yet.

"I put my arms around Dawuane, and my legs basically collapsed from the pain," Aumari told Good Morning Football. "At that point, I felt my body telling me to push, so I did. I gave it one good push, felt her head, looked at Dawuane and said, 'She's here.'"

Ten seconds later, Dawuane said, she came flying out into his arms.

"My only thing was just catch Aumari and catch the baby and just make sure everyone was OK."

In such an intense moment, Dawuane said it was his wife Aumari who kept him calm enough to call 911 and follow their instructions for using a shoestring to tie the umbilical cord.

"Seeing you collapse on the floor while walking out the door to the hospital was the scariest moment of my life," Dawuane wrote in an Instagram post. "But seeing your strength to stay calm and not panic allowed me to realize everything was going to be okay. God had our back."

Today, the family of four, including newest member Ahlani Moon, are happy, healthy, and recovering at home where it all started.

All in favor of Dawuane Smoot for Most Valuable Dad! 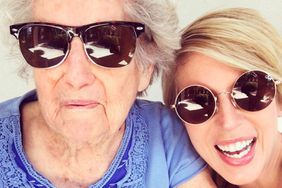