You'd be insulted—and argue otherwise—if someone claimed every Southern state is exactly alike, right? Well, we're here to mount a similar defense of the East Coast. The region tends to get lumped together, as if 2,000 miles of Atlantic coastline only contains a single landscape or beachgoing culture. But the truth is, the eastern seaboard is as varied as the people that make it up. Which means you're only cheating yourself if you declare, "Seen one beach, seen 'em all." From Maine to Florida, we've put a pin in the can't-miss stretches of East Coast shoreline. With everything from sea turtles to powdery sand to dunes that'll leave you breathless, these 14 spots prove that every beach has its own identity.

As the largest shoreline park in Connecticut, this stunning locale has attracted visitors since its official opening in 1920—and we understand its appeal: With everything from swimming and beach-strolling to boating, biking, kayaking, camping, and fishing, Hammonasset eliminates any possibility of beachfront boredom. There's even an auditory experience to enjoy: When the tide comes in at Meigs Point, the "singing beach," clinking shells create a seaside chorus.

With its gentle dunes and unbeatable views of historic lighthouses, this six-mile stretch of shoreline is a peaceful escape from the bustle of other Delaware beaches. Borrow a free bike for two hours and traverse the park's varied landscape (which ranges from maritime forest to sandy shores), or head to the overlook and see if you spot any dolphins or seals.

At 24 miles long, this barrier island is the longest undeveloped stretch on the entire east coast of Florida. Nestled between the charming towns of New Smyrna Beach and Titusville, the sands of Canaveral National Seashore are a sanctuary not just for beachgoers, but for wildlife, including several endangered species. The park is specifically known as a refuge for sea turtles, which nest on its tawny shoreline.

A barrier island with five miles of powdery sands and five separate beaches, Tybee Island is considered "Savannah's Beach" because of its easy access to the thriving downtown just 20 minutes away. The wide beaches are great for fat-tire cruising or strolling, while warm waters make for fantastic swimming nearly year-round.

Although Maine is typically remembered for its rocky shores, you'll find stellar white beaches at its southern end, with Ogunquit—the native Algonquin tribe's word for "beautiful place by the sea"—as the crown jewel. The former home of an artist's colony, this New England beach extends for three gorgeous miles, with broad, pale sands. Insiders know that the middle stretch is the quietest place to sunbathe.

Wild, windy, and where horses roam free, Assateague Island National Seashore has that delightful middle-of-nowhere feel, with South Ocean Beach as its "civilized" stretch. The park has 12 miles of drivable shoreline (with a proper OSV permit) and offers superb crabbing, clamming, surf fishing, and wave riding in the steady Atlantic swell.

Hemmed in by dunes and open to the Atlantic (but with mostly gentle waves), this beach is the beginning of a 20-plus-mile-long run of unbroken coastline that Henry David Thoreau called "The Great Beach." Though the poet is known for walking what's now the Cape Cod National Seashore, this portion is also a prime spot for swimming (and is close to the quaint village of Eastham). History lovers will enjoy lazing where the Mayflower made landfall in 1620.

With 2.5 miles of beaches facing the Atlantic on one side and the Delaware Bay on the other, Cape May has sandy charm in spades. (Did we mention the town is packed with intricate Victorian homes?) One among several terrific city beaches here, The Cove—with its gentle slope and steady swell—is chief among the treasures and beloved by families and surfers alike.

Who says New Hampshire doesn't have beach bonafides? Although its shore is the shortest of any coastal state—only 13 miles long—you won't want to bypass Hampton Beach. Think wide beaches, sweeping Atlantic views, and family-friendly amusements along the boardwalk. It's laid-back and known for being clean.

Even celebrities can't resist hitting this gorgeous, broad beach in the Hamptons. And who can blame them? One of five beaches owned by the Village of East Hampton, Main Beach is impeccably clean (in and out of the water!) and has luxuriously soft sands.

North Carolina is blessed with a bounty of extraordinary beaches, so for Ocracoke Beach to earn a spot on this list, it has to possess some serious Outer Banks magic. It's hard to beat these vacation-spot credentials: barrier-island privacy, 16 miles of undeveloped dunes and wild sands, off-road vehicle access, and top-notch seashell hunting.

You'll have to hop a ferry to reach Block Island, the teardrop-shaped isle 12 miles south of the Rhode Island coast, but it's worth the journey. Here on this stunning slice of land, known by Native Americans as "Little God's Island," lies Crescent Beach. This 2.5-mile, white-sand stretch offers family-friendly amenities (hello, cabanas!) and glorious surf. And it's just a short walk from the ferry.

A short drive from Charleston, Folly Beach is a barrier island both near to city life and millions of miles away. Funky, free-spirited, and full of surfers, sun-seekers, and quirky souls, this is off-the-beaten-path beach life in all its glory. Start your adventure at Center Beach and the Folly Pier, then head to Folly Beach County Park, at the island's west end, for a true escape. Peek at the pelican rookery while you're there.

Although officially a part of the Virginia Beach metro area, you won't catch any boardwalk-and-funnel-cake vibes at this secluded escape. Try five miles of pristine dunes and sea oats (a tall grass known for its spiky plumes) blowing in the wind. Situated alongside a serene community of beach houses and small restaurants, this spot is nothing short of an East Coast paradise. 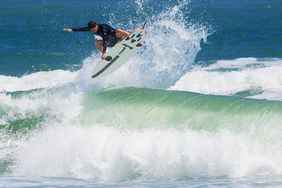