What's the Difference Between Beaufort and Beaufort?

A tale of two Beauforts

Two of our favorite Southern small towns share a name—sort of. Beaufort and Beaufort are spelled exactly the same way, which is why people mix them up all the time (much to the chagrin of the residents of each spot). However, these two towns are not the same place, and, despite the written similarity of their shared moniker, they're not pronounced the same way either. Learn the differences, and you'll never mix them up again.

A Tale of Two Beauforts

First of all, Beaufort and Beaufort are located in different states. One is Beaufort, North Carolina, the third-oldest town in the state and one of the most beloved small towns in the "Inner Banks," the inland coastal region of Eastern North Carolina (just west of the Outer Banks). It's situated between Cape Lookout and Emerald Isle.

On the other hand is Beaufort, South Carolina, another inland coastal gem located a stone's throw from St Helena Island and Parris Island, between Edisto Beach and Hilton Head Island. It's said to be the second-oldest town in South Carolina.

As mentioned, while these two towns' names are spelled identically, they don't share identical pronunciations. Beaufort, North Carolina, is pronounced "BOW-fert" or "BOH-fert." It has a similar pronunciation as the one you find in the old-fashioned name "Beauregard." It calls for the pronunciation of "beau" that we associate with the word's definition as "an admirer" or "a sweetheart."

According to the Town of Beaufort, Beaufort, North Carolina, "was first known as Fishtown because the fishing industry was and has been an important part of the county's history. Beaufort was later named for Henry Somerset, Duke of Beaufort." It's the county seat of Carteret County and has a population of approximately 4,000.

According to the Beaufort Visitor's Center, Beaufort, South Carolina, was founded in 1711. It was also named the South's Best Small Town by Southern Living readers in 2017—a charming community filled with sleepy streets, beautiful homes, and plenty of places to launch a boat or a paddleboard.

Takeaways? There are at least two Beauforts you should be aware of. They're not in the same state, and they're not pronounced the same, so there's no excuse to get them mixed up ever again.

They're two of our favorite Southern small towns—have you visited both of the Beauforts? 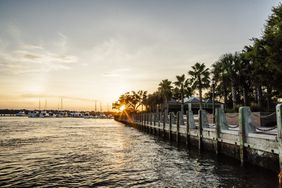