Plan for your visit with our guide to living like a local in Florence.

Northwestern Alabama is an underrated part of the state that's home to The Shoals, a community built around the Tennessee River that includes the towns of Florence, Muscle Shoals, Tuscumbia, and Sheffield. The largest of the four, with a population of about 40,000, is Florence. Named for the city in Italy, Florence, Alabama, was established in 1818 and is the county seat of Lauderdale County. Historically, Florence's location on the river and later development of its railroads got the city on the map in the shipping industry. Today, it's a growing hub for small businesses, young families and entrepreneurs, and hip restaurants and entertainment, with a convivial, slightly eclectic vibe that's welcoming to all. There's a reason they call Florence the "Renaissance City." Here are the best things to do in Florence, Alabama on your visit.

Stroll Through UNA's Campus and Nearby Streets

Filled with towering trees strung with twinkle lights and Greek Revival architecture juxtaposed with modern buildings, the University of North Alabama's beautiful 130-acre campus is the perfect place to start or end your day. Wander its pathways and stop to say hello to Leo III, the resident lion and school mascot (if you're lucky, you may even hear him roar!), and admire the limestone Harrison Fountain, imported from Italy. A few minutes' walk down the street, continue your exploration on Florence's Walnut Street and Wood Avenue Historic Districts lined with Victorian and colonial-style homes dating back to the early 20th century. Walnut Street resident and city historian Billy Warren frequently gives walking tours to reveal more about the street's rich history.

Step back into midcentury times with a tour of the Rosenbaum House, said to be one of the best examples of Frank Lloyd Wright's Usonian design. Architecture buffs will admire the clerestory windows, cantilevered roof, and extensive use of cypress wood in this restored home, which is open for tours six days a week. Named for its original occupants, Mildred and Stanley Rosenbaum contracted Wright in 1939 to build the 1,540-square-foot home, which featured an advanced-for-its-time heating system beneath concrete slab floors. About a decade later, they added an addition to accommodate their growing family, plus a Japanese garden out back. The home was entirely restored by the city in 2002 and is a fun way to spend a few hours. Families with children will enjoy the expansive back yard where they can run around.

Florence is filled with many green spaces to help residents and visitors alike connect with nature. Head to the 70-acre Deibert Park to have a picnic overlooking a pond or hit the 1.3-mile path that loops through rolling meadows and wooded areas. It also has an expansive playground for kids, including handicap-accessible swings. Wilson Park, near downtown, is home to another impressive fountain and frequent live music performances. Along the Tennessee River, you'll find McFarland Park, which has 60 campsites along with playgrounds, fishing piers, baseball fields, a soccer field, and more.

Pop into a Local Hangout

Don't be afraid to say hello to anyone you meet in downtown Florence. The locals are a friendly bunch, happy to welcome visitors and newcomers into some of their favorite hangout spots. Kick off your morning at Rivetown Coffee Co. with a house-special latte and a killer menu of made-fresh breakfast sandwiches. (You might even be welcomed into the circle of folks who gather outside in camp chairs several mornings a week for coffee and conversation.) The well-stocked Cotton Wood Farm & Grocery on Court Street offers an impressively wide selection of locally grown produce, meats, and milk plus homemade bread and all the essentials you might need without a trip across town to Publix. All the Best puts a new spin on corner store, offering refreshing beverages and snacks in addition to a mini market and records. Want to listen to one before you buy? Pop it onto the turntable in the back listening room.

Learn About the Area's Musical History

For 10 days in late July through early August every summer, the city comes together to celebrate native son and African-American composer W.C. Handy, also known as The Father of the Blues, through dozen of musical performances around the area. Year round, brush up on the rich musical history of the Shoals by visiting the W.C. Handy Home and Museum. The log cabin where was born was built in 1873, and today the next-door museum contains a library and a collection of Handy's personal papers and artifacts you can view on guided tours. A short drive across the river, stop into Fame Studios, which was established in downtown Florence in 1959 but moved to Muscle Shoals in 1960 by Rick Hall. Music royalty from Etta James and Wilson Pickett to Aretha Franklin and Jason Isbell have all recorded hit songs in this famous studio. Fame's backstage tour takes you into personal offices, instrument exhibitions, and the awards hall.

Shop Locally Made Artwork and Décor

Peruse a wonderfully curated selection of paintings, ceramics, photography, and gifts made by artists around the Shoals inside the charming corner shop Stella & Goose (named after the owners' beloved pups) in downtown Florence, which also hosts art classes. It's the perfect spot to pop into during First Fridays, the city's monthly social evening downtown with vendors, live music, food, and shops open late from spring through fall. Across the street a block down, home and gift store Reclaimed Spirit is another fun spot to shop Shoals merchandise like adorable tea towels and sweatshirts, original handcrafted candles, and chic home décor. Founder, artist, and beloved local Stacey Hamner tragically passed away in 2021, but her spirit lives on through her family's continuation of her store, and reprints of her artwork available on journals, prints, and notecards.

Have Dinner and Drinks Downtown

Once downtown, Florence is a walkable city that enables you to park once and visit many local spots by foot. Start your night with cocktails and small plates at the bar at Odette, a lively eatery with an ever-changing menu made with sustainably raised Alabama ingredients (you can't go wrong with pimento cheese deviled eggs or whatever variety of crispy potato gnocchi is on offer). For dinner, grab a table at Yumm Thai Sushi and Beyond, which has an impressively large menu of sushi rolls, Thai cuisine, and, surprisingly, the best sweet potato fries in town. For a more casual meal, both The Pie Factory and Lost Pizza make a mean cheesy pie — and the latter has the largest patio downtown, complete with a walk-up window to the bar. End the evening at The Carriage, a sleek wine bar and bottle shop with blue velvet booths and a continuously rotating selection of wines and wine cocktails.

Check into a Boutique Hotel

While Florence has plenty of quality hotel rooms, the two most interesting properties can be found right in downtown in converted historic buildings. The GunRunner Boutique Hotel on Tennessee Street has 10 luxury suites that pay homage to the history of the Shoals: For instance, one suite is named for fashion designer Billy Reid, who's a resident of Florence, and features a clawfoot tub and an 18-foot private balcony; a room called Muscle Shoals Sound Studio features authentic memorabilia from the famous studio's rock star clientele (think Rolling Stones and Bob Dylan). Each of the suites open to a common area that serves as the GunRunner bar, a popular hangout spot. There's also a luxurious spa downstairs. On Court Street, Stricklin Hotel has 24 rooms with king beds and exposed-brick walls tucked inside the second and third floors of the historic Stricklin Building. Down below, The Boiler Room has several bowling lanes along with games like shuffleboard and Skee-ball.

Take In the Beauty of the Tennessee River

You'll often see icons of bridges representing The Shoals, for good reason: The residents here love to take advantage of all the water has to offer. Fishing for crappie and bass is a popular pastime on the Tennessee River, along with three lakes—Pickwick, Wilson, and Wheeler—created through a series of dams. Many top fishing tournaments are held around Florence in springtime. Venture into sloughs via kayak or boat in summertime or go for a swim in the lakes. Be sure to spot the unique cypress trees growing in the water, with roots that protrude upward. Don't want to go out on the water? You can still appreciate its beauty by taking a hike on one of Tennessee Valley Authority's many hiking trails, several of which overlook the river. 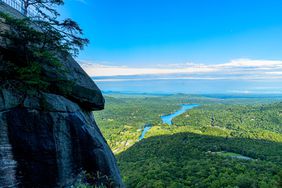 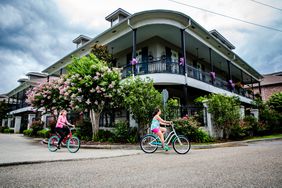