Alabama's “Almost Twins” are inspiring folks across the country with their unique bond and incredible story of friendship.

From the moment they met, Anna Moates and Anna Penland's similarities have been undeniable. Not only do they have the same name, but they also have the same hair color, are the same height, and often finish each other sentences. They both attended Auburn University and love baking, singing, and dancing.

"We really are like sisters," Penland told Southern Living. "We think the same thing so often, there's no way we couldn't call each other twin."

Despite their many similarities, the girls have one key difference. Anna Moates has Down syndrome, while Anna Penland does not. While many would see that difference as an obstacle to friendship, both Annas see it as something to celebrate.

"Most people like to celebrate that people are 'all the same'" Penland said. "But that really isn't true—which is why we decided to start going by The Almost Twins. The 'almost' signifies the beautiful difference in not only someone with Down syndrome and their typical peers, but each and every one this planet. Disability or not, we all have strengths and weaknesses that complement each other in friendship. We all have something unique to celebrate!"

Penland, who is now a first-grade teacher, met Moates in 2018 during an Invitation Day for Auburn's EAGLES program, which provides a post-secondary education for students with intellectual disabilities. Penland was volunteering with the program, and Moates was on her way to becoming one of its first three participants, as well as Auburn University's first-ever student with Down syndrome.

The pair became fast friends, and then quickly transitioned into becoming twin-level BFFs. When Penland took a children's literature class in the fall of 2019 and learned how underrepresented people with disabilities are in kids' books, she immediately thought of her best friend Anna. After some thinking, she came to Moates with a proposition.

For the next year and a half, the pair met every Wednesday to work on their book. They made a list of everything they wanted readers to know about Down syndrome, as well as a list of each of their strengths and weaknesses. They then wove it all into the uplifting story of their own friendship.

Since its release in August, Almost Twins: A Story of Friendship and Inclusion has sold more than 1,500 copies across the U.S. The girls have had a whirlwind journey filled with book signings, readings, and kids' events hosted all over the Southeast. Penland said the most rewarding thing about doing events has been seeing the impact the book has had on others—especially those with Down syndrome.

"The children who have Down syndrome that come to our visits love seeing themselves so physically in a book," she said. "They get so excited to feel celebrated and noticed. At almost every signing, we've been reminded that awareness equals acceptance and representation matters. The more word we spread about this topic, the more comfortable it is."

Through it all, both Annas agree that there's no one else they'd rather be on the journey to spread awareness with than each other.

"People have been so supportive, and we are very thankful," Moates said. "I would like to continue to spread awareness about inclusion and friendship and Down syndrome and other disabilities! Writing this book has fulfilled a dream of mine to be an author and it means so much to me!"

Almost Twins is sold at Barnes and Noble, Books-A-Million, Target, and Amazon. Check it out here. We can't think of a better gift for a teacher friend, or a better addition to your home library! 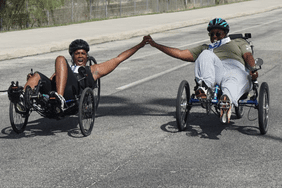