Built on football, this SEC stronghold is quickly becoming a culinary powerhouse.

Rising to the Challenge

Not so long ago, Auburn, Alabama, wasn't high on anyone's list of food cities, even though its deep agricultural roots gave it plenty of fertile ground for farm-to-table cooking. Making a change meant plowing under a student-first model, heavy on fast food, and planting seeds for a well-rounded culinary landscape. Now the community honors homegrown produce from Alabama farmers and fresh seafood from the Gulf while embracing the cuisines of international transplants who've found a home here.

The secret to Auburn's transformation can be found in the community's mantra: A rising tide lifts all boats. You will hear it repeated in conversation after conversation with the restaurateurs and chefs of Auburn's most successful enterprises.

But would that sentiment hold when push came to shove? The push came in 2020, when COVID-19 forced temporary closures, but the reaction from the restaurant community was far from a shove. Instead of jockeying for position amid a dwindling audience, owners banded together, sharing their survival strategies and organizing meals for health-care workers.

That spirit of togetherness has allowed Auburn to triple its number of restaurants and add several chefs with local ties to the list of James Beard Award nominees and semifinalists. Yes, you will still find your fair share of chicken-tender joints, but you're just as likely to discover slow-simmered pho, Texas-style brisket, and hand-stuffed bao. With Auburn University debuting a multidisciplinary, world-class culinary school in the fall of 2022, no doubt the best is yet to come.

It's impossible to tell the story of Auburn food without David Bancroft. In 2004 as a college senior, he dipped his toe into the culinary arts as a prep cook at Amsterdam Cafe. A little over a year later, he dove in completely and became the restaurant's executive chef. Over the next six years, he breathed new life into the restaurant, introducing the creative farm-to-table cuisine that he's known for today. Locals came out in droves for his specials featuring ostrich and emu paired with fresh produce he planted just outside the restaurant's back doors. Prior to Bancroft's tenure at Amsterdam Cafe, it had also served as an incubator for future James Beard Award alums and Birmingham chefs Rob McDaniel (Helen) and Adam Evans (Automatic Seafood and Oysters).

By the time Bancroft, now a four-time James Beard Award semifinalist and Iron Chef Showdown winner, opened Acre on an acre of land in the historic downtown section of the city, the community was ready for the revolution he brought with instant classics like chicken-fried bacon and spiced Gulf red snapper served with apple-radish-fennel slaw and collard green spaetzle.

With its commitment to local purveyors, an impressive in-house charcuterie program, and a genetic clone of a Toomer's Corner oak tree planted out front, Acre is about as Auburn as it gets. Melding innovation with tradition, it's a microcosm of the greater Auburn-Opelika food community, where the nostalgia of fresh-squeezed lemonade, soft serve, and chili dogs from Toomer's Drugs and Mrs. Story's Dairy Bar coexists with contemporary fine dining and fast-casual fusion.

The New Outpaces the Old

If she's a fan of Bancroft, the admiration is mutual. He contends that Lucy's offers the "best brunch on the face of the earth," admitting that even his kids prefer Lucy's giant pancakes to his own. 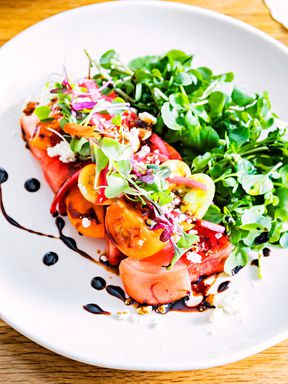 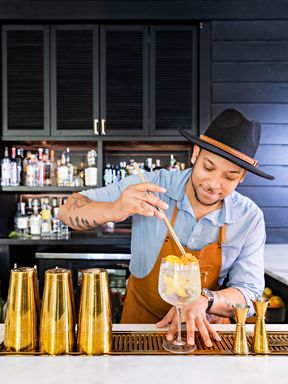 Van der Reijden remembers a time when she and her husband, Hans—another key player in Auburn's culinary scene—regularly drove to Montgomery for espresso because there was none to be found in town. Now Lucy's serves a house roast locally sourced from Mama Mocha's Coffee Roastery.

Joining Lucy's among the next generation of Auburn favorites is The Depot, a train station turned seafood brasserie that serves everything from briny oysters to buttery Maine lobster, and its landlocked counterpart The Hound, with its lodge-style dining room where bacon and bourbon rule. Order the Pail-O-Pork Rinds or their famous meatloaf made with two types of bacon.

Some other new spots to check out include Bow & Arrow (a second venture from Bancroft with a large menu that's inspired by the fusion cultures of his South Texas childhood) and Hawaiian-born chef Torrey Hall's Sword + Skillet, an upscale coastal food truck. 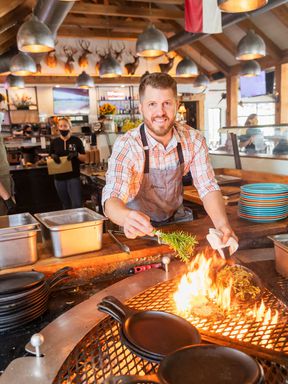 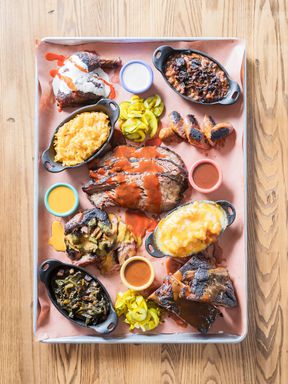 There are far fewer than six degrees of separation among the members of Auburn's food family. Hall's wife is a first cousin to Whitley Dykes. Dykes and his wife, Kunyu Li, own The Irritable Bao, a Chinese dumpling-and-bao restaurant that swiftly achieved legendary status.

The Irritable Bao started as the food truck Dumps Like a Truck in 2017. Dykes and Li, who met and married in Li's native China, initially opened the truck attempting to create a sense of home for the international-student population Dykes worked with at Auburn Global (a university program aimed at helping ease the transition for students from abroad). The couple quickly realized that their pillow-like bao and tongue-in-cheek puns had much wider appeal.

"The fact that the lines went down the street—that was mind-blowing," Dykes says. "I never anticipated that, and now it's so customary that when it doesn't happen, I'm like 'Where is everyone?' "

Dykes credits much of The Irritable Bao's success to support from the area's restaurant community. Taqueria Durango, a street-style taco truck, kicked off the kindness by sharing their commissary kitchen with the newly opened truck. Then the Bancrofts came knocking.

"David and his wife, Christin, reached out to us and asked if we wanted to park outside their restaurant to serve our food on a day when they weren't even open," Dykes remembers. "They let our customers come into their restaurant and eat, and then they had their staff bus and clean everything. The level of kindness and humility that took was pretty special."

As The Irritable Bao grows its dedicated following with favorites like the Buffalo chicken bao and pork-and-cabbage wontons in homemade chili oil, they have committed to carrying the torch of camaraderie that Dykes says Bancroft lit so many years ago.

Case in point: The Irritable Bao's "collabaorations" feature a variety of bao fillings from other local eateries like chicken tikka masala from Good Karma and Bolognese from Ariccia Cucina Italiana, an Italian place where you can order the Porchetta di Ariccia. Former chef Miguel Figueroa traveled all the way to porchetta's birthplace—the town in Italy for which the restaurant is named—to learn the secrets of the slow-roasted pork dish. His version is one of the Alabama Tourism Department's "100 Dishes to Eat in Alabama." Now Ariccia Cucina Italiana is helmed by chef Marc Osier and continues to turn out fantastic Italian cuisine. 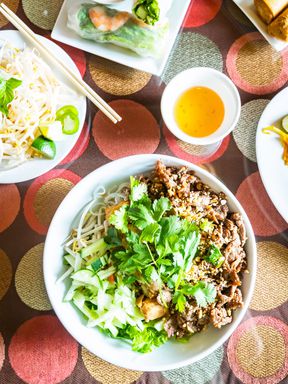 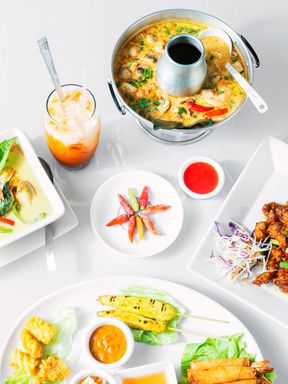 To complete the Auburn restaurant tour, stop by Pho Lee for Vietnamese cuisine. Then visit chef Phounsavan Malavong at Savanh Thai Kitchen to try her drunken noodles and Prik Pao.

In the symbiotic relationship between college and city, Auburn University's Hospitality Management Program stands out. When the Tony & Libba Rane Culinary Science Center opens next fall, it will represent both the literal and figurative intersection of campus and community. Continuing the university's long-standing relationship with Ithaka Hospitality Partners, the management group behind The Hotel at Auburn University, the Rane Center takes the hands-on teaching model at the hotel and kicks it up a few hundred notches.

More than 12 years ago, Ithaka CEO Hans van der Reijden launched this landmark project with discovery visits to some of the world's top culinary programs. "We saw excellence [everywhere] but only in one singular lane," he explains. "What we [did] was take all of these individual components and build a program where we could get everything that touches hospitality but do it at the highest level."

The 142,000-square-foot complex will house a luxury boutique hotel offering an open-to-the-public spa and rooftop bar. Also under its umbrella will be a coffee roastery and cafe, along with a microbrewery and tasting room, laboratories focused on distilled spirits and wine appreciation, a culinary-exhibition laboratory, media studio, and food hall. Its crowning glory will be 1856, a teaching restaurant set to feature a new dining concept each year from a nationally acclaimed chef in residence.

A real game changer for students, the new center will also serve the Auburn neighborhood at large. Locals and visitors will have access to the food hall's 8 to 10 concepts, including one serving Malaysian street noodles and another specializing in Western tortas. Meanwhile, 1856 will offer an affordable high-end tasting menu, and the center will host public cooking classes.

Van der Reijden says culinary centers inherently accelerate restaurant scenes both by attracting talent and building excitement for food. However, the real magic happens years later. "You'll start seeing graduates fly out, make names for themselves and then return home to open restaurants. You bring the world to them, and then they can, in turn, bring it back to Auburn," he says.