This year, a new name ended up in the top spot of our annual crowdsourced survey.

As barbecue restaurants go, 4 Rivers Smokehouse is something of an upstart. The business is just over a decade old, and its offerings cut across regional styles and challenge traditional boundaries. It’s growing fast too. Founded in 2009 in Winter Park, 4 Rivers has now expanded to 13 locations in Florida, with plans for more.

Founder John Rivers made his way to the pits via an unusual route. After retiring as the president of a billion-dollar company, he started smoking meats as a hobby. Then in 2004, he staged a fund-raising cookout for a local girl who was battling cancer. Soon he was smoking thousands of pounds of meat out of his garage, having created a “barbecue ministry” to raise funds for schools, churches, and civic organizations.

Just five years later, he opened the first 4 Rivers restaurant in a former mechanic’s shop in Winter Park. Taking its name from the four members of the Rivers family (John, his wife, and their two children), it was an immediate hit. A second location in Winter Garden soon followed, and they haven’t looked back.

Rivers says his goal is “de-regionalizing” barbecue, and the restaurants do just that. From the paper-lined metal trays to the smoked sausage links, there is a Texas vibe here. But South Carolina-style mustard sauce is ordered alongside the restaurant’s signature tangy red version and burnt ends—a Kansas City staple—are a menu fixture.

This place is well known for its slow-smoked brisket, but for me the best bet is the Santa Maria tri-tip—a specialty that’s popular in California. With a crisp brown crust outside and a rosy pink middle, each slice delivers a delicious beefy bite.

Hearty appetites will be drawn to all the over-the- top creations like the Six Shooter, a slab of baked cheese grits piled high with pulled pork, slaw, jalapeños, and sweet barbecue sauce. But with pulled pork, ribs, chicken, turkey, and more on the menu, you will find something for everybody.

While they’ve long had veggie items like quesadillas, last year they added Beyond Burnt Ends sandwiches and platters, made with a plant- based meat alternative that’s smoked and then roasted in vegan barbecue sauce.

The barbecue operation has spun off several beloved side businesses, including Southern-themed restaurant The Coop, The Sweet Shop bakery, and the 4 Rivers Cantina Barbacoa Food Truck (Mexican-barbecue fusion). They operate con- cession stands at ESPN’s Wide World of Sports Complex and three football stadiums around Florida, with plans to expand.

That means even more barbecue fans will have a chance to sample all the innovative offerings that made 4 Rivers our 2020 readers’ pick for the best in the South. 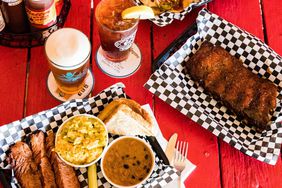