The South's Best Small Towns in Every State

Nobody knows your home state as well as you do. If we asked you to name the best barbecue joint, the best hotel, the best B&B, swanky restaurant, bar, boutique, or just about anything else in your state, you'd likely have a strong opinion and a ready answer. The best small towns in each state are stand-outs for all kinds of reasons. From hotbeds of Southern food and literature to centuries-old villages that look like something out of a storybook, these towns reflect the history and character of their particular spot on the map. Experience German culture in Texas, Navy pride in Maryland, Native American folkways in Arkansas, and Colonial American history in Virginia. From our coasts to our mountains, our small towns reflect the personality and passions of the people who live there. Each one is unique to its state—and each one has all kinds of Instagram potential, so get ready for some memorable selfies.

Wiry trees draped with Spanish moss frame pastel-painted bungalows in this small Alabama town. Once you watch a sunset from the Tiki Bar at the American Legion Post 199, you'll understand Fairhope nostalgia, and wonder why anybody would want to live anywhere else. Read more.

Native Americans came here for the healing waters of this area's mineral springs. Modern-day travelers still come to Hot Springs for a soak or a spa treatment on historic Bath House Row, now part of a National Park that wraps around the north end of town.

First settled by the Dutch in 1631, Lewes has all the storybook charm you would expect from a small waterfront town that's closing in on its 400th birthday. It perches on the spot where the Delaware Bay meets the Atlantic Ocean, giving it both bayside and oceanfront beaches.

It might be the Ancient City, but it's not a forgotten one. Founded by the Spanish in 1565, St. Augustine is an architectural gem on Florida's Atlantic Coast, roughly midway between Jacksonville and Daytona Beach. Read more.

While its annual Oktoberfest brings visitors flocking in the fall, and Christmas attracts crowds during the holidays, there are plenty of reasons to plan a stay in this German town nestled among the Blue Ridge Mountains and Chattahoochee River all year long. Read more.

Kentucky's second-oldest city and the "Bourbon Capital of the World," Bardstown sits at the head of the Kentucky Bourbon Trail. It's home to six great distilleries. Plus, plenty of charming bed-and-breakfasts ensure that you'll have a lovely place to rest your head after a long day of gallery hopping and bourbon sipping. Read more.

Natchitoches is a small town with a deep soul, one that holds tight to its homegrowns and opens its arms wide to outsiders. Stroll Front Street, the town main drag, where you'll find hand-made soaps at Boathouse Soapery & Caldarium and everything else at Kaffie-Frederick General Mercantile, Louisiana's oldest general store.

Don't miss Maryland Avenue, once the toniest residential addresses in town, where you can see beautiful examples of colonial architecture and enjoy an eclectic mix of shops and restaurants just a stroll from the U.S. Naval Academy.

*Southern Living Hotel Collection Member: The Inn at the Chesapeake Bay Beach Club & Spa is an easy drive and a couple of bridge hops away on Kent Island.

For a small Southern town, Oxford can claim some impressive residents, past and present: Ole Miss, William Faulkner, the legendary Square Books, and equally legendary restaurants by the likes of chef John Currence and restaurateur Emily Blount. It's one college town that's worth a visit (even if your kids won't matriculate for at least a decade). Read more.

So many tourists come to Branson's 76 Country Boulevard—famously lined with theaters—that it's easy to forget this is a small town, population still shy of 12,000. Branson occupies a gorgeous spot in the Ozarks, with the White River, Table Rock Lake, and Lake Taneycomo offering outdoor entertainment.

Planted on the outermost reach of North Carolina's southern coast, Beaufort feels like a step back in time. It's a community full of hospitality that bands together when the going gets tough: Just weeks after Hurricane Florence walloped Beaufort last September, it had all but bounced back to its old self. Read more.

The home of Oklahoma State University helped launch the career of its world-famous graduate, Garth Brooks. He got his start playing at Willie's Saloon and other watering holes along a stretch of Washington Street known as The Strip. Stillwater is the epicenter of "Red Dirt" music, an Oklahoma-Texas-bred blend of rock, blues, country, bluegrass—hard to define but definitely worth a listen.

It could be said that Beaufort has it all. Beauty, check; scenery, check; history, check; charm, check and double-check. There are some bonus points, too: cultural events, water activities, unique festivals, and fine eating joints featuring local seafood. Read more.

Nestled against the Great Smoky Mountains National Park, Gatlinburg offers a charming gateway to those majestic mountains and packs more entertainment into its slice of the Blue Ridge Parkway than you can shake a hiking stick at. Read more.

With its blend of Texas-German culture, historic store fronts, locally owned shops and restaurants, and prime location among the wineries of the Texas Hill Country, Fredericksburg is a shoo-in for any list of great small towns. Read more.

The Monongahela River lies west of Morgantown, with Cheat Lake and the Cheat River to the east. Add mountains for hiking, and you have a haven for outdoor adventurers. Morgantown is also home to West Virginia University. 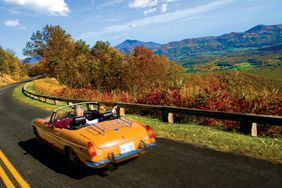