This year our readers' picks for the South's Best BBQ Joints brought a few surprises. Four restaurants that missed the cut in 2019 made it onto the list this time around, and for the first time since 2017 there's a new name in the top slot. Barbecue fans may quibble with the order or protest an omission or two—we would expect nothing less!—but taken as a whole, it's a solid sampler of top-notch barbecue, and one that's bound to make you hungry.

Fifteen miles east of Biloxi is a sprawling compound with a gravel parking lot and a jumble of tin-roofed wooden buildings. Welcome to The Shed, where hungry barbecue fans sit at long picnic tables and wolf down platters of ribs, brisket, and pulled pork. Slow smoked meats accompanied by live blues music and cold beer have made the Shed a Mississippi barbecue destination.

Traditional wood-cooked barbecue meets fine dining technique at this South Carolina favorite. Pork butts, ribs, brisket, and chicken are slow-smoked on Lang and Oyler pits and served on traditional platters with housemade pickles. They're incorporated into a range of creative dishes, too, like pit-cooked pastrami sandwiches and ramen with smoked shrimp. Home Team's smoked chicken wings, topped with tangy white sauce, are some of the best anywhere.

Buxton Hall wows diners with traditional wood-cooked whole hog, "chef-driven, grandma-inspired" sides, and homemade cakes and pies. The setting—a 1930s-era building that once housed a roller-skating rink—is one of a kind, and so are the smoky fried catfish and the green beans cooked "below the pig" so they catch all the drippings.

Since 2002, Central BBQ has been pleasing the crowds in Memphis with everything from pulled pork and chicken to brisket and turkey, but big racks of Memphis-style ribs, slow-smoked over hickory and pecan, remain the main attraction. Now Central BBQ has headed up the road and added a new Nashville outpost, too.

Texas natives Jonathan and Justin Fox brought slow-smoked brisket and a whole lot more to Atlanta. Their hickory-smoked chicken wings are standouts, and there are plenty of foxy creations that span the South's regional styles, like chopped brisket-laced "Texas fries" and chicken-fried ribs with Alabama white sauce. You won't leave hungry.

Founded in 1962, Lexington Barbecue is an iconic practitioner of the Piedmont North Carolina style. That means pork shoulders cooked over oak and hickory coals on closed brick pits and chopped or sliced before serving. Dressed in founder Wayne Monk's signature "dip"—a vinegar-based sauce with a touch of ketchup—and accompanied by cool red-tinged slaw and crisp hushpuppies, it's as good as North Carolina barbecue gets.

Ribs and sausage are the name of the game at Dreamland. Cooked hot and fast over hickory coals, those long, thin ribs long have a wonderfully chewy texture and crisp bits of char around the edges. Dreamland now has ten locations in three states, but the original in Tuscaloosa is a true Alabama classic.

A mile off the beach on St. Simons Island, Harrison Sapp and Griffin Buffkin have transformed an old gas station into a laid-back barbecue oasis. Order a big platter of brisket, chicken, and honey-glazed ribs and feast at one of the long picnic tables on the bustling patio. Don't forget the Brunswick stew—it's some of the best in Georgia, and one of the many reasons why Southern Soul is a perennial reader favorite.

Wiley McCrary parlayed a successful run on the competition barbecue circuit into a popular Savannah restaurant. His pits turn out pulled pork, chicken, and brisket, and fans rave about the "Redneck Nachos"—housemade potato chips loaded up with pulled pork, gooey cheese, jalapenos, and tangy barbecue sauce.

In just a decade, 4 Rivers Smokehouse has grown from a single restaurant in Winter Park into a 15-location Florida barbecue empire. Now it's our readers' pick for the best barbecue joint in the South. Slow-smoked brisket anchors a broad menu that covers everything from Memphis-style pulled pork to California tri-tip. 4Rivers recently added plant-based "Beyond Burnt Ends," too. 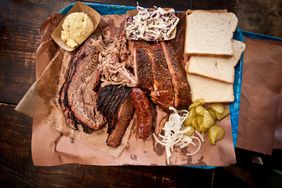 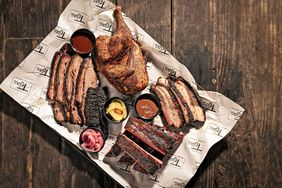