Unlike our gooey peach cobbler, festive bourbon balls, and classic caramel cake, buttermilk pie is an old-fashioned Southern dessert that doesn't quite get the attention it deserves. With a simple ingredient list, a fantastic history, and an irresistible flavor, you'll want to add buttermilk pie to your table the next time you host company.

There's never been a better time to learn how to make our Classic Southern Buttermilk Pie, one of our favorite forgotten pies of the South.

What Is Buttermilk Pie?

Light and silky smooth, this creamy custard-based pie hails from an era of "desperation pies" (also known as "make-do pies"). As penny-pinchers and rationers during the Depression and World War II, Southern women worked with what they had, making pies with common ingredients like vinegar and green tomatoes instead of citrus fruit or crisp apples. These vintage pies feature simple but hard-working fillings, with a mixture of pantry staples taking the lead.

While some confuse buttermilk pie with chess pie and custard pie, each has a distinct personality, and this buttermilk pie recipe proves it. Chess pie typically includes either vinegar or cornmeal in the filling, often both, while custard pie skips the buttermilk altogether and often opts for a dash of nutmeg. In contrast, buttermilk pie gets its signature tangy flavor from buttermilk, a splash of lemon juice, and a hint of vanilla.

Sweet and slightly tangy, buttermilk pie is loved for its simplicity. The filling has a creamy and smooth texture, comparable to crème brûlée. The combination of flaky pie crust with rich, custardy filling is an instant winner. Lemon zest and vanilla extract make up the predominant flavors.

Custard-based pies can be especially finicky, sensitive to humidity, temperature, and cook time. Even the most experienced bakers have had to navigate pies that run, don't set correctly, or burn. Here's how to handle those issues:

Why is the pie not set?

Never, ever cut into a hot pie. Pies continue cooking after being removed from the oven, helping the interior set. Buttermilk pie should sit at least two hours before being sliced. Ensure the exterior of the pie is cool to the touch before digging in.

How to tell when it's done

Remove the pie from the oven when most of the filling is solid, with only a bit of wiggle in the middle. The filling should not be liquid when removed from the oven. You can also test doneness by sticking a wooden toothpick, which should come out cleanly.

If you notice your pie crust or pie filling begins to darken, wrap tin foil over the top of the pie to prevent burnt bits.

How to Store Southern Buttermilk Pie

Buttermilk pie should be kept in the fridge in an airtight container to prevent spoilage and is best for three to four days after baking. Freeze any leftover buttermilk pie by tightly sealing it in an airtight zip-top bag or container. Pies stored in the freezer are best kept for two months.

To defrost, place in the refrigerator overnight. Reheat leftover pie in the oven at 325 degrees F to warm. 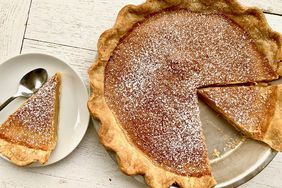 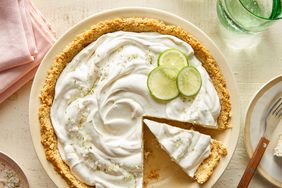 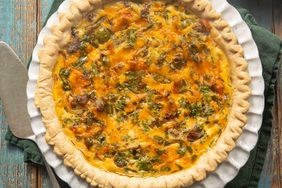 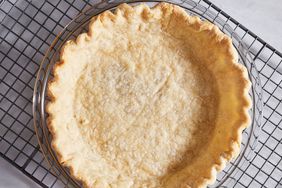 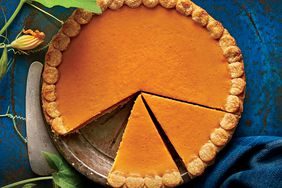