A big batch of this comforting Creole classic comes together in about an hour.

The beloved Creole rice dish that we know today as jambalaya has a list of variations that's as long as its history: The dish dates back to early 18th century Southern Louisiana, when Spanish settlers adapted paella using local ingredients.

At its core, jambalaya is a one-pot rice dish usually made with smoked sausage, onion, celery, green peppers, and Creole seasonings. But depending on which Southern cook you ask, it might also include tomatoes, a roux, and a huge array of proteins—including chicken, smoked ham or turkey, fresh oysters or shrimp, or different kinds of sausage.

This jambalaya recipe calls for the classic combination of chicken thighs and smoked sausage. When simmered with the rice, vegetables, herbs, and spices, they impart deep flavor to this hearty, soul-satisfying dish. And since it all comes together in about an hour, you don't have to wait for a special occasion like Mardi Gras or a tailgating party to cook up a batch. This two-step recipe is easy enough to get on the dinner table even on a busy weeknight, and makes for delicious leftovers.

Is Jambalaya Creole or Cajun?

There are actually two types of jambalaya: Creole and Cajun. Creole versions, like this one, are made with tomatoes. That's why you may hear it called "red jambalaya."

Cajun-style jambalaya (AKA "brown jambalaya") does not call for tomatoes. It's usually thickened with a brown roux that gives the broth its color.

What Is the Difference Between Gumbo and Jambalaya?

There are a lot of similarities between these two classic Louisiana stews, including the types of spices, vegetables, meats, and seafood that are commonly used.

Both of them also call for rice, but the key difference between the two is how it's used. Jambalaya is a rice dish: the grains get added directly to the pot. With gumbo, on the other hand, rice is an accompaniment. The grains are cooked separately, and the gumbo is served overtop.

The other major difference between the two dishes is that base of any traditional gumbo recipe is a roux—a time-consuming and laborious step that can't be skipped if you want real-deal gumbo flavor. One major perk of opting to make a big pot of jambalaya over gumbo is that it delivers the same flavors and warming comfort without the constant whisking required to make a proper roux.

The medley of budget-friendly chicken thighs, smoked sausage, fire-roasted tomatoes, rice, and the "holy trinity" of diced onion, bell pepper, and celery give this one-pot wonder its bold and lively flavor. They're simmered until tender in a broth of chicken stock flavored with spicy Creole seasoning, garlic, bay leaves, thyme, and oregano. (Canned fire-roasted tomatoes add smoky, charred taste to this dish. But if you can't find them at the grocery store, just swap in standard canned diced tomatoes.)

How to Make Jambalaya

This one-pot meal comes together in just two steps, so you can have dinner on the table in under an hour.

Over medium-high, heat the canola oil in a Dutch oven or other heavy-bottomed pot.

Add the chicken and sausage pieces and stir frequently until the meat is browned on all sides, about 8 to 10 minutes.

Then, using a slotted spoon so the rendered fat drips back into the pan, transfer the meat to paper towels to drain. But don't dump those delicious drippings! They'll make a flavorful oil for sauteeing the veggies, rice, and other ingredients in the next step.

To the pot of hot drippings, add the onion, bell pepper, celery, garlic, bay leaves, Creole seasoning, thyme, and oregano. Cook over medium-high heat until vegetables are tender, about 5 to 7 minutes.

Next, add the rice and stir frequently until fragrant, about 3 minutes. Much like when making risotto, toasting the rice for a few minutes with the oil and other ingredients will allow the grains to de-clump and soak up the flavors, which creates the best texture and taste.

Add the reserved chicken and sausage back to the pot along with the broth and tomatoes and stir. Turn the heat up to high until the mixture starts to boil.

Then, cover the pot and reduce the heat to medium. Simmer the mixture, stirring occasionally, until the rice is tender. About 20 minutes should do it, but be sure to test some rice for doneness before removing the pot from the heat.

How to Serve Jambalaya

Immediately divvy your pot of hot jambalaya into individual bowls, or serve it at the table family-style in a large serving dish.

Top it with fresh sliced green onions, chives, or chopped parsley. If you'd like, add hot sauce and a loaf of warm, crusty bread.

How to Store Jambalaya

A big batch of jambalaya makes for delicious leftovers. To store it, transfer it to an airtight container and cool it completely. It will keep in the refrigerator for up to four days, or in the freezer for up to six months.

How to Reheat Jambalaya

The best way to reheat jambalaya without losing its texture is to gently reheat it in a skillet or pot over the stovetop with a little water or chicken stock to prevent it from drying out.

For a quicker method, place it in a microwave-safe dish covered with a wet paper towel and cook until just heated through.

Reviewer Laura Wright gave this recipe five stars, saying: "This is an all time fave with my family! Great with thighs, but can also use breasts just the same. To make it even better, add some uncooked shrimp (about 1/2 pound) during the last 5 minutes of simmering. Love it!!" 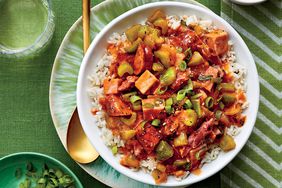 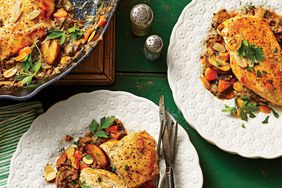 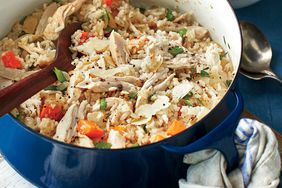