"There was not a dry eye in the chapel."

Amanda and Edwin Acevedo were planning a beach wedding when Amanda unexpectedly went into pre-term labor. When their son Oliver was born on June 14, he was 30 weeks and three days old and weighed just three pounds and 14.6 ounces.

During their time in the Neonatal Intensive Care Unit (NICU) at WakeMed Hospital in Raleigh, North Carolina, the couple revealed to a nurse that they had decided to forgo a beach ceremony and get married at a courthouse instead.

When WakeMed family navigator Mallory Magelli McKeown heard the news, she suggested that Amanda and Edwin have their wedding in the hospital chapel so that Oliver could be there. According to a hospital spokesperson, the new parents loved the idea. McKeown, who is also a chaplain, offered to officiate the ceremony.

Neonatologist Dr. Stephen DeMeo cleared little Oliver's journey from the NICU to the chapel, but with one condition: that he could attend as well.

On the big day, Oliver was 37 weeks and three days and weighed nearly eight pounds. Amanda carried her son, who was wearing a suit, down the aisle as her bouquet.

In addition to Oliver's doctor, the wedding was attended by other WakeMed doctors, nurses, and nurse practitioners who have spent the past few months caring for Oliver.

"There was not a dry eye in the chapel, and the room was filled with love and celebration for Amanda, Edwin and Oliver," a hospital spokesperson tells Southern Living.

Oliver is reportedly happy and healthy and is on track to go home very soon.

"Could not have asked for a more special or memorable wedding, surrounded by family and the wonderful people taking care of my baby!" Amanda wrote on Facebook. "Thank you WakeMed Children's for letting Oliver be a part of our day and everything else you do."

Congratulations to the beautiful family! 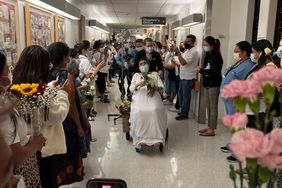 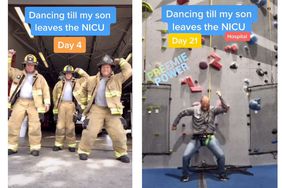