“It provides fun and vibrancy at a time when there is so much bad in the world.”

Brandi Fuller earned her undergraduate degree in English from Troy University. She has been writing for Southern Living since 2021 and enjoys writing about houseplants, birds, and art.

If you live in Birmingham, Alabama, you may have spotted a vintage white school bus parked outside of the city's most popular breweries and shops. But this bus isn't transporting people to places—instead, it's transporting plants to people.

Jessica Watts of House Plant Collective grew up tending to her mother's outdoor garden, but as she grew older she learned to love houseplants more than shrubs or flowers. Watts is currently a proud parent of over one hundred different plants in her home, although she shows a bit of favoritism toward her 8-foot tall fiddle-leaf fig and her bird of paradise, both of which have stunningly elaborate leaves.

The idea for a mobile plant shop came to her while she was hosting community plant swaps, where people met at a certain time and place to trade houseplants. "I've always had a personal passion for plants...and I enjoyed the flexibility of being able to bring plants to people." It was clear that the community enjoyed the plant swaps too, and valued being able to learn about and acquire new plants.

In September 2019, while also working full-time at the University of Alabama, she made her idea a reality by purchasing a 1995 GMC Bluebird, Model B-series school bus—but it was far from the dreamy and inviting bus you see today. The yellow school bus was in need of a paint job and quite a few repairs to make it functional, safe, and aesthetically pleasing.

All of the seats in the bus were removed to make way for shelves and rods to display the houseplants. Twinkle lights were added for extra ambiance, and the light wood flooring added a minimalistic, but cozy feel.

After a few ups and downs, the bus was finally operable by January 2020, and House Plant Collective had its first pop-up event planned for March 2020.

Unfortunately, Watts hit another major road block—just as she planned to launch her new business, the nation shut down non-essential businesses as a wave of COVID-19 began to spread across the country.

Instead of being discouraged by this, Watts quickly adapted and shifted to an online store where customers could have plants and pots safely shipped to their homes. "The plant industry has boomed in the pandemic," Watts said. As people quarantined inside their homes for weeks, many began turning to plants to bring a little bit of nature inside.

As businesses slowly began to re-open, the House Plant Collective hosted their first pop-up shop at Magic City Market in July 2020. Though Watts was excited to share her bus and plants with the community, she ensured that her customers could shop safely. "It is a small space, we have open windows, we allow one group in and out," Watts said. She can also be spotted at her pop-up shops wearing a face mask.

The botanical bus, which is typically filled with lush houseplants like pothos, fiddle-leaf figs, cacti, palms, and peperomia, received positive and encouraging responses from her customers at the event. "It provides fun and vibrancy at a time when there is so much bad in the world," she said. After spending so much time alone indoors, the bus is a "new adventure for people to step into a plant oasis."

Understandably, people have been a little too enthusiastic about caring for their new plants. "I've had to remind people to not water their plants too much during the pandemic," she said. For new plant parents, she recommends a snake plant, also known as a mother-in-law plant, which doesn't need much water or light to thrive.

Watts has hosted pop-up shops around Birmingham at Good People Brewing, Avondale Brewing, Arcadia Salon, and several markets. She has recently ventured into surrounding cities such as Huntsville and Jacksonville, and has plans to drive her plants to Tuscaloosa, Montgomery, and Florence.

And an exciting announcement for larger groups of plant-lovers—House Plant Collective will also be rooting down in a brick-and-mortar location in the Avondale neighborhood in Birmingham. The 2,000-square-foot warehouse will also feature pop-ups, and act as a venue for socially distanced plant workshops and events. She hopes to have the warehouse open to the public by this winter.

But Watts may not even stop there—she has a vision to bring the joy of plants to more people. "I would love, down the road, to have another bus in another primary location," she said.

To find out where the House Plant Collective will pop-up next and to learn more about houseplants, follow the shop on Instagram or visit their website. 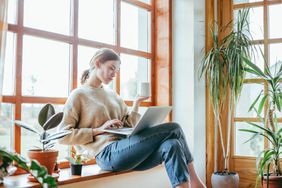