We have photographic proof! The good times are about to return to Grayton Beach.

Progress is being made on the new and improved The Red Bar. One of our favorite beach haunts will be back, and better than ever. Just a year ago, on February 13, 2019, we heard the terrible news that this most beloved Grayton Beach establishment had perished in a terrible fire. Thankfully the fire broke early in the morning when no one was inside, but while no human life was lost, the building was beyond repair. It was deemed a "total loss" by authorities.

As we reported, a mere 8 months after the flames took down the beloved bohemian beach shack and every poster, knick-knack, and quirky sign inside, owners and local officials dug shovels into sand to officially break ground on the rebuild.

In a video posted by 30A.com that day, owner Oliver Petit said that, "Memorial Day is the target date to open the place up."

In January, a photo shared on Instagram showed that the framing went up and we all rejoiced.

Now, a year out from the fire, we are getting a photographic progress report, thanks to SoWal.com's social media. A post from February 15, shows several photos of the brand-new building, construction coming right along. "We got some paint slapped on today! The Red Bar rebuild in Grayton Beach is going strong," the post reads.

On the one-year mark since the fire, The Red Bar shared a side by side comparison to show just how far they've come. "What a difference a year makes. We can't thank you enough for your support, especially Luke and Blue constructions. We miss you," their post says.

It is truly astonishing to see the progress and to know that very soon we can all make the pilgrimage back down 30A to sidle up to our favorite beach bar once again. We look forward to seeing all of our old friends and maybe making some new ones. See y'all this summer. 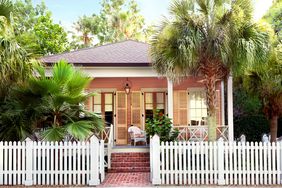 This 100-Year-Old Pink Cottage Is the Ultimate Beach Hideaway