In the past 200 years, locals say the Gray Man has appeared before each of the five hurricanes to make landfall on Pawleys Island.

If evacuation orders don't inspire you to flee the wrath of a hurricane, perhaps a shadowy figure plucked straight from Lowcountry lore will do the trick.

The legend of "the Gray Man," a translucent cloaked figure who appears on Pawleys Island, South Carolina when a massive storm is due to hit the coast, is one most Carolinians have heard. Though decidedly spooky, the Gray Man is hardly a boogeyman. Unlike other spirits of legend, this ghost serves a wholly altruistic purpose: to save lives. And according to residents of Pawleys Island, when Hurricane Florence approached in 2018, it stirred him from his slumber.

"It's a story I heard growing up," Rian Fontaine, a 23-year-old Pawleys Island resident, told Yahoo Lifestyle. "I think everyone in the low country has heard the story, especially when hurricanes or tropical storms begin to form around our area. It's always something you hear people bring up. He's a friendly entity. … Not that it's a good thing to see him, but when someone does claim to see him, it gives us locals an idea of what we're dealing with.

For superstitious locals, an appearance by the Gray Man is a good a sign as any that it's time to evacuate. It is said that those who heed his warnings will ride out the storm safely with their property undamaged.

In the past 200 years, five hurricanes have hit the shores of Pawleys Island, Yahoo reported. Hurricane Hazel in 1954 and Hurricane Hugo in 1989 claimed an estimated 119 lives between them. According to locals, the Gray Man appeared before each of the five storms.

There are a few different origin stories regarding the fabled Gray Man, many of which involve a lovesick sailor returning from sea. Others believe that he is the original owner of Pawleys Island, George Pawley, who died in the 1700s.

No matter how he got there, one thing's for sure: The Gray Man seems destined to wander the shores of Pawleys Island for eternity, keeping its residents safe along the way. 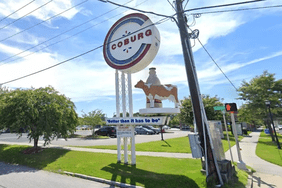 This South Carolina Dairy Cow Signals When a Storm Is Coming