At the rebooted Wilber’s Barbecue, it’s all about the pits.

In recent years, we've had to say farewell to one beloved Southern barbecue joint after another as founders retire or pass away and no one steps up to continue the business. This month, though, we have the rare opportunity to welcome back an old classic, for Wilber's, an icon of Eastern North Carolina barbecue, has reopened in Goldsboro.

Wilber's Barbecue was founded by Wilberdean Shirley in 1962, and had long been on everyone's list of the state's must-visit barbecue spots. But Wilber's hit a rocky patch a few years back, and in March 2019 the North Carolina Department of Revenue seized the business for unpaid taxes.

Wilber's closing came fast on the heels of several other notable North Carolina departures, including Allen & Son in Chapel Hill, Bill Ellis in Wilson, and Jack Cobb and Son in Farmville.

Last November, though, a group of Goldsboro natives formed Goldpit Partners LLC and bought Wilber's out of bankruptcy. They promptly began renovating the restaurant from top to bottom, and they engaged Wilber Shirley, now 90 years old, to provide continuity as an advisor.

Earlier this year I spoke with Willis Underwood, a Goldsboro insurance salesman and one of the leads of Goldpit Partners, and asked why he and his colleagues decided to get into the barbecue business.

"It really was about saving an institution," Underwood told me. "Not only [saving] Wilber's as a Goldsboro landmark but also for the state. We had a common theme of trying to save a part of North Carolina heritage."

That idea of preservation guided the renovation, which involved mostly cleaning and refreshing the building, not altering its character. "We are not going to change anything that people are used to," Underwood said. That means keeping the same knotty pine paneling and red-and-white checkered tablecloths in the dining room, and—most important of all—restoring the brick pithouse behind the restaurant.

The chimney has been freshly re-bricked and a shiny new metal ceiling installed, but not much else has changed in that pithouse. A team of Wilber's veterans, including Jackie Martin, Clarence Lewis, and Joseph Holloway, are cooking whole hogs again the same way they have for years. That means burning oak logs down to coals and shoveling them directly beneath split pigs on long open brick pits.

Wilber's reopening came a little later and in a more limited format than the new owners had hoped, thanks to the coronavirus and state-mandate dining room closures. For now, Wilber's is open Wednesday through Saturday from 11 am to 7 pm and Sunday until 3:00 pm. Service is curbside pickup only with an abbreviated menu: chopped whole hog barbecue plates and sandwiches along with barbecued chicken, potato salad, slaw, and hushpuppies.

Underwood and his partners hope to reopen the dining room "as soon as safely possible", and when they do, long-time customers should find it much as they remember. "We were careful to maintain that quintessential Wilber's look and feel," Underwood says, "and preserve all that is sacred about Wilber's."

They do plan to broaden the menu in the future, but it will remain smaller than in the old days. Wilber Shirley opened the restaurant for breakfast, and his dinner menu was a bit eclectic, with hamburger steak, fried oysters, and lasagna appearing alongside the barbecue.

The future menu, Underwood says, will remain "based on what the heart and soul of the restaurant is, which is the pit—the whole hog, chicken, and ribs off the pit, with scratch sides and seasonal vegetables."

To long-time Wilber's regulars in Goldsboro as well as barbecue fans throughout the South, that's very good news indeed. 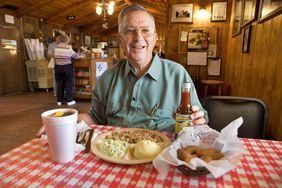