Even as the pandemic takes a devastating toll on independent restaurants across the country, Kentucky chef Edward Lee and the folks at The LEE Initiative are committed to using their resources to serve others.

When coronavirus shuttered restaurants in March, Lee and LEE Initiative co-founder Lindsey Ofcacek immediately jumped into action, opening a relief kitchen in one of his Louisville restaurants, 610 Magnolia, the very next day.

“We didn’t really know what to expect, but that first day, we served 250 people in the first hour,” Ofcacek told Southern Living in June. The next day, that number grew to nearly 400.

Recognizing that their community wasn’t the only one struggling, Lee and Ofcacek partnered with Maker’s Mark to launch the Restaurant Workers Relief Program, setting up relief kitchens in 19 restaurants across the country. By November, when we ran a story in our print issue about the extraordinary ways Lee and Ofcacek were helping restaurant workers nationwide, the program had served more than 400,000 meals.

That number has since grown again: By the first week of December, they’d collectively distributed upwards of one million meals. The program has also been able to hire more then 700 out-of-work restaurant employees to staff the relief kitchens.

And they’re not stopping there.

“Reports are indicating that roughly 8 million Americans are slipping into poverty due to this crisis. We hope the entire city will join us in proving that Louisville can be a truly compassionate city and that we can create innovative solutions to the hunger issues that have become so rampant,” notes Lee on the JCPS Family Meal webpage (donate here). “This program is more than just feeding families; it is helping families avoid facing poverty.” 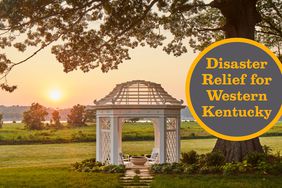