Five things you might not know about the Ohio native.

Even if you’re not a Louisiana State University football fan—or prefer to root for, say, Clemson—it’s hard not to cheer for Joe Burrow. The quarterback has helped propel his team to the championship, while living out his personal college football Cinderella story.

Despite being a star football player at his Ohio high school, even earning the state’s Mr. Football award, when Burrow first set out to play college ball, he wasn’t a top pick for the big Southeastern Conference schools. In fact, he was 298th on the ESPN 300 recruits ranking of 2015. His dream was to play for Nebraska, but they passed on him. So he signed up at Ohio State, but according to Sports Illustrated, OSU wasn’t sure they wanted him either. Current Texas head coach Tom Herman, who was at OSU at the time, knew Burrow was something special, though, but he had to persuade coach Urban Meyer to give the kid a scholarship.

While Burrow made the team, Meyer was tough on him, according to The Athletic, calling him “a Division III quarterback” and telling him, “You throw like a girl.” Burrow spent three seasons barely making it off the bench at OSU, a frustrating position for any athlete and one that made Burrow look for new opportunities. He looked at Alabama and Georgia, but eventually landed on LSU thanks to a crawfish dinner and good meeting with the coaches. A few months later, he was in Baton Rouge working with the team.

Since arriving at LSU, his rise has basically been the stuff that sports movies are made of and football fans are getting to watch it play out in real time. “I do believe he is one of the most important recruits in LSU history,” the Tigers coach declared about Burrows, according to the Atlanta Journal Constitution and, at this point, it’s hard to disagree.

Here are five things to know about the football star:

Burrow comes from a family of athletes

The reason Burrow wanted to play for Nebraska so badly, is that his brothers, Jamie Burrow and Dan Burrow played there. Plus his father, Jimmy Burrow, played there. He was a defensive back, and according to USA Today, helped the Cornhuskers defeat Florida in the 1974 Sugar Bowl. He went on to become the defensive coordinator at Ohio University.

He was raised in Ohio

Burrow grew up in the Athens, Ohio, home of Ohio University. “Growing up around people who don’t have a lot, it kind of gives you perspective,” Burrow told Bleacher Report. “It makes you want to go harder, be tougher.” His hometown is proud of Burrow’s success on the field with some fans taking a page out of the Louisiana handbook and hanging “Geaux Jeaux” signs, according to the the Washington Post.

WATCH: Texans' DeAndre Hopkins Has a Sweet Tradition With his Mom at Football Games

In 2019, Burrow has thrown for 5,208 yards and 55 touchdowns. According to 538.com, “both marks are already SEC records and rank among the top 10 at the Football Bowl Subdivision level.” Perhaps even more impressive, he has completed more than 77 percent of his throws, which is tracking to break the all-time record. Per 538, “Burrow has thrown 22 touchdowns that traveled at least 18 yards, tied for the most by any QB in a single season since at least 2011.” Impressive stuff!

He has a good sense of humor

When an opposing defensive lineman at Mississippi State accidentally pulled Burrow’s pants down leading to what The Advocate delicately called, “a brief exposure of his backside” on national television, he took it in stride. During post-game interviews, he even joked about it, telling reporters, “I hear there’s a full moon out tonight in Starkville.”

His heart is in his hometown

When Burrow made his acceptance speech after winning the 2019 Heisman Trophy, he spoke of his hometown of Athens, Ohio:

"Coming from southeast Ohio, it’s a very impoverished area and the poverty rate is almost two times the national average,'' Burrow said in his speech. "There’s so many people there that don’t have a lot and I’m up here for all those kids in Athens and Athens County that go home to not a lot of food on the table, hungry after school. You guys can be up here, too.'' According to Cleveland.com, his words inspired a fundraising page on Facebook for the Athens County Food Pantry volunteers. 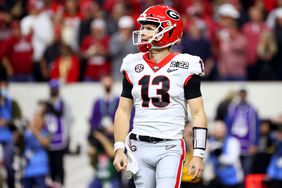