The “Great Balls of Fire” singer died today in Memphis.

Jerry Lee Lewis, the groundbreaking rock n' roll star whose piano-heavy hits dominated the charts in the 1950s, died today in Memphis, Tennessee. He was 87.

According to a release from his publicist, Lewis passed away after suffering from various illnesses throughout the years.

"He was there at the beginning, with Elvis, Johnny Cash, Chuck Berry, Little Richard, Carl Perkins, Fats Domino, Buddy Holly, and the rest, and watched them fade away one by one till it was him alone to bear witness, and sing of the birth of rock 'n' roll," the release added.

Lewis was born to a poor farming family in Ferriday, Louisiana, on September 29, 1935. He began playing the piano at a young age alongside his cousins, including future country star Mickey Gilley. His father was said to have mortgaged the family house to buy a piano.

Lewis is credited with helping to create the "rockabilly" genre, a hybrid of rock n' roll and country music.

Following in the footsteps of Elvis, Lewis made his way to Memphis, where he was signed by Sun Records in 1956. His first solo hit, "Whole Lotta Shakin' Goin' On" came in 1957 and was followed shortly by the iconic "Great Balls of Fire," "Breathless," and "High School Confidential." Though his career was soon marred by a marriage scandal, the wild performer known as "The Killer" was the first person inducted into the first class of the Rock and Roll Hall of Fame in 1986.

The Recording Academy honored Lewis with a Lifetime Achievement Award in 2005 and earlier this month, he was formally inducted into the Country Music Hall of Fame. Sadly, he was unable to make the ceremony due to the flu.

"It is with heartfelt sadness and disappointment that I write to you today from my sick bed, rather than be able to share my thoughts in person. I tried everything I could to build up the strength to come today—I've looked so forward to it since I found out about it earlier this year," Lewis wrote in a letter to fans. "My sincerest apologies to all of you for missing this fine event, but I hope to see you all soon. To be inducted into the Country Music Hall of Fame is the highest honor in Country music. Through over 60 years singing music professionally, country has always been the genre where I felt the most at home. Most of all, thanks to God for allowing me to experience this honor while I am still here."

Lewis is survived by his wife Judith Brown Lewis and his four remaining children.

Our hearts are with his family, friends, and fans. 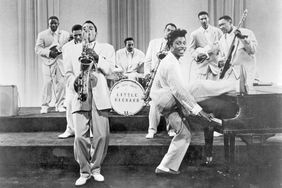