And you thought airbnb had cool listings.

It may not be an over-water bungalow Caribbean vacation fantasies are made of, but it's certainly unique.

Located approximately 30 miles off of North Carolina's coast, the Frying Pan Tower is a former Coast Guard light station that now operates as a one-of-kind bed and breakfast. Erected mid-sea on a modified Texas oil drilling platform, the structure retired from its Coast Guard duties in 2004. In 2010, it was purchased in an auction, and converted into an eight-bedroom abode, with bookings open to the public. (Don't expect luxury digs—the rooms here read more "dorm room chic" than "four star hotel." View them here.)

During a stay, visitors can soak up majestic panoramic views of the ocean and sky, as well as enjoy activities like fishing, billiards, hammock-lazing, skeet shooting, and golfing on the deck. As "off-the-grid" as this actual middle-of-the-ocean haunt may be, there's (somehow) high-speed internet.

WATCH: That Outer Banks Island That Swept the Internet by Storm Is No Longer an Island

When weasked owner Richard Neal if guests are expected to swim there, he chuckled and said he gets that one a lot. Fortunately, he explained, most visitors arrive via helicopter thanks to the facility's landing pad, or charter a local boat to drop them off at their seaside dwellings.

For reservations and to learn more, visit fptower.com. 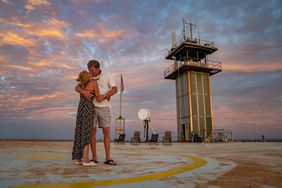 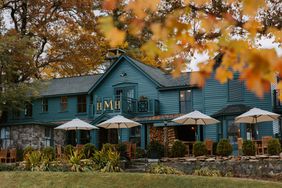